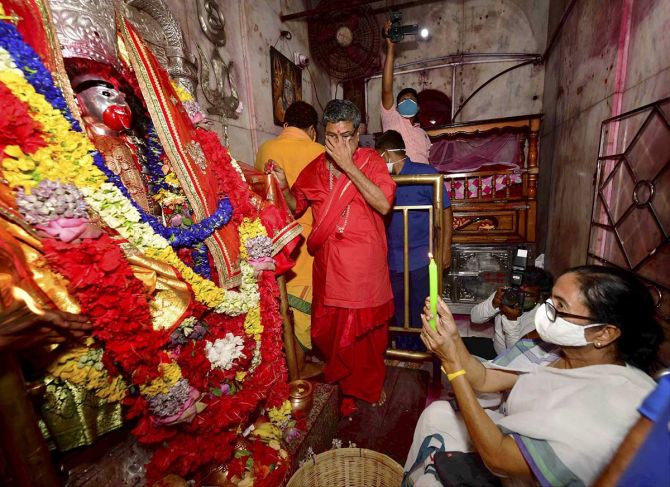 The electoral fate of four states and one Union territory will be announced on Sunday, May 2.

It has been a bitterly fought election campaign for West Bengal's 294 assembly seats. At play have been polarisation, communal politics, poetry and prose, perception politics, outsider-insider rhetoric, and even an injured West Bengal chief minister -- a riveting collage unlike any other Vidhan Sabha election.

And then, of course, the soul scarring second wave of the pandemic has finally put paid to election rallies in the state.

Will the incumbent Mamata Banerjee's Trinamool Congress score a hat-trick?

Or, will Narendra Damodardas Modi's Bharatiya Janata Party make history in Bengal? Modi, who has held seven rallies in the state, has now embraced the virtual mode for his rallies.

Udayan Bandopadhyay, columnist, author, political scientist and an associate professor of political science at the Bangabasi College in Kolkata, in an interview with Swarupa Dutt/Rediff.com, forecasts the winners, the losers, the also-rans and demystifies the factors that make Bengal elections so unique.

What would be your reading of the tea leaves in the Bengal election? Except for one or two phases the voter turnout has consistently touched 80 per cent.

It's difficult to say, but there is no high tide of anti-incumbency in Bengal and therefore I think the Trinamool Congress will return to power.

Don't go by the high turnout. In West Bengal it does not mean anti-incumbency.

The state has always had a history of around 75 to 80 per cent voter turnout and even if the turnout in certain phases (like the sixth phase with a turnout of 57 per cent) were low, don't read too much into it.

Ever since the second phase, the BJP has been hammering away that the game is over for the TMC. Khela shesh. For voters who are fence-sitters, will this kind of perception politics sway them to press the lotus button?

No, absolutely not. The BJP is doing this so that it can become the main Opposition party in the West Bengal assembly. The BJP knows it can't win Bengal.

Yes, perception politics is being played, but Bengalis are politically conscious, possibly the most politically aware people in this country, and they don't get taken in by such rhetoric, despite khela shesh being a consistent and long-playing rallying cry of the BJP.

In your experience, have you seen the BJP work a state with this kind of single-minded devotion towards winning elections?

It's difficult to say, but I think they worked with this kind of frenzy in Uttar Pradesh in 2017.

Among the five states going to the polls now, the BJP knows it will not win in Kerala or Tamil Nadu, so it is solely concentrating on West Bengal and Assam.

The BJP is already in power in Assam and in Bengal, it is banking on its surprising and amazing results from the 2019 Lok Sabha election where it won 18 seats with a 40.25 per cent vote share. The Trinamool was barely ahead at 43.28 per cent. 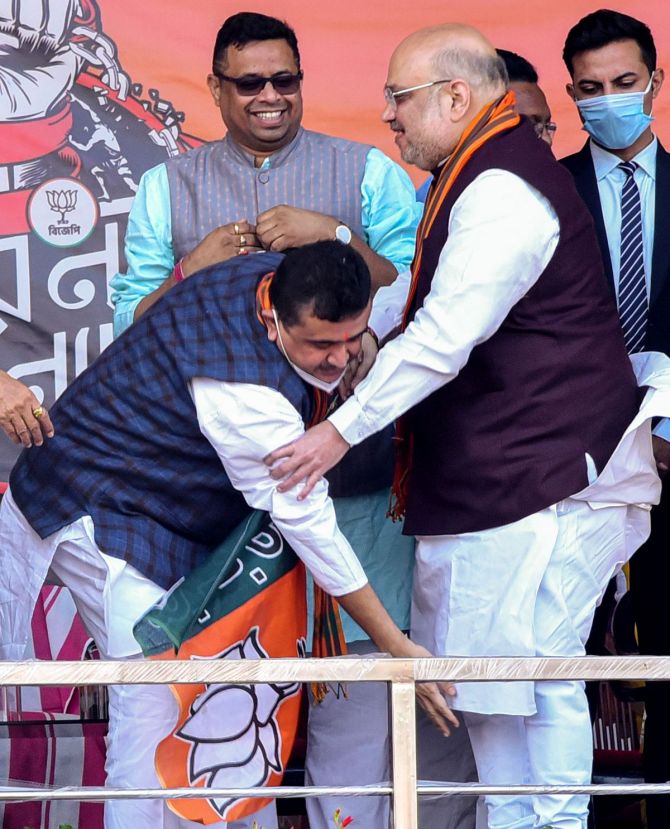 What about Suvendu Adhikari?

No, no. Suvendu Adhikari was a minister in the Trinamool Congress. (He was the minister of transport, irrigation and water resources and a member of the 15th and the 16th Lok Sabha). His father (Sisir Adhikari) was a TMC MP, his brothers are MPs.

Three to four months ago he defected to the BJP. In politically conscious West Bengal, it is impossible for create a groundswell of support so quickly for a party (BJP) he has earlier vilified.

Mamata will win in Nandigram. There is no doubt about it.

Yes, it may be that Nandigram is the Adhikaris' fiefdom, but a politician carries an identity. He used to say BJP is a janjaal (rubbish or garbage) party or cry 'BJP hatao desh bachao'.

This kind of rhetoric doesn't have any impact on the masses by and large. Yes, the fence sitters may give him a hearing, but their percentage is very low.

The politics of the candidate matters. Personal attacks don't carry any heft.

Adhikari has tried to communally polarise Nandigram, but has failed just as the BJP has failed to polarise the country however hard it tries.

Adhikari has referred to the CM as 'Begum Mamata'. It was a huge mistake. (Suvendu Adhikari at a rally in Nandigram on March 29 said: 'Election is knocking at the door. You are not giving votes to Begum. If you vote for Begum there will be mini Pakistan.')

He forgot that Hindus and Muslims fought together in the Nandigram land acquisition movement.

In fact, what Adhikari has unintentionally done is to ensure that the minority Muslim vote in Nandigram goes to the TMC.

It is utterly immature politics.

Adhikari's language and allegations during the campaign trail are so communally charged, I would say not even a Yogi Adityanath has stooped so low. Never mind Modi, Shah or Nadda.

Adhikari was trying to corner the 70 per cent (Hindu) votes in Nandigram. He won't get it.

What about Swapan Dasgupta -- the BJP candidate from Tarakeshwar -- and Dilip Ghosh (the BJP's Bengal chief)? Can't they be regional leaders? At least they speak the language.

Anirban Ganguly (the BJP candidate from Bolpur) and Swapan Dasgupta are genuinely good candidates, but the people of West Bengal are unfamiliar with them since they are Delhi based. They are newcomers to Bengal.

Dilip Ghosh is popular especially among young voters, but he has been sidelined in this election in favour of Suvendu Adhikari. Ghosh attracts voters who want the TMC to lose at any cost. He has worked really hard for the BJP all these years, but this time around, the party has sent him to the bench.

If the TMC as you say, wins, what will be the primary factors responsible?

Kishor has changed the organisational structure of the party and launched a programme like Duare Sarkar (the government at your doorstep). He will be a huge contributory factor if the TMC wins.

And, of course, primarily Mamata Banerjee. She is the face of the party, she is the TMC. The BJP doesn't have a single person in Bengal matching her stature. 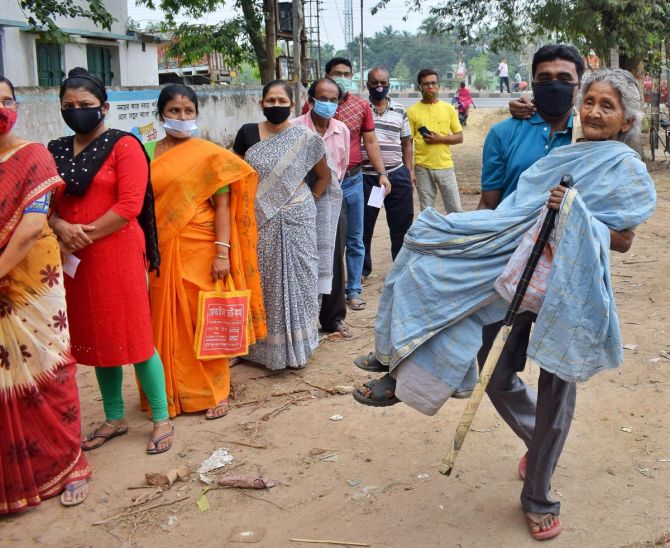 IMAGE: An elderly woman being brought to a polling booth to cast her vote in the 6th phase of the West Bengal assembly polls in Nadia. Photograph: PTI Photo

What is the most unique factor in the voting pattern in Bengal?

I think if the electorate wants a change in government, then they vote en masse towards the change. The change is reflected in the party getting an absolute majority and forming government.

They vote in such proportions that there is no question of a hung assembly.

So Mamata Banerjee's apprehension that the TMC must win more than 200 seats to ensure horse trading does not take place is unfounded?

I think she is playing to the gallery. If the Trinamool Congress gets more than 200 seats the fear of horse trading is out of the question.

I am in favour of Prashant Kishor's numbers for the BJP -- not more than 99.

How has the Congress been reduced to third position? Is there a leadership crisis at the state level as well?

Again, it is the lack of a regional leader. Adhir Ranjan Chowdhury is not a leader of the Bengali people; he is a leader of only Murshidabad.

He cannot attract the Bengali intelligentsia.

The Congress is a sinking ship.

The BJP will become the principal Opposition in the West Bengal assembly and in future it will be a battle with the TMC in civic polls and in the Lok Sabha elections. 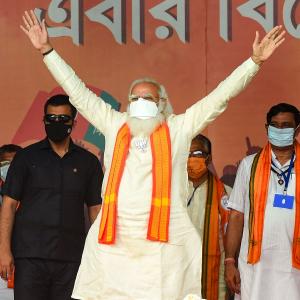 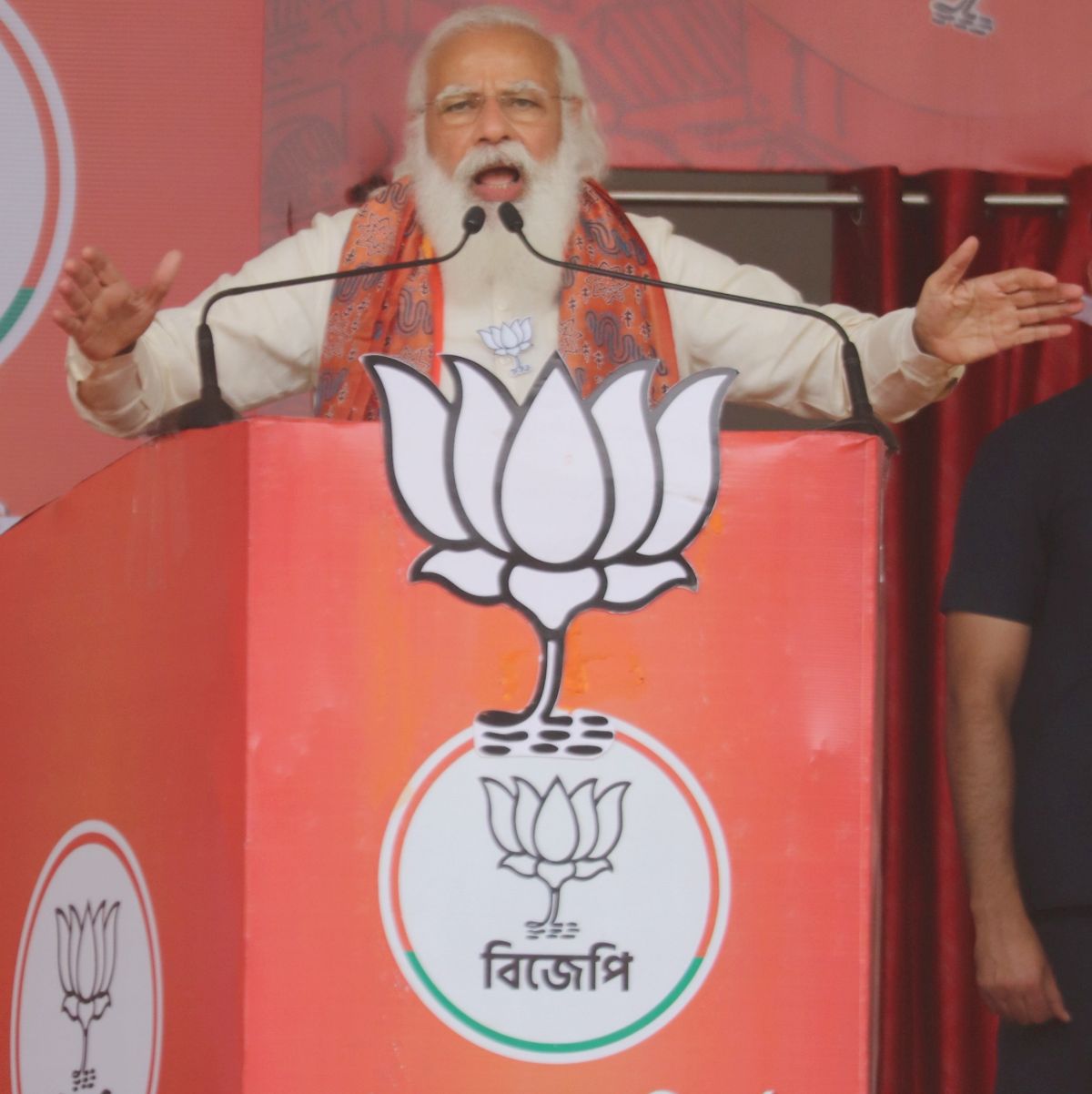