News
Business
Movies
Sports
Cricket
Get Ahead
Money Tips
Shopping
Sign in  |  Create a Rediffmail account
Rediff.com  » News » How we can DEFEAT COVID-19

'If people are not cooperating and do not follow policies laid down by the government or follow scientific infection control management, then all will be lost.' 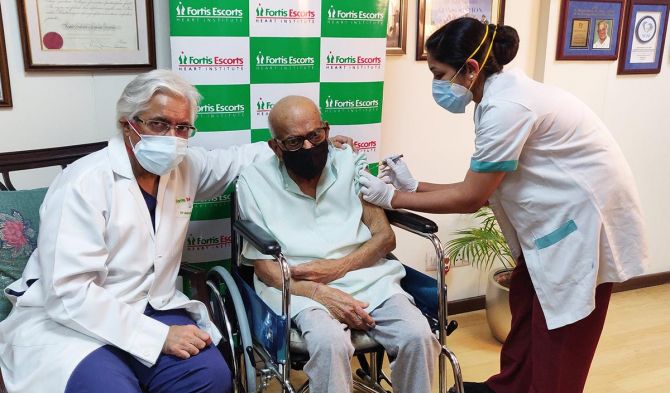 This last year, as India came to grips with COVID-19, a disease no one knew anything about, like the rest of the world:

There were some mistakes.

There were some successes.

Dr John Victor Peter analyses what went wrong and what went well and offers lessons for the future.

He vitally includes what we have to do to stop ourselves from becoming hosts of the COVID-19 virus.

Dr Peter is an intensive care specialist and the director of the Christian Medical College, Vellore, Tamil Nadu, who has worked and trained in Australia.

From the perspective of science, a vast majority of the scientific community, globally, was lost when COVID-19 first hit.

This is a very powerful statement I'm making.

But this is based on several things that have happened over the last six months.

(At the start of the COVID-19 pandemic) evidence-based medicine went out of the window!

And was replaced by medicine based on eminence, eloquence, vehemence, whatever you want to call it. 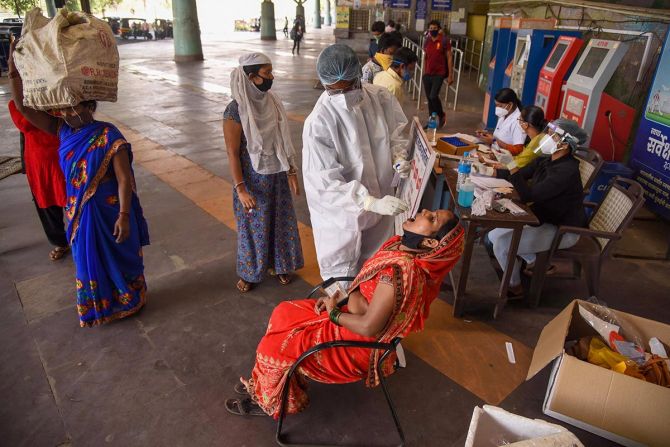 IMAGE: A medic from the NMMC Hospital takes a swab sample from a commuter for COVID-19 testing at the Turbhe railway station in Navi Mumbai, March 15, 2021. Photograph: PTI Photo

Many treatments or therapies were tried for this new disease.

We need to try new therapies.

But these new therapies should have been tried in a very scientific manner, through properly conducted trials.

This has been a global problem.

A classical example, I can give, is convalescent plasma.

I recently read a report from the US that 52,000 patients received convalescent plasma.

By the end of it, scientists were not wiser if it really works or not, because they didn't have a comparative (study) arm to show that in those, to whom you did not give it, fared better or worse.

It was the same for other (expensive) treatments like hydroxychloroquine, remdesivir, tocilizumab.

I know many people in the country who used costly drugs like tocilizumab.

We didn't use it because each dose is Rs 40,000 and there seemed to be accumulating evidence that it doesn't help and it may actually harm. 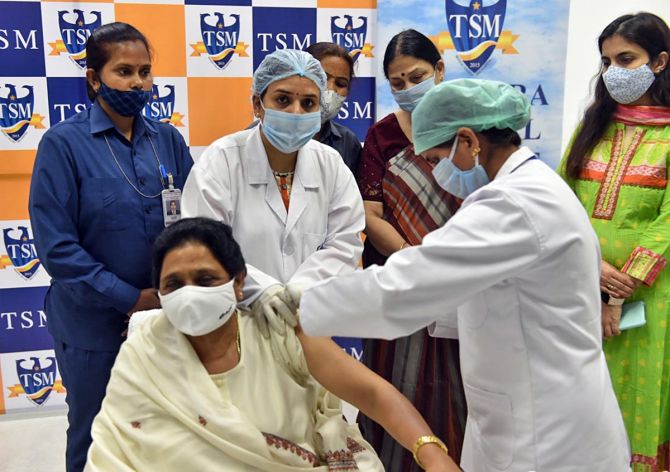 The scientific world has really woken up only over the last few months.

And there are some very good quality trials that are happening now.

A classical example is steroids.

Well-conducted trials have actually shown that, in an appropriate setting, steroids can improve the probability of survival.

And even in our own Indian context, we saw that the survival improved dramatically after the introduction of steroids in a systematic manner. 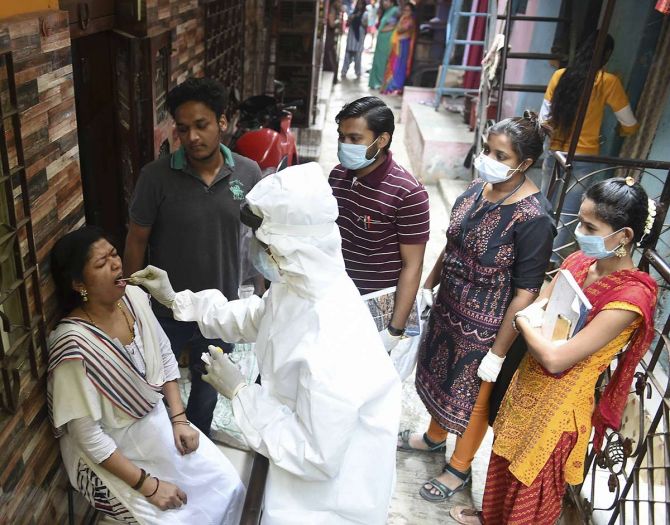 With respect to science, our understanding of the disease has exponentially increased over the last six months.

There's definitely a lot more confidence in the scientific circles that this disease is not as bad as we thought it was first.

As an intensive care specialist, I can say this with confidence, because there are certain types of respiratory support that we offer in the intensive care which was refined.

Subsequently we saw a dramatic reduction in the deaths due to severe COVID-19.

This has been seen globally.

We need to continue to work on this such that, if and when the second wave hits, and we don't still have a vaccine, we can continue to save more lives. 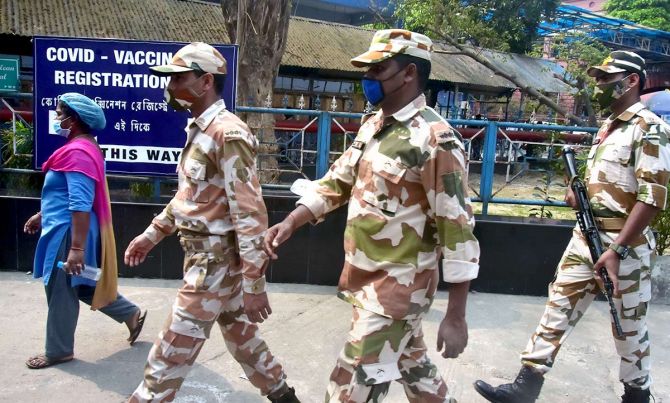 IMAGE: Security personnel deployed ahead of the assembly election in Bengal arrive to get the COVID-19 vaccine at the SSKM govt hospital in Kolkata, March 11, 2021. Photograph:ANI Photo

The third issue related to science has an important bearing on the natural cause of the disease globally.

Let me explain it this way.

I had a conversation with a group in Melbourne.

In some populations (like Australia), we have less than half a percent of the population who have been exposed to the disease.

They are a ticking bomb in one sense.

Whereas in India we are over the first peak (this conversation was recorded in December 2020).

I'm quite sure about that. 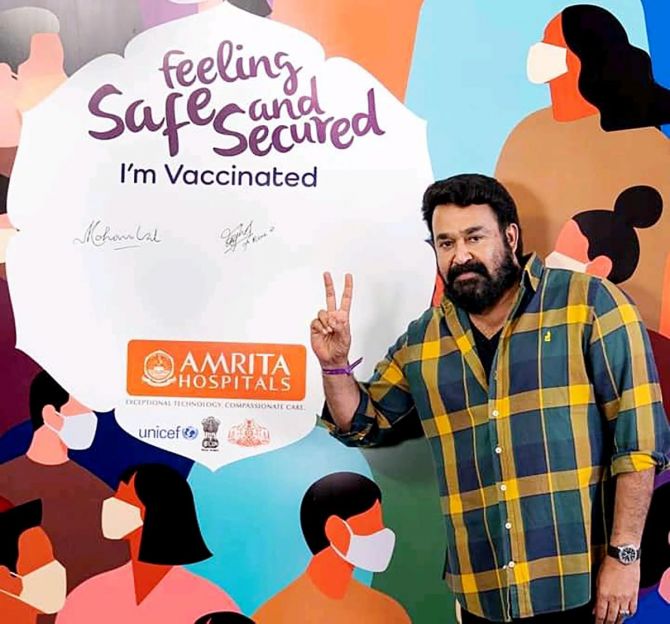 IMAGE: Malayalam movie superstar Mohanlal flashes the victory sign after getting the first shot of the COVID-19 vaccine at a hospital, in Kochi, March 10, 2021. Photograph: Photo: ANI Photo

Sero-prevalence studies have shown that 30 per cent of the population have already been exposed to COVID-19.

The sero-studies tell us that a large population have developed the infection (but maybe many were asymptomatic) and some response to it.

Chennai, I am told, the sero-prevalence is probably a bit high.

I don't have the data.

I've not seen the data personally.

But in rural pockets it is extremely low.

We are saying roughly 30 per cent based on a mix of people from different populations.

There's an interesting quote told about how a statistician who put one hand in ice and the other hand in boiling water and said I feel fine, because the average was in between. 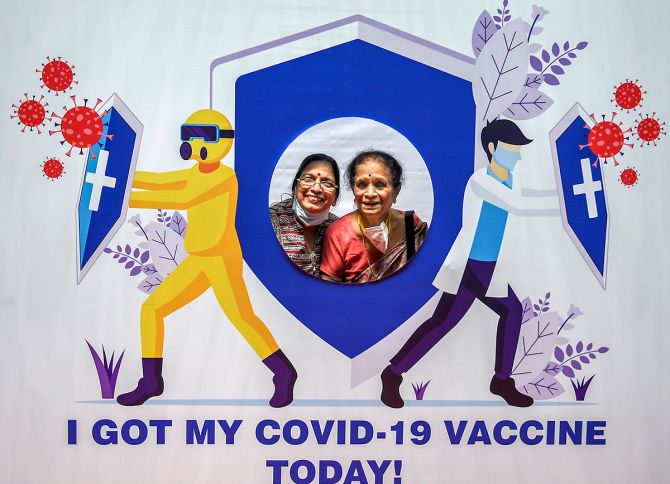 IMAGE: Senior citizens pose for a photograph after being administered the COVID-19 vaccine at the SRCC Hospital in Mumbai, March 6, 2021. Photograph: Kunal Patil/Photo

This is difficult to say because we do not know whether this disease offers lifelong protection and immunity.

But if you look at it from that perspective (that an attack of COVID-19 gives immunity), in a way, India may be better off, in terms of opening up economies, opening up its business, because a large segment of the population is immune.

If I look at countries like Singapore, Australia, New Zealand -- those countries have had very, very small exposure.

They will find it very difficult to open up international borders in a hurry, without a vaccine, because the people who come in can cause the disease to explode there. 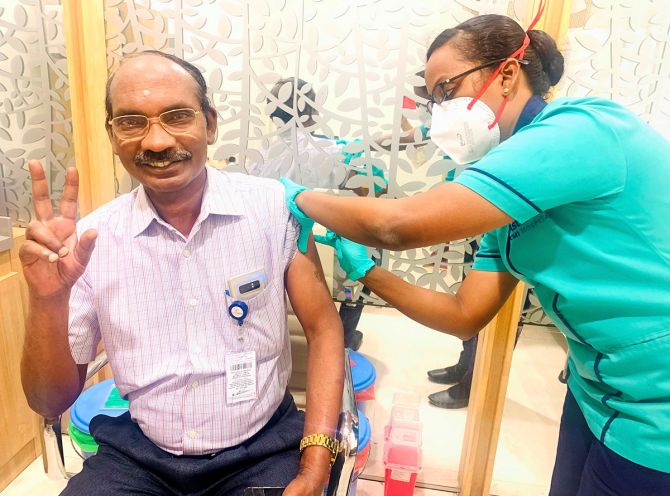 Finally, there is the whole issue of the vaccine.

Vaccines need to be thought through very carefully in India.

particularly because we have a huge population.

Even if we have doubled the capacity of vaccine production, you will not be able to be meet the needs of the entire country in a hurry.

So, the first group to get the vaccine should be the frontline workers.

But after the frontline who will you vaccinate?

Is it the vulnerable?

Or the group which is going to spread the disease, for example like a young school-going student, who is totally asymptomatic and not aware and will spread it to hundreds of people before one actually find out he is COVID-19 positive.

These are very challenging questions, that policymakers have to sit down and think through: Who will they vaccinate. 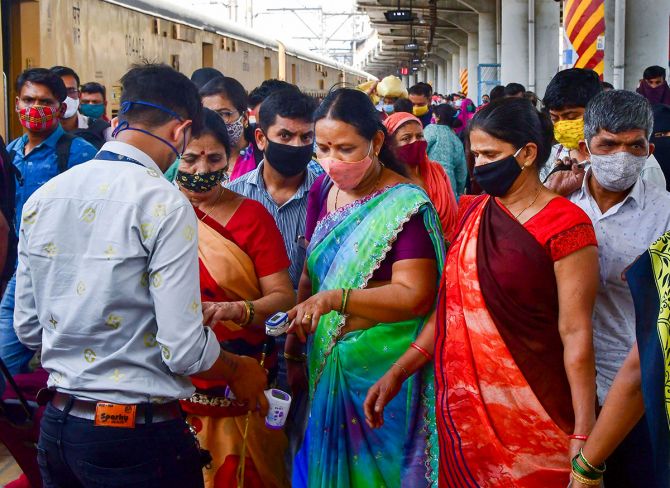 The initial response of people was fear, panic.

This was mainly because of the intense period of isolation and stigmatisation, that was painful to watch.

We are well over that.

We have learned that this is not a disease that needs to be stigmatised.

We need to have isolation and safe practices.

Now, I think, people are moving to the opposite end of the spectrum.

Many are casual and careless in their infection control practices.

So where do we strike the balance?

Yes, the disease is not as bad as it appeared to be, but there is still a considerable amount of morbidity and mortality associated with it. 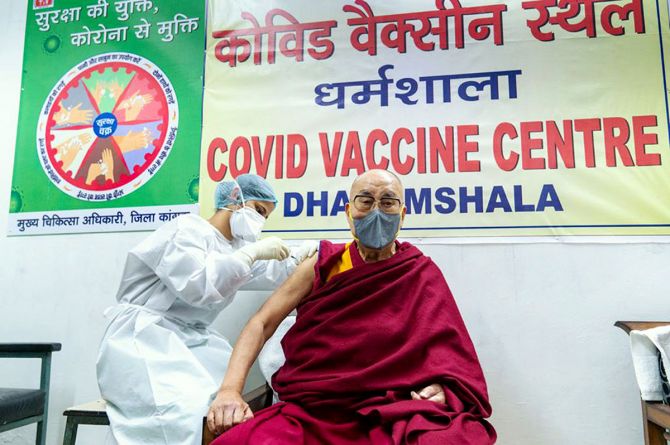 IMAGE: His Holiness The Dalai Lama gets the first dose of the COVID-19 vaccine at the Zonal Hospital in Dharamshala, March 6, 2021. Photograph: Shailesh Bhatnagar/ANI Photo

In a country like India, unfortunately, adherence to infection control practices and protocols have to be enforced, because (ensuring adherence) is very difficult in India, even among educated people.

For example, I was speaking to my colleagues in Melbourne.

It is not enforced, but people respect other and wear masks.

In a country like ours it doesn't work on simple respect for each other and therefore one wears a mask.

We probably need to have it enforced.

There's already a strong push to enforcing it, fines etc.

There's a lot of media outreach programmes that keep emphasising this.

A lot of the lack of adherence to this infection control practice is due to pandemic fatigue.

That is a challenge.

The other challenge we are now facing is home isolation.

People who are doing home isolation are wandering in the street!

We have to have responsible citizens, if we are to contain it.

So, in terms of moving forward, science may do well.

Policy may give you the right answers on how to deal with COVID-19.

But if people are not cooperating and do not follow policies laid down by the government or follow scientific infection control management, then all will be lost. 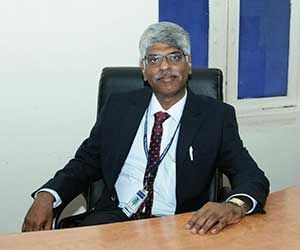 Response to any infection is dependent on three factors -- we used to draw triangles -- the drug, the bug, and the host

You have to have the right drug to deal with the bug.

We are still to have the perfect solution and we hope vaccine coverage.

We now know a lot more about the bug, and that it is as curable as many other bugs in terms of death rates or infection fatality rates or mortality rates.

But it also depends on the host.

Not only the host's (physiological) responsive factor, but it's also about the host's behavior.

*The views expressed in this article are Dr Peter's personal views and do not necessarily represent any institution's viewpoint. 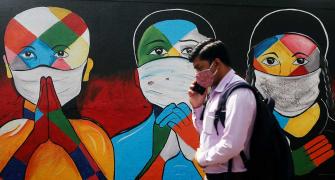 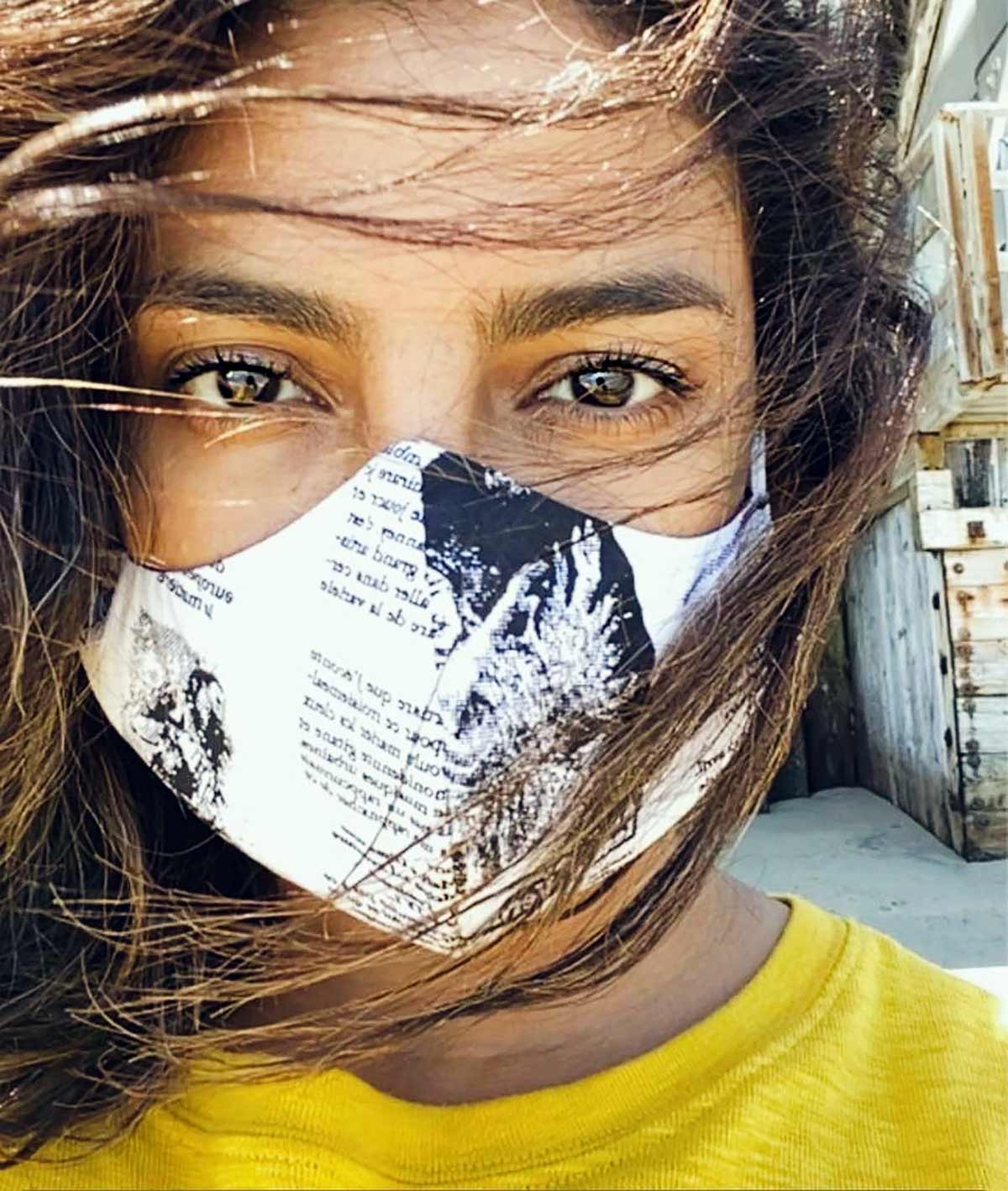 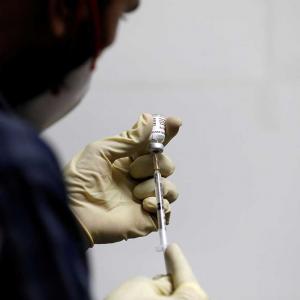