'For the first time Muslim men will be held accountable' 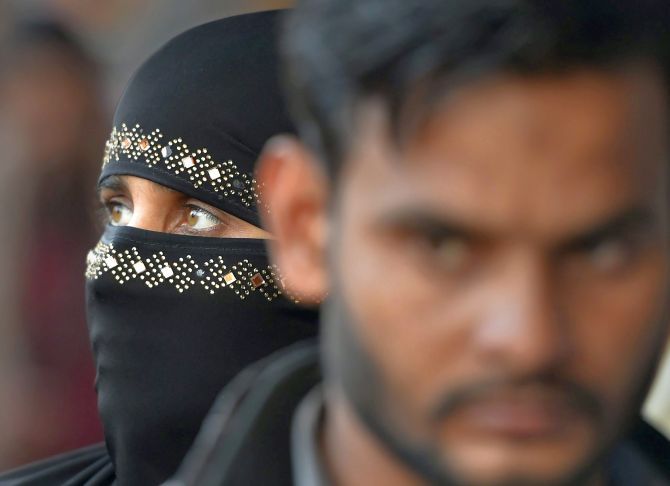 And the reason is the approval of landmark instant triple talaq in the Rajya Sabha on Tuesday, July 30, 2019.

The passage of the Muslim Women (Protection of Rights on Marriage) Bill that makes instant triple talaq among Muslims a criminal offence with 99 votes in favour and 84 against, was a major legislative success for the Bharatiya Janata Party-led National Democratic Alliance in the opposition-dominated Upper House where it lacks a majority.

The bill failed to pass the Rajya Sabha hurdle early this year during the first term of the Narendra Modi government even though it was approved by the Lok Sabha.

The Lower House had passed the Bill last week and once it gets Presidential assent, the practice of Muslim men instantly divorcing their wives by uttering 'talaq' thrice will become a criminal offence, punishable by a jail term of up to three years.

'The Congress government should have brought this talaq bill in 1955 when they brought Hindu Marriage Bill. They did not bring it then because of politics and therefore Muslim personal law could not be reformed,' Zakia, below, tells Rediff.com’s Syed Firdaus Ashraf.

Your first reaction to the instant triple talq bill being passed in Parliament.

It is a very welcome development.

It should have been passed earlier only but then it is okay.

Do you think the practice of instant triple talaq will stop now in India?

It will not happen overnight.

Any law which comes into effect takes time to be implemented on the ground.

In our (Muslim) community there is lack of awareness, education.

There is so much poverty and backwardness.

But with the law, a process will begin though.

Opponents of this bill say that now Muslim women can blackmail their husbands and this will create a rift in families.

Does it mean that Muslim women are some demonic creatures while Muslim men are angels?

It is certainly not women.

This is how the opposition to dowry law and Hindu marriage law happened.

Any law that gives rights to women (faces such opposition).

This is always the old plank of patriarchy.

You will not control yourself but blame women.

If you are so fearful why are men doing wrong things? The fear is that Muslim men will be thrown into jail because of falsehood.

This has never happened.

Women have always been given a raw deal till now.

Although I do not believe this is a man versus woman (battle).

But if you see the past experiences, who are the people who are really guilty of misconduct or guilty of violations?

It is certainly not women.

For the first time Muslim men will be held accountable so opponents of this bill have already started demonising women.

What bigger example do you want of patriarchy at play?

Now that the bill has passed, the practice of instant divorce by Muslim men will invite a jail term of up to three years. At the same time they have to pay maintenance to their wives.

If the husband is in jail then how will he pay the maintenance?

He anyway was not giving maintenance.

When a man can give instant triple talaq to woman on her face or for that matter even when she is not present in front of him, how can you expect that man to pay maintenance to her?

Who gave them this misinformation?

Suddenly they are thinking of women's maintenance now!

Earlier they never thought about it.

What about criminalisation of this law? There is a feeling among Muslim men that only they are being targeted whereas people of other religions are not.

Every religion has it.

But not for divorce.

It is not there because the divorce process is regulated in Hindu law.

If they had agreed to our demands that Muslim law needs to be regulated, where there had to be provisions and safeguard for Muslim women (things would have been different).

But they never spoke about it.

Don’t you think Muslim men will be considered as criminals for divorcing their wives in instant triple talaq?

In dowry too there is criminalisation.

In bigamy too there is seven years imprisonment.

The question arises as to how many really go to jail.

Wherever there are provisions in our law for sending men to jail (in marriage laws), punishment is not given to men as our system is patriarchal.

When the Supreme Court had declared instant triple talaq as illegal, what was the need for this law?

Many murder cases come to the Supreme Court and people have been convicted for murder.

Does it mean at other places murders will not take place?

If there is murder then section 302 will come into effect.

A Muslim woman cannot roam from door to door with the Supreme Court judgment saying that her man has given her instant triple talaq.

How will this Muslim woman enforce the Supreme Court judgment without a law?

When the Supreme Court ordered maintenance to divorced Muslim women in the Shah Bano case way back in the 1980s, over two lakh Muslims turned up on the streets of Mumbai to protest against it and in fear then prime minister Rajiv Gandhi overturned the apex court order.

This time Muslim society seems to have quietly accepted the judicial verdict. What has changed?

Because misinformation is not there in Muslim society (any more).

They know that Islam is a gender justice religion.

Earlier all this information was with some conservative ulemas and Muslim personal law board members.

But now because of Internet people have access to knowledge.

They are more aware of what is right and wrong.

In future do you think Muslim men will fear to say instant triple talaq because of this law?

To do wrong things, men must fear.

Till now they did not fear because nobody told them they were wrong.

Somewhere there is a feeling in the Muslim community that the Modi government is pushing its Hindutva agenda by passing this bill.

The Congress government should have brought this talaq bill in 1955 when they brought in the Hindu Marriage Bill.

They did not bring it then because of politics and therefore Muslim personal law could not be reformed.

The Congress gave Muslim conservatism support and here the BJP saw a window of opportunity.

Now you cannot blame Muslim women for that.