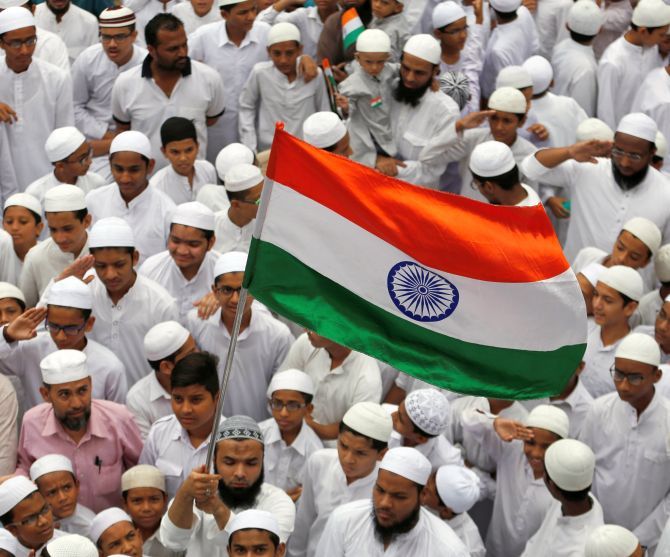 'In the name of cultural nationalism, Modi wants to impose another ideology on Muslims.'
'His agenda, we feel, is saffronisation of Indian culture.'

The general secretary of the Indian Union Muslim League, below, left, will be unhappy with Thursday's Allahabad high court verdict holding triple talaq as unConstitutional, something which violates the rights of Muslim women.

The IMUL took a very strong stand against the Narendra Modi government's decision to have a national discussion on the Uniform Civil Code.

Why did you start a campaign against the Uniform Civil Code?

There are certain religious laws pertaining to marriage, inheritance, divorce, property rights, etc and they are governed by Shariat law.

It means the law of God and in another words, it's a divine law.

We human beings are not empowered to amend the divine law.

That's why we are taking a very firm stand not to amend the Shariat law and not to go for a Common Civil Code.

You cannot amend it and we don't feel that any amendment is required.

Some Muslim women say that a law like triple talaq is very unfair to them...

I would say that some women are exaggerating the entire thing.

The population of Muslims in India is between 14 and 15 per cent.

Among the divorced women also, how many triple talaqs happened? It is a very miniscule percentage.

I would say this is not the major problem the country is facing.

The issue of triple talaq is an issue that is being exaggerated by the BJP(Bharatiya Janata Party)-led government and some women to tarnish the Muslim community as a whole.

Then, about triple talaq also, there are different schools of thought.

Some Muslim sages say it is allowed while some sages don't agree. What I mean to say is that among the learned people also, there is a difference of opinion.

No government can intervene in religious matters.

I am not saying that it is not an issue. What I say is a small issue is being exaggerated by the so-called critics of triple talaq.

Tell me the number of ways in which a girl child and a woman is discriminated in India.

For example, if you look at the crime records in India, you will see that women suffer domestic violence the most and the reason for that is alcohol consumption.

Thousands and thousands of women are suffering due to this evil. Is alchoholism not a bigger issue than triple talaq?

Why is nobody fighting these kinds of evil?

The women's liberation movements and organisations involved in those kind of activities are not addressing the real grievances faced by women.

They only want to find fault with small issues like triple talaq.

Most importantly, religious matters cannot be decided by political people.

Not even by the court?

Okay, let's assume someone goes to court and the court passes an order.

What happens next? It becomes the law of the land.

But look at the Shah Bano case. The court passed an order, but using the law-making power of Parliament, the Rajiv Gandhi government took a decision to nullify the court verdict.

Similarly, anything can happen in a democratic country.

Why do you feel that the Centre is trying to impose the Uniform Civil Code on Muslims?

We feel that Modi has an agenda. In the name of cultural nationalism, he wants to impose another ideology on Muslims.

His agenda, we feel, is saffronisation of Indian culture.

Whether it is religion, education or culture, they (the BJP) want to saffronise it.

In the case of the Uniform Civil Code, it is Fundamental Rights against the Directive Principles of the Constitution.

They talk about Article 44 of the Constitution which is a Directive Principle.

We want to say what about Articles 25-28 what says that freedom of faith and freedom of religion are guaranteed as Fundamental Rights.

These people say you keep the Fundamental Rights with you, but we take away the Directive Principles.

This argument for the Uniform Civil Code is improper and against the Constitution.

The prime minister and his ministers said the Centre only wanted a discussion on this issue.

Once we agree to have a dialogue on the Uniform Civil Code, the implication will be that we are prepared to change it.

Then we have to discuss how to amend it, which will be a delicate situation.

You also said that implementation of the Uniform Civil Code will affect the secular fabric of the country.

What our Constitution guarantees is the freedom to practice each one's religion. That is the beauty of this nation.

If you say that this diversity is not required, it kills the secular nature of the country.

Diversity in religion, language and culture should continue.

So you feel the status quo is good enough and no change should be done?

Not even an iota of change is needed.

The present situation should continue.

If the BJP goes ahead with their propaganda that the Muslim community denies freedom to our women, we will try to enlighten people on what Islam is.

We will also do political propaganda by discussing this issue with secular parties, like-minded people and even women's organisations.

We will open up wide propaganda against the ill-motivated move by the BJP.

The secretary of the Bharatiya Mahila Muslim Andolan said the other day that there was no gender justice in Islam...

She doesn't know what Islam is. I only suggest that she read the preachings of the Prophet and the Holy Quran.

With all humility, let me say that Islam is a religion that gives freedom and prestige to women.

Islam ensures equality and justice to all.

You can see how women are treated in all the Muslim countries. Her observation is not right; it's only her imagination and nobody can agree to that.

Like many say, do you feel the country has become intolerant now?

Yes. Things are going from bad to worse in different parts of India and in the name of religion, people are fighting amongst themselves.

This kind of violence is highly objectionable and bad for the country.

As a Muslim, do you feel unsafe after the BJP came to power at the Centre?

Even though the BJP is indulging in violent activities, I don't think India is unsafe for Muslims as Indian democracy is alive.

India is the safest place in the world.

Whatever be the wicked actions of the BJP, I still believe that India is safe for a Muslim person.

That is because democracy succeeds here.

This is my most special comeback, says Karthik