News
Business
Movies
Sports
Cricket
Get Ahead
Money Tips
Shopping
Sign in  |  Create a Rediffmail account
Rediff.com  » News » 'If people die of hunger, that will be a great shame for the nation'

'If people die of hunger, that will be a great shame for the nation'

'Everybody should be given rations. Nobody should be excluded.'
'Without an income, the present ration quota is not enough.'
'They should increase it so that one person can eat adequately for a month.' 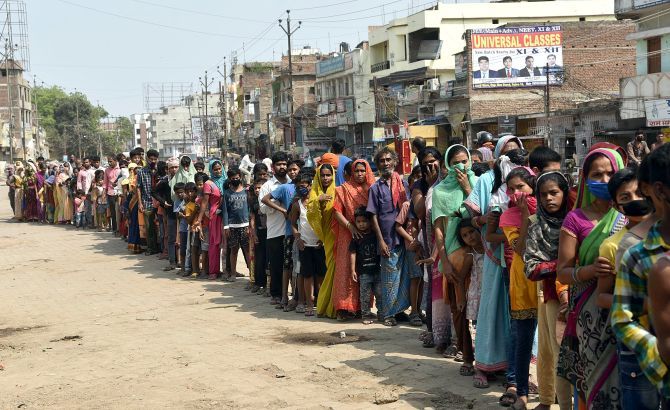 "Extraordinary circumstances call for extraordinary measures. Our country has a buffer stock of grain. At this time of crisis, the government should universalise ration, only then is it possible to cater to the demands of people at a short notice," Saurabh Kumar -- regional manager, ActionAid for Bihar and Jharkhand which has been providing dry rations to people in certain districts in those two states -- tells Archana Masih/Rediff.com.

Migrants are been among the most vulnerable groups affected by the lockdown.
What is the best way for the government to provide food and rations to migrants stranded in different parts of the country and to those who have managed to return home?

Our country has a buffer stock of grain. At this time of crisis, the government should go for universalisation of ration, only then is it possible to cater to the demands of people at a short notice.

How can that be done? Should ration be given to all for free?

No, the minimum stipulated rate of Rs 2 or Rs 3 a kg should be charged, but at least ration should be provided to anyone who is coming to procure it at the ration shop.

Firstly, the dealer who brings the ration to a village has a fixed quota. Suppose he has a quota of 50 or 80 quintals, he will first have to satisfy the demand of his existing ration card holders and will only sell whatever remains to those who are left out.

If the dealer cannot procure extra grain from the Food Corporation of India and bring it to the village, how will he be able to sell to those who don't have ration cards and hence fall outside the purview of the public distribution system?

This group of people will have no access to the ration.

So that is a question that needs to be answered and the government has to have some provisions for this.

This is the second phase of lockdown and many are complaining about insufficient food.

The problem is about those out of the purview of the ration card. So what you are saying is that every person who comes to a ration shop should not be given ration even if s/he does not have a ration card?

Many of those who ran egg roll stalls, pani batasha thelas or meat walas have not had any income for over a month and are in great distress.

If people from this group don't have ration cards, they are falling deeper into distress.

We must understand that people like you and me will not go to a ration shop, only those who need it most will queue up outside a ration shop.

Even if there are 5% people who are not eligible and misuse the provision which is basically for the poor, it will not do much harm to the nation.

But in the attempt to keep those 5% out, we cannot risk depriving others who need it most.

If people start dying because of hunger that will be a greater challenge and shame for the nation.

To save some money, the government would have negated the herculean effort it is making to feed people.

Hence, the government should not exclude but include all as far as providing ration is concerned.

How much ration should be provided at this time of crisis?
Should the government increase the stipulated quota per person since people can't access the market or earn a living during the lockdown?

The extremely impoverished families get 35 kg grain per month, the rest get 5 kg per person -- like 3 kg rice and 2 kg wheat -- depending on the number of names included in one ration card for a family.

If a family member's name gets left out, s/he is not entitled to the 5 kg of grain.

The stipulated quota is 5 kg per person per month. The government should increase the per person quota because these are unusual circumstances.

When people have earning wages, they have means to supplement their food requirement with that income.

But without an income, the present ration quota is not enough. They should increase it so that one person can eat adequately for a month. What should be done for those who do not have ration cards or have some problem related to their names and are thus being deprived of ration?

Those outside the purview of ration cards are being enumerated right now, but it will take some days before it gets ratified by the block.

It does not help if this relief comes ten days later when people need it right away.

The difference between providing ration and a cash transfer is that when you transfer ration, you can see how much a person has picked up, but with cash transfer you don't know whether s/he has access to the local market and what are the prices the food grains are available for.

As it is, the price of food has gone up these days.

The government has a well-constructed system of midday meals in villages. There are cooks and kitchens in school buildings. If the government provides ration, then it can use this existing infrastructure to feed people.

With a little monitoring, this can be done effectively.

Those in quarantine and isolation centres get two meals a day, which is mostly khichdi. Adequate ration should be provided so that they can get at at least three good meals.

Being away from home with no TV or radio, these migrants are already morose, the least we can do is provide them good food.

The other point about quarantine centres is whether it has separate provisions for women and is disabled friendly. If it has proper toilets facilities separate for men and women and is clean.

You have to provide for them adequately and with dignity if you want them to stay put and not run away.

Another aspect is whether the rural health infrastructure is equipped to deal with the current crisis.

Vaccinations and routine health activities have disrupted and affected. All this should have continued with social distancing.