The government has an opportunity right now to save Indians from deep recession, and in many cases, starvation, notes Kalyan Singhal. 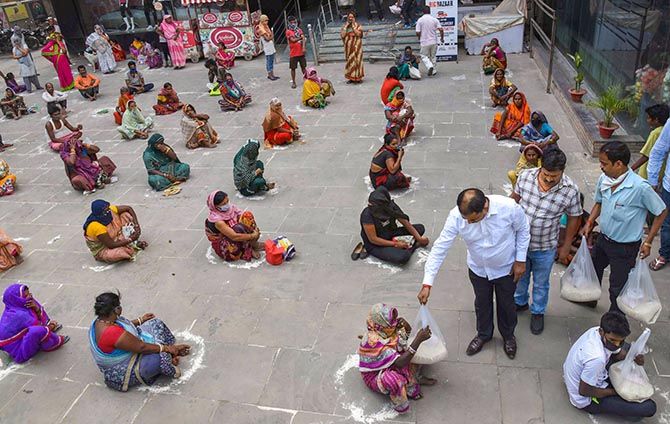 Thanks to the imaginative leadership of the Indian government, India is the first country in the world to implement a total lockdown to protect its citizens from the lethal coronavirus.

However, the Indian government's current economic package of Rs 1.7 lakh crore (or about one percent of the GDP) is totally inadequate.

A large part of India's population needs more support if it is to endure.

Any difficulties they face in these desperate times will undo the benefits of social distancing and put India back many years, and that will cost far more in the long run.

The recently passed US economic package to remediate virus-related harm is about ten percent of its GDP.

The US is now planning to devote a further 10 percent of its GDP to a second economic package.

Given its poverty, India would need a larger share of its GDP than the US to alleviate the effects of this crisis.

The lockdown could bring great hardship to low-income citizens who constitute about 70 percent of India's population.

Unlike the remaining 30 percent, these people are not part of the organised economy and, because they have no savings, the day they don't work is a day that they and their families don't eat.

According to the United Nations's International Labour Organisation, 'about 400 million people working in the informal economy in India are at risk of falling deeper into poverty due to the coronavirus crisis which is having catastrophic consequences.'

Unlike the US, India does not have such social safety programs as food stamps and unemployment insurance.

Furthermore, tens of millions of low-income migrant workers have now left their urban places of employment to return to their rural villages.

The 70 percent have no medical insurance and no money to pay for healthcare.

Some may have inadvertently carried the virus with them to their villages, which have very little in the way of healthcare facilities.

India does not have anything that resembles US Medicaid which allows the poor without insurance to get emergency medical help.

While those in the top 30 percent income group will on the balance benefit from the lockdown driven lower probability of getting the infection, it is doubtful whether the 70 percent will be better off.

They will be certainly further pushed down the poverty scale, suffer malnutrition, and in many cases, face death by infection or starvation.

The fate of the 70 percent therefore depends on what the Indian government does next to ensure them food and healthcare.

Because over 70 percent of India's population has little money to spend, not only could many people starve, but the prices of some necessary goods could crash as well.

The government has an opportunity right now to save Indians from deep recession, and in many cases, starvation.

A revised plan should increase spending across the board, particularly on income support and the supply of food grains.

I offer five recommendations for how India's government should proceed:

Copyright, Kalyan Singhal.
Kalyan Singhal is the McCurdy Professor of Business at the University of Baltimore.
Since 1992, he has edited Production and Operations Management, one of the top 20 business journals on the BusinessWeek list.
Ksinghal@ubalt.edu
Any publication in any country is free to publish this article after informing the author via email.