'Mamata is an emotional person, she follows her heart.'
'We loved that Didi, we still love her, but she is a changed person.'
'Why and how the change happened, who is responsible, I can't say.' 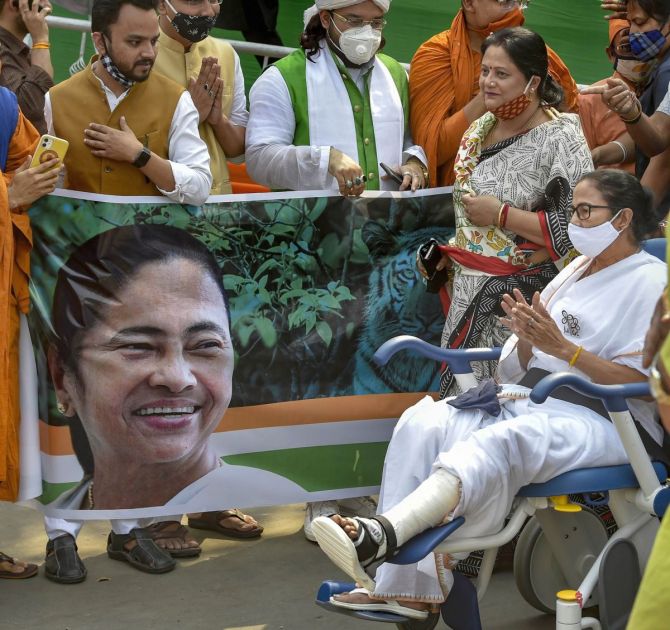 Baishali Dalmiya and Jitendra Tiwari (below), two Trinamool Congress leaders out of the many who made a beeline for the Bharatiya Janata Party ahead of the West Bengal assembly elections, told Swarupa Dutt/Rediff.com in the first part of the interview what was wrong with the party they left behind.

In the concluding segment of their interview, Dalmia and Tiwari speak of their experience with the BJP, and what went wrong with Chief Minister Mamata Banerjee.

You have moved to a right-wing party from a party with secular credentials. Ideology doesn't get in the way, does it?

Baishali Dalmiya: I joined politics in 2016 to serve the people of West Bengal. In these years with the TMC, I realised that no developmental work can be done if you stay in the party.

The TMC now has people only interested in making money, are into illegal activity and dupe both the public and the government. People have elected me because they want me to work for them.

The TMC is not the place where you can do anything for the people. You stay in the TMC only if you want to make money. I am not interested, that's why I joined the BJP.

Jitendra Tiwari: I was born in a Hindu home and I don't think that talking about Hindutva or protecting your religion is going against secularism.

When I was with the TMC, I had built a Ram Mandir in Asansol. I celebrate Ram Navami, Kali Puja, Chhat Puja, so I have always held on to my values even then.

Tell me, what is wrong with saying Jai Shri Ram? My dadaji (grandfather), my parents.. we have always said Jai Shri Ram as a salutation. It is only after the Supreme Court order that the temple is being built. Usko aap kaise thukra sakte hain? How can you ignore that?

The BJP follows the rituals of Hinduism. Is that wrong? The party never dictates terms to other religions. The Muslims in our party keep roza, offer namaaz... I don't see any ideological problem at all.

How has your interaction been with Mamata Banerjee?

Dalmiya: When I complained that I am not allowed to work in Bally, I think she tried to speak to the zilla parishad and block development authorities. But they do not listen to anybody, not even her.

She has tried to help me whenever she could. In the first week of January, when I said I was upset about termites in the party, she had she would take care of my constituency. But you see, even her own people don't listen to her.

I am a very loyal person in my personal and professional interactions. People cannot say that I have cheated them by running away from the party. I did try my best.

The party expelled me because I demanded honesty from the party. And I think that's a blessing in disguise.

Tiwari: I still respect Mamata Banerjee a lot. But I live in Bengal, I am a politician, I have responsibilities towards Asansol.

The BJP government is at the Centre in Delhi. You want to remove the BJP government, that's fine, but just because Narendra Modi represents the party, you will stop the central schemes for Bengal. What kind of politics is that?

Both Mamata Banerjee and the party have changed. I agree with Dinesh Trivedi that the party has become like a machine. The party I had joined had maya and mamata (empathy and sympathy towards people).

Mamata is an emotional person, she follows her heart. But alas, she too has become a machine.

We loved that Didi, we still love her, but she is a changed person. Why and how the change happened, who is responsible, I can't say.

Just as the TMC calls out the BJP for being authoritarian, they too have returned the compliment. What is your experience? Is there democracy in the party?

Dalmiya: (Laughs) None at all. Initially, when I raised some issues, people thought it was my personal problem because I don't come from a political background and therefore I may be facing problems. But hard core politicians are saying the same thing -- MLAs, ministers, MPs.

The moment you speak out, you have to leave the party. They say it's for the betterment of the party, but they ensure you remain a slave of the party.

Keep your head down and do your work. Don't argue, don't criticise, don't take decisions.

Sorry, that's not the kind of politician I am.

Tiwari: The party believes it is democratic. But the definition of democracy changes according to the will of the party and the leadership. The real and true meaning of democracy does not exist in the party.

If you criticise the party you will be expelled.

Dalmiya; Not a single paisa of the fund has reached people in my constituency. It's big zero.

Tiwari: Yes, it's an allegation made by the BJP. The TMC doesn't agree, obviously, but when the Comptroller and Auditor General stepped in to probe the issue, the party went to court.

Swagat kijiye, aaiye bhai, jaanch kijiye, welcome their probe, so that the veil of suspicion is lifted from the minds of our people.

Your take on Mamata Banerjee's 'insider outsider' line of defence. Interestingly, your name, Baishali, is pronounced the Bengali way.

Dalmiya: Yes, that's how Bengalis pronounce Vaishali. And that's because my mother is a Bengali. We have been holding Durga Puja in our home for 300 years. Why should I feed into something as absurd as this?

Those who are talking about outsiders should themselves be booted out of the state. These people want to divide the country. The BJP believes in strengthening the country, not weakening it. 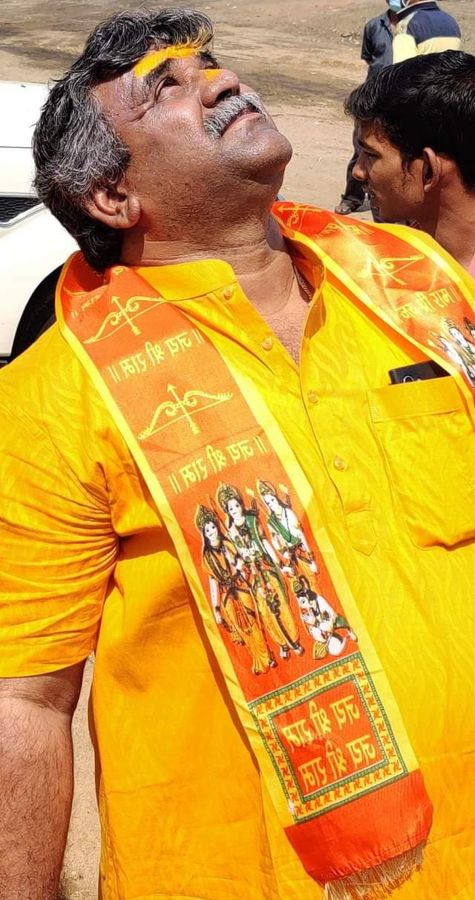 Tiwari: This argument will only divide society and it is being used for political gains. It will never work because its fundamentally wrong. You are sowing seeds of discontentment at the grassroots.

It's my humble advice that the party not think in these lines because once this discontentment and disunity is sown, you will never be able to weed it out and this state will only become weaker.

What responsibilities has your new party handed out to you?

Dalmiya: I am still the the MLA from Bally because I was expelled from the TMC.

Had I resigned, like Suvendu-da (Adhikari) or Raj-da (Rajib Banerjee, former West Bengal forest minister) I would have to vacate my seat.

I have asked the BJP to give me a ticket from Bally because I know my constituency and have made promises I intend to keep.

When the PM had come to Howrah, (February 22) I went to the airport to receive him. We are given specific duties and that was what I was told to do.

This is a regimented, well-organised party. Every week I get a list of places I have to visit, programmes I have to attend, or rallies I have to participate in. We have to go all over West Bengal and promote the party and its programmes.

Tiwari: I have just joined the party. I will naturally do whatever I am told to do.

Dalmiya: Prashant Kishor doesn't take care of the scenario in Bengal personally. He has a group of young students, 22-23 year olds, who go to MLAs and frame their programmes, tell them what to do.

They are not even 25 years old which is the cutoff for qualifying for MLA elections and they think they can crack the whip at us!

They do not know anything, they haven't seen the world, but they think they can dictate how we should work our constituency.

Prashant Kishor is only selling himself with his marketing gimmicks and none are successful.

Programmes like Didi-ke bolo (tell Didi), for instance, arre, didike uttar dite hobe toh! Didi has to answer! The programme allows citizens to record their grievances, but it's like talking to a wall. It's frustrating for citizens because there is nobody at the other end of the line.

And the other programme -- Banglar Gorbo Mamata (Bengal's pride, Mamata). How can you call yourself the gorbo, pride? That's for people to decide.

Whatever programmes he has launched are super flops.

Tiwari: I don't want to comment. Prashant Kishor is respected in his field of work. 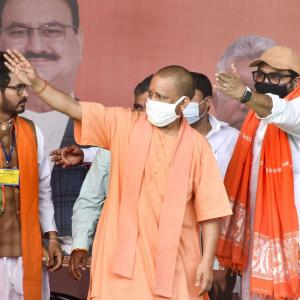