'Genuine mistakes can and must be forgiven,' argues Vivek Gumaste, US-based academic and political commentator. 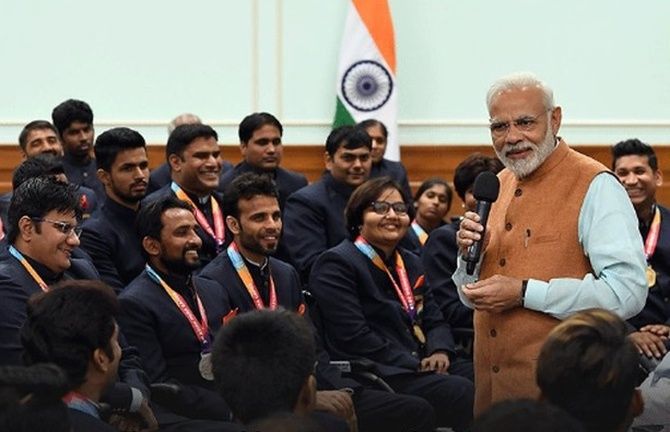 The Bharatiya Janata Party's decisive electoral defeat in its bastion, the Hindi heartland, has come as a boon and a life-saver for a near terminal Opposition and injected a much-needed bolus of adrenaline into its adversaries, both political and ideological.

However, in their haste to capitalise on the moment and exploit the BJP's discomfiture to the hilt, Prime Minister Narendra Damodardas Modi's detractors are embarking on a dangerous and dubious path of vile disinformation and reckless populism that does not augur well for the country.

The shrill, high decibel campaign emanating from these disparate entities reeks of negativism and skullduggery; a blatant attempt at obfuscation that takes recourse to hyped up incidents of intolerance, exaggerated projections of gloom and doom and outright falsehoods to create an overall impression of despondency.

This 'Remove Modi' crusade needs to be countered and called out for what it is, so that the nation gets a legitimate perspective prior to May 2019.

That there is some disenchantment with the BJP at the ground level is undeniable. But this public resentment warrants intelligent scrutiny.

Is it an absolute indictment of the Modi government for non-performance vis a-vis other previous governments?

Or is it a relative disapproval stemming from the gap between expectations and fulfillment?

And is it to some degree influenced by an orchestrated propaganda of falsity?

The emergence of the BJP government in 2014 ushered in a new era of hope and progress; almost a revolution of sorts that hoped to carve out a new India and lift the sagging morale of a nation direly in need of aggressive and purposeful reinvention.

This, the Modi government has done effectively through a series of innovative initiatives.

The outlandish claim that this government is merely enamoured with symbolic and high-profile ventures divorced from the needs of the common man is a myth. In fact, the government is focused on alleviating the day to day hardships faced by the common man by providing toilets, bank accounts, affordable housing, LPG gas connections for cooking, and health insurance.

The single most important programme that will define this government is its Swachh Bharat Abhiyan -- a bold, daring initiative that previous governments had considered too paltry to address. Thousands of new toilets have been built and open defecation is on the retreat.

Sceptics may quibble about the exact number of new toilets built but the progress in this area in the last four years surpasses everything we have done since Independence. WHO stated that at least 180,000 diarrheal deaths were averted in rural India by this programme, pointing to its tangible benefits.

While there is still much work to be done, this programme has brought about a sea change in the mindset of Indians towards cleanliness -- a vital change for social and medical advancement.

There are other plausible success stories -- all geared towards making the life of the common man better. To name a few:

This is not to say that this government has not made any missteps especially in the financial sector. Demonetisation was a well-intentioned idea that went awry. There must be acknowledgement of that with a gentle reminder to the public that it was done with the noblest of intentions.

Likewise, the public must be made to realise that GST was a necessity and inevitable; it is here to stay, a done deed that no successive government will rescind. That this government has been making periodic modifications in the GST to make it more acceptable needs to be appreciated by the public.

Instead of debating relevant matters, Modi's detractors and their acolytes are indulging in a jamboree of non-issues. The notion that intolerance is on the rise is an illusion based on isolated incidents -- distorted and blown out of proportion. The cow slaughter imbroglio heads this litany of lies.

Veteran columnist Tavleen Singh declared in July 2017 in Indian Express: 'Violence is the mood of the new India and the armed men who wander our highways in search of Muslims to kill are today's heroes.'

Do a few isolated incidents (yes, they are isolated when viewed against the vast expanse of India) occurring in a few remote towns in a country of 1.3 billion spread out over 7,935 urban units (cities and towns) and 640,867 villages define 'the mood' of an entire nation?

This statement is classic example of unadulterated hyperbole, rumour-mongering and senseless alarmism that does more harm to minorities by creating an environment of exaggerated fear.

The massive mandate given to Modi was tagged with unrealistic sky-high expectations -- a complete realisation of the goals was almost impossible and disappointment was inevitable.

Public pique needs to be assuaged, but the voter must be made to realise that the Modi government, even with its deficiencies, is far better than Manmohan Singh's scam ridden 10-year tenure.

The biggest selling point of this regime is its incorruptibility. Arguably, this is the only government in India's history to complete its tenure without even the whiff of a scam.

Only an honest, incorruptible and sincere government has the best chance of delivering tangible progress to the Indian people.

Genuine mistakes can and must be forgiven, unlike malicious scams.