News
Business
Movies
Sports
Cricket
Get Ahead
Money Tips
Shopping
Sign in  |  Create a Rediffmail account
Rediff.com  » News » What happens if the BJP wins only 210 seats in 2019...

'It will be fascinating to see how Modi, for the first time in his political life without a majority, is able to manage the ambitions and the conflicts,' says Aakar Patel. 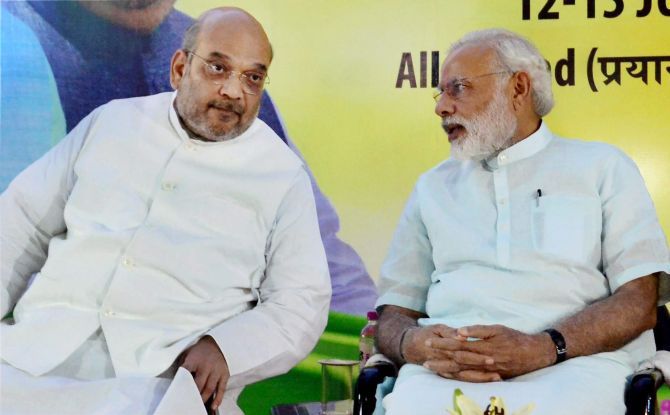 The defeat of the Bharatiya Janata Party in the recent by-elections across India has produced speculation about what 2019 will bring.

We have looked at the issue state by state before and I don't want to repeat that exercise. The one thing that seems reasonable to assume is that if large parts of the Opposition remain together, it will be difficult for the BJP to hold on to too many more than 210 seats in the Lok Sabha.

This would make the BJP the size of the Congress in the last United Progressive Alliance government.

I don't think it is possible, at least as things stand at the moment, to see the BJP giving up the position of single largest party.

It will hold on to that position and it will give the party leadership the options of looking to build some sort of new National Democratic Alliance.

Regional parties that are not currently in it, but have been at one time, like some of the Tamilian parties, may join in.

Others, which were once there but have become opponents, could join again or remain neutral.

Chandrababu Naidu's Telugu Desam and Naveen Patnaik's Biju Janata Dal are two such, and there are others also.

Even if it drops 70 or 80 seats, therefore, it should still be possible and perhaps easy for the BJP to return to power.

What will be interesting is two things. First, how the party internally responds to the loss of seats and loss of majority and secondly how its leadership manages allies who have a veto.

The first will be an entirely new situation for Narendra D Modi. Readers will remember that he became chief minister of Gujarat without having fought a single election. He has always led a majority.

The leadership of the RSS and BJP felt that the divisions produced by factionalism in the Gujarat BJP needed to be fixed and Modi was parachuted in.

A few months into his term, Gujarat burst into flame. Modi then delivered consecutive victories for his government and his only experience as a chief minister is in heading governments where he controlled a full majority and often a two-thirds one.

He used the authority he earned with his victories to totally dominate the Gujarat BJP. Old leaders and builders of the party like Keshubhai Patel and the undefeated six term Lok Sabha member Kashiram Rana were sidelined.

New faces, all loyal to Modi, were brought in. Modi picked and chose his cabinet and dominated it also, holding all the key portfolios.

Amit A Shah is seen as the second most powerful leader in the country today, and he is, but it is instructive to remember that in the decade that he served Modi in Gujarat, Modi did not give him cabinet rank, keeping him as minister of state.

Modi's total domination meant that others in the party had no options. Those he sidelined had no agency to push back because of his victories.

There were rumours that the RSS was unhappy with his concentration of power but nothing came of it. In fact, he even fixed some of the RSS leaders in Gujarat.

Modi's brilliant campaign of 2014 then produced a similar situation in Delhi and he was the undisputed leader of a party that had previously had some divisions but was always more disciplined than the Congress.

Old leaders like L K Advani and Murli Manohar Joshi were shunted out. Others like Sushma Swaraj had to submit.

The party is seen as one big happy family today, but it is not.

Like all parties it has many who see themselves as being capable of doing more, but are being deliberately held back.

In a situation where the BJP has only 210 seats, these individuals will assert themselves in a way that they are not doing now. These include regional leaders like chief ministers, national ones and small factions who will come together as a lobby group.

It will be fascinating to see how Modi, for the first time in his political life without a majority, is able to manage the ambitions and the conflicts.

The other thing will be managing the allies.

At 210 seats the position of the prime minister will be like that of Manmohan Singh.

The UPA leader was wrongly seen as weak, and this weakness was seen somehow as a personal failing rather than the position of a man whose allies have a veto on his actions.

There is no defence against such allies except for martyrdom.

One can sacrifice the government, or one's position, and move on.

But if one wants to lead in a government where the majority is missing, then allies will have to be accommodated.

This is again something that Modi has never been required to do.

Running a minority government requires flexibility and the ability to swallow humiliation.

Allies will make sure that their hold is made public and this will mean getting the government to bend a few times.

It will be fascinating to see how Modi manages this, particularly for those of us who have observed the meteoric trajectory of his career.

I have written before that having minority governments and khichdi coalitions has not hampered India's economic and social growth.

Those who fear a minority government or a hamstrung BJP should not despair. Coalitions are not evil.

What will be instructive will be to see how Modi manages one. 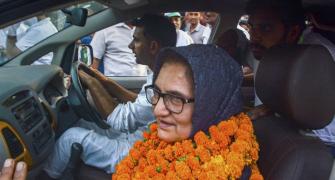