News
Business
Movies
Sports
Cricket
Get Ahead
Money Tips
Shopping
Sign in  |  Create a Rediffmail account
Rediff.com  » News » Why did a US senator warn Modi against Putin?

'Washington senses that the anchor sheet of India's strategic autonomy lies in its longstanding partnership with Russia, which remains firm and immutable despite the changes in world politics in the post-Cold War era,' notes Ambassador M K Bhadrakumar. The Nikkei Asian Review, well-known for its anti-China reportage, featured an article in the weekend titled India should ignore Putin's offer to broker accord with China (external link).

The author is none other than Marco Rubio, the high-flying Republican senator from Florida and the acting chairman of the US Senate Intelligence Committee, co-chair of the Congressional executive commission on China and a ranking member of the Senate committee on foreign relations.

Rubio is one of President Trump's closest supporters (external link) today, apart from being an old ally of Secretary of State Mike Pompeo, dating back to their days in Congress.

Pompeo had endorsed Rubio against Trump during his run for president in 2016. Pompeo wrote (external link) at that time, 'When I think of the challenges facing our nation -- whether it's our broken healthcare system, runaway government spending, or job creation domestically, or threats from terror groups like ISIS, al-Qaeda, or the terror regime in Iran internationally -- there is simply no candidate better to tackle them than Marco Rubio.'

The Rubio piece is dripping with Russophobia and reminds one of Pompeo's trademark style. The leitmotif is Russian President Vladimir Putin, whom Rubio demonises as someone who singularly aims 'to shatter the current US-led international system' with tools he perfected in Russian domestic politics -- 'supporting thugs, undermining democracy, and stealing everything that isn't nailed to the wall.'

'Across the globe in the Himalayas, relations between India and China have remained tense since May following a clash of troops near the countries' disputed border in Ladakh.'

'The violent clashes, as well as domestic moves such as India's decision to ban over a hundred Chinese electronic apps, has stoked fears of further escalatory action between the two nuclear-armed nations. Sensing an opportunity to prove itself as an important global power, Moscow has attempted to act as a mediator in the conflict.'

'But even a cursory look at Moscow's motivations makes clear that Putin's interests are that of his own.'

'Russia considers China to be its most important strategic partner. Having antagonised many nations to its west and finding itself diplomatically isolated as a result, Moscow has in recent years looked to a fellow authoritarian regime in Beijing to develop a rapport. This relationship has continued in the form of enhanced cooperation in digital infrastructure, military exercises, as well as growing trade relations.'

'But Moscow is also amid a major effort to cultivate relations with New Delhi, as well. India is crucial for economic and geopolitical reasons, its government is a longtime purchaser of Russian military equipment.'

'But India is a vibrant democracy and is moving decisively toward other liberal democracies to confront authoritarian states. Putin shouldn't count on helicopter purchases to maintain friendly relations with India as he blatantly cozies up to China.'

Succinctly put, Rubio warns Prime Minister Modi to be wary of Putin and Russia, which is a friend of China, who is India's enemy.

It is a familiar theme lately that American think-tankers have been plugging, ably supported by US lobbyists in India.

Rubio must be standing in for Pompeo. The article alludes to India's helicopter deal with Russia, which apparently annoys Washington.

Reports say that India and Russia (external link) have agreed to resolve issues around the production of Ka-226T helicopters and fast track it. This was discussed during Defence Minister Rajnath Singh's visit to Moscow in June.

The project is on 'Make in India' mode. India will be able to receive some crucial helicopter technologies from Russia as well.

This is known to be a project that Putin personally promoted (external link) with Modi.

Rubio appears to sound a warning to Modi who is known to enjoy close personal rapport with Putin.

'Much like Putin's foreign adventurism,'Rubio writes, 'the goal has simply been to enrich himself and his inner circle. Those considering relying on the Kremlin should realise that they will have no long-term stable partner in Russia while he remains in power.'

Without doubt, this is Pompeo speaking even as New Delhi and Moscow are discussing high-level visits in the near future.

Rubio's article appears even as India is opting for deployment of the indigenous Light Combat Helicopters made by HAL Bengaluru, in Ladakh on the Chinese border, in preference to the new US-made AH-64E Apache (external link).

Compared to the LCH, the Apache is faster, has more engine power, and carries far more weapons, but LCH has a longer range.

The Indian experts evaluate that the LCH has an edge over Apache due to its ability to perform at high altitudes in the upper reaches of the Himalayas.

The Trump administration has been hoping for some big helicopter deals (external link) and has been pulling strings in Delhi but to its dismay finds that Russia has stolen a march. The rancour shows in Rubio's venomous attack on Putin.

From the geopolitical perspective, Rubio finds it unacceptable that a 'Quad' member country -- 'India is a vibrant democracy and is moving decisively toward other liberal democracies to confront authoritarian States' -- should be having a dalliance with Russia at all.

Of course, there is a body of opinion in India too that an alliance with the US is what the country should prioritise in the backdrop of its face-off with China in Ladakh. They blithely assume that the US is raring to go to wage a joint war against China.

Rubio's piece should be an eyeopener for such people besotted with the superpower as to what in reality an alliance with the US entails -- a demanding partnership that locks in India.

Rubio wrote in anticipation of likely initiatives by Putin to ease India-China tensions.Putin is expected to visit India in October. And a spate of summit meetings can also be expected in the coming months under the rubric of BRICS, SCO, G20 that would bring together the Russian, Indian and Chinese leaderships (external link).

The US is panicking that India might bolt away just as a window of opportunity opened to tether it to the Quad stable (thanks to the stand-off in Ladakh), which has been a key objective of the US regional strategies against China in the Asia-Pacific.

Rubio's vituperative attack on Putin highlights the depth of anxiety in the American mind that the Kremlin leader may breathe fresh life into the Russia-India-China triangle.

Indeed, it is in Russia's self-interests to tamp down Sino-Indian tensions. But what unnerves Washington most is that any easing of India-China tensions will knock the bottom out of its containment strategy against Beijing.

With a likely transition in the Japanese leadership (external link) and taking into account China's close ties with ASEAN countries as well as the European allies' disinterest in joining the US bandwagon against China, Washington is practically being left with a solitary ally in the Asia-Pacific -- Australia.

Facing such stark isolation, the stakes have never been so high for the US to shackle India to its regional strategy in the Asia-Pacific.

Washington senses that the anchor sheet of India's strategic autonomy lies in its longstanding partnership with Russia, which remains firm and immutable despite the changes in world politics in the post-Cold War era.

The partnership has gained in verve and swagger given the high importance Modi personally attaches to it.

Hence, this assault on the Russian-Indian strategic understanding. Thus, a huge propaganda campaign (external link) is under way portraying Russia as an ally of China whom India can longer trust.

Rubio has lent his name to dignify the US propaganda and draw the attention of Indian policymakers. 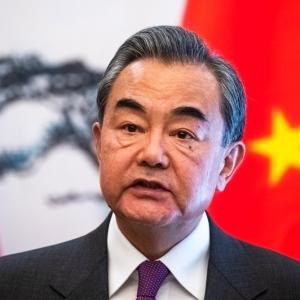