'If Trump is out, Modi is going to find himself in a hotspot, having to reset his relations with the new US President with whom he will have to co-exist for well-nigh his full term' says B S Raghavan, the distinguished civil servant. 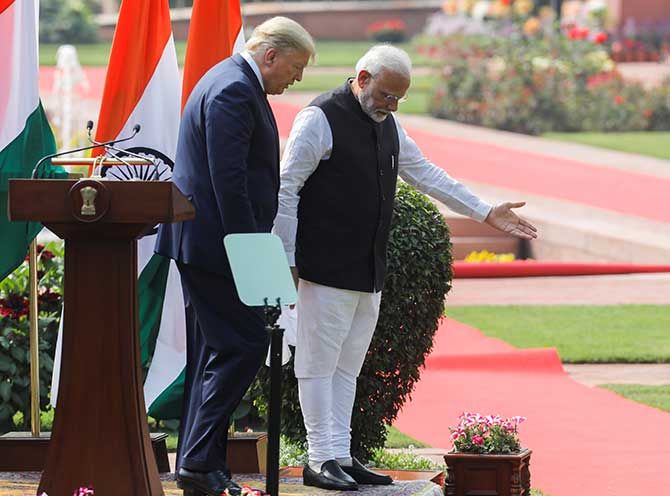 Americans and Bengalis share one common trait: They are both, by temperament, against anyone in authority.

Conformity goes against their grain.

On the contrary, they love mavericks.

You can't rule the Americans (and the Bengalis) by fiats or diktats; you can only rule them by winning them over by gentle and patient persuasion.

That explains their utter and even unruly disregard of the do's and don'ts pertaining to COVID-19.

While the whole world is terrorised by its prevalence, Americans, in their half-trousers, are going about making merry and turning America into a cauldron of catastrophes.

And Americans are instinctively against any incumbent President.

For every ill, the average American pins the blame on the President.

There's the story of an American guy who went to the races and bet on a horse.

There was not a scintilla of doubt in his mind that he had won the jackpot and would return home a millionaire.

To his ugly surprise, his horse came 22nd in the race and he lost his money. 'Damn that President!' he shouted.

President Donald Trump probably thought that he would neutralise this tendency by being the Ultimate American himself: Defying all codes of behaviour, all modes of governance, all norms of conduct, all rules and regulations, blurting out whatever comes uppermost to his mind without paying any regard to its consequences, tweeting his way to running an egotistic, free-wheeling, tit-for-tat, tumultuous presidency.

It speaks volumes for the resilience and vitality of America that it has withstood all the mighty shakings it has undergone under Trump and continued to maintain its vibrancy.

Of course, he still enjoys the support of a constituency of his own, and he nurses it by his maddening antics.

There were even some among 'normal' Americans who thought that political correctness, contrived adherence to niceties, artificial politeness -- in short, wholesale practice of unbridled hypocrisy -- had gone too far and it was high time that someone smashed that mould to smithereens.

They were elated that Trump was making such a thoroughly good job of it.

In fact, until some time ago, he was widely believed to be heading for a second term. 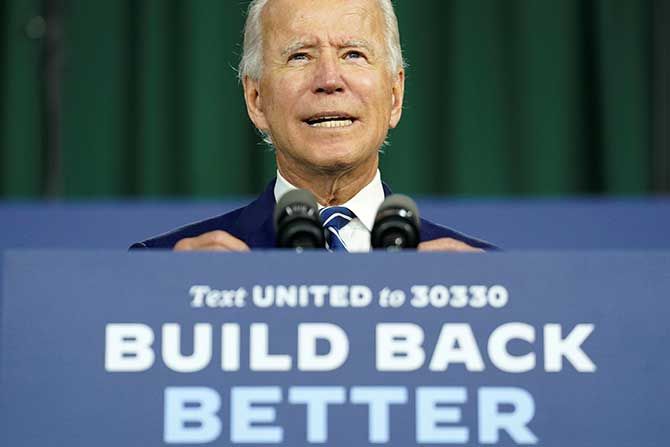 Of late, he has palled and even these outlier types of Americans have had too much of him.

The one institution -- Fox News -- which represented these groups and unwaveringly stood for him seems to have turned against him, and he against it, to the extent of declaring to everyone's stunned surprise that he was no fan of it and that it also peddled fake news.

His own niece has written an unflattering book on him.

His poll ratings are going downward by the day.

As an aficionado of America and the Americans, my take is that Trump will be bundled out, come November.

His exit will be his greatest gift to his country.

So, the Trump era will soon be a thing of the past.

One great outcome of that era is that anyone who follows him, and whatever his policy, would look just great.

His successor can just sit tight with hands folded; he would come out on top.

Joe Biden is all set to shine by contrast whatever he does or doesn't do.

By the time he takes over, with all the furious effort going on in the field of medical research, COVID-19 too might find its nemesis in some antidote, ridding both America and the world of a scourge.

Or, who knows? As Trump has prophetically proclaimed in his interview to Fox News on July 19, 'It is going to disappear. I'll say it again, it's going to disappear, and I'll be right......Because I've been right probably more than anybody else.' 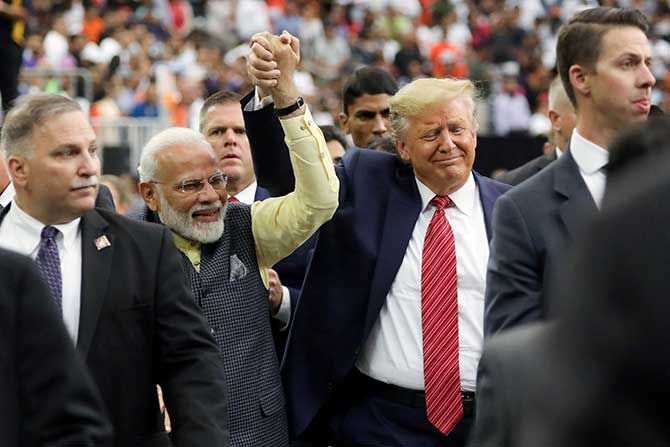 Thus, as far as America is concerned, it will be business back to the usual and Joe Biden will be hailed as a redeemer and saviour.

It is only Narendra Damodardas Modi I am worried about.

He has staked all his hugs on Trump.

In the spectacular Howdy Modi show in Houston, Modi threw all caution to the winds and wished for and predicted a second term for Trump.

It is not that America and India are getting close because of congruence of policies.

It is almost solely because of Modi putting all his bets on Trump's triumphant return to power.

If, by some miracle, that were to happen, Modi will be on cloud nine.

But if, as it now looks, Trump is out, Modi is going to find himself in a hotspot, having to reset his relations with the new US President with whom he will have to co-exist for well-nigh his full term.

What countries and their leaders dealing with the US should never forget, but do, is that for Americans and for the American establishment, there is nothing like sentiment or attachment, such as, for instance what the Soviet Union showed towards India in Indira Gandhi's time or presently China is showing towards Pakistan, supporting it through thick and thin.

The deciding motivation for the US always is in the answer to the question: 'What's there in it for me?' One moment it will all be all effusive, and profuse in plaudits, and the next moment, if it suits its interest, the CIA will be unleashed to deploy all its dirty tricks to do you down.

Even Trump, for all his love-talk and hugs for Modi was blowing hot and cold on various issues of importance to India.

An additional problem for India is that the families of most in its academic, political and governing establishments feel bound to the US for educational opportunities, livelihoods and other counts, and so, are unable to snap their emotional links and take a dispassionate approach to India-US relations.

One can only hope that overcoming all these odds, Modi has set afoot discreet moves to establish contacts with Joe Biden and his team of close advisers and brief them on, and enlist their support to, India's interests and concerns.

B S Raghavan, a former member of the Indian Administrative Service, was also the Policy Adviser to UN(FAO), a US Congressional Fellow and Chancellor of Jharkhand ICFAI University. 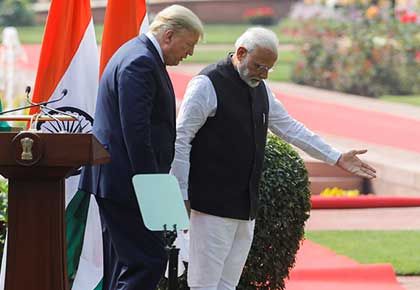 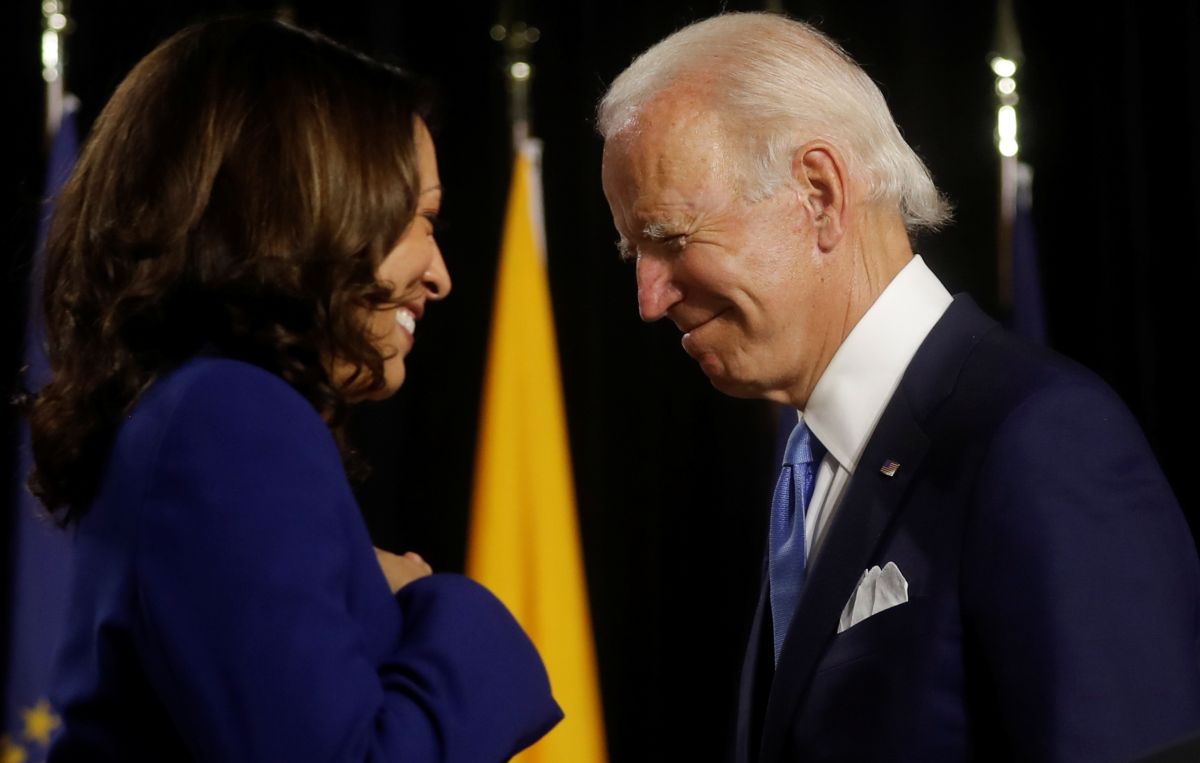