News
Business
Movies
Sports
Cricket
Get Ahead
Money Tips
Shopping
Sign in  |  Create a Rediffmail account
Rediff.com  » News » What Modi needs to do

'The time has come to ask the extent of coercive power the State must arrogate to itself to achieve economic ends,' points out T C A Srinivasa Raghavan.
Illustration: Dominic Xavier/Rediff.com 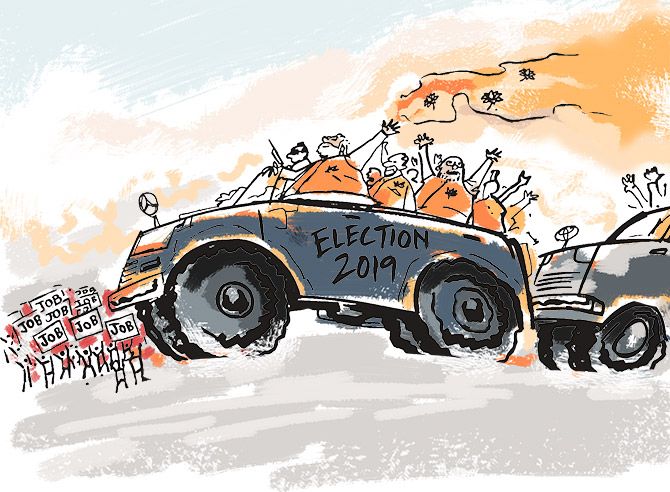 The new government will have to deal with three very basic questions because by the time its term ends, a quarter of the 21st century will already have gone by.

The first is what the nature and shape of the Indian State will be in the 21st century.

How much more coercive will it be -- or have to be to survive as a viable entity?

The second is about the nature and form of the Indian economy.

How free will it be of the state? As we shall see, this is closely related to the first question.

The third question is about the overall political arrangement.

But a mere readjustment of the political parties will not help the country.

The economy will also have to grow really strong.

Recently a Harvard-trained Indian economist asked why, despite the complete absence of democracy, China has done well economically while India, with its all its democratic credentials, has done so poorly.

He attributed the difference to the strong Chinese State and the weak Indian State.

Since then we have fatalistically taken it for granted.

But the time has come to ask the extent of coercive power the State must arrogate to itself to achieve economic ends.

Clearly, what it has is insufficient.

If anything, the State's coercive powers have been hugely reduced, as a result of which all factors of production are either very costly or unavailable or both.

To make them cheaper we need to debate if the State has to become more coercive as in other countries, including those of the Western hemisphere.

Given the structural, Constitutional and political opposition to this, striking a balance is going to be a very tough challenge.

One way of doing it would be to allow far greater autonomy to the states by deleting the concurrent list of the Constitution and moving many of the items from the Central List to the States List.

The states should then pay a fixed amount, revisable upwards every five years to the Centre.

This will not be easy, but, then, the 21st century has only just begun.

The next decade should be spent addressing these very basic problems.

Reforming the State, as so many other countries have found, is the hardest thing to do because the principle of independence means that only those who need to reform the most can reform themselves.

This is the old turf problem between Parliament, Executive and Judiciary.

To abridge this self-defeating interpretation of independence, the other two must reform the third.

Without this, no reform will be possible.

That is why the new government should figure out a way by which any two of the three can propose reforms for the third.

These must be made binding.

If this requires an amendment to the Constitution, that is what the next government should work towards.

After all it has been amended over a hundred times for far less.