Even the prime minister's bitterest critics will have to concede that over the last six years or so, he has achieved what was once considered impossible: He has weaponised Hinduism as an election-winner.

Till Mr Modi won his landslides, politicians had always believed that while minorities may vote on the basis of religious identity, most Hindus were too secure and too comfortable in a country where they constituted the overwhelming majority to allow their religion to influence their voting decisions.

Hindus did sometimes vote on the basis of caste, but even the Jana Sangh and the Bharatiya Janata Party believed that religion was not enough to sway the votes needed to win elections.

L K Advani's emphasis on such issues as Ayodhya may have laid the foundations for the BJP's rise.

But when it came to elections, it was the less radical, more 'secular' Atal Bihari Vajpayee who was made the face of the party in the hope of attracting voters beyond the Hindutva loyalists.

Mr Modi has changed all that.

It makes no attempt to get minority votes and does not bother too much with even the symbolism of minority candidates.

As its supporters brag, it has ended the veto power that Muslims were once believed to have held at national elections.

Even if all of the minorities vote against the BJP, it does not matter.

As long as Hindus, who constitute 80 per cent of the population, vote for it in large numbers, the BJP will still win elections.

The obvious benefit of all this for the BJP is that its electoral juggernaut is hard to stop.

But there is a downside. It has to periodically re-assure its Hindu constituency that it is implementing a pro-Hindu agenda.

This government's formula has been to let BJP-ruled states run amok in their pursuit of this nakedly pro-Hindu agenda while the Centre discreetly averts its gaze.

During the party's first term at the Centre it was such issues as the protection of the cow that occupied centre stage in the states.

Passions were raised to the level where innocent Muslims were lynched on mere suspicion of possessing beef and BJP spokesmen took to describing the Congress as an 'anti-cow party' as though this was a serious charge to level in the 21st Century. 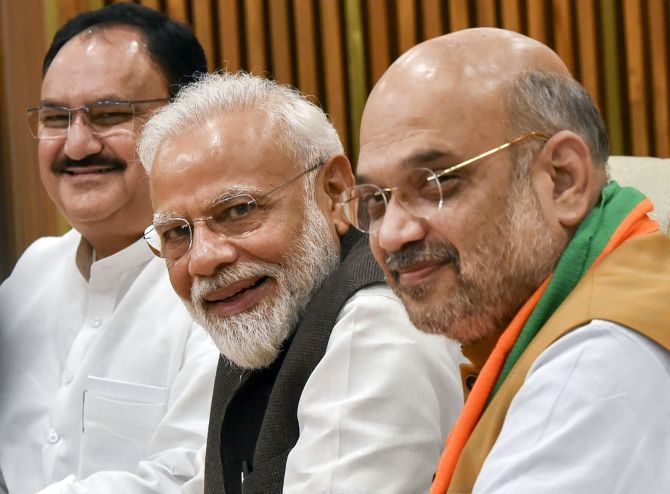 During Mr Modi's second term, the same formula has been followed.

Once upon a time, the concept of love-jihad was regarded as a delusion restricted to the lunatic fringe.

Now it is the subject of legislation in such states as UP and in Madhya Pradesh and Karnataka where Bills are being prepared.

Once again this leads to heightened passions and the targeting of minorities.

This approach has worked so well with the BJP's support base that the party's default position has become to term anyone from a minority who dares protest about its policies an anti-national or a traitor.

This was the approach favoured during the anti-CAA legislation where all protests were met with suggestions that they had been inspired from across the border: From Pakistan or even, Bangladesh.

The farmers camping on Delhi's borders have met with the same treatment.

They have been called separatists and Khalistanis (because many of them are Sikhs).

And when that hasn't worked, they have been called Maoists and terrorists. (I am waiting for a government spokesman to call them Turban Naxals.)

In the case of the farmers agitation, at least, diminishing returns have set in and BJP spokesmen are now offering clarifications. ('Only some of them are Khalistanis.' 'They are not Maoists but they are under the influence of Maoists', etc.)

But the government is still unwilling to take the farmers' objections to the new legislation seriously.

After all, the BJP has an overwhelming majority in Parliament so it has the support of the people, it asserts.

It was this sort of argument that was used to stifle the debate on the farm Bills and to short circuit the consultative process. 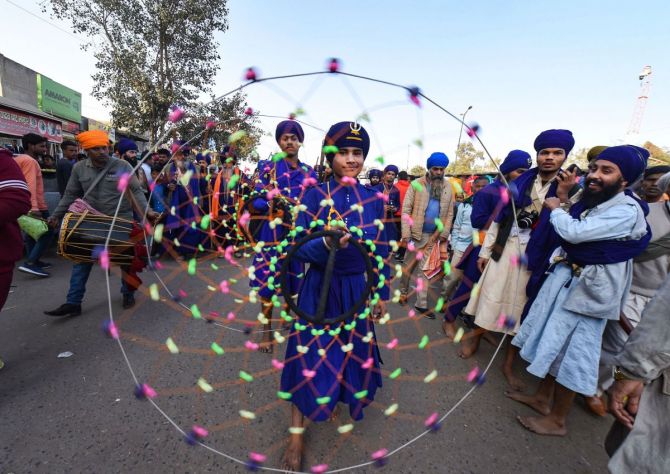 On one count, the government is right.

With its loyal Hindu constituency in place for it to count on, it need not worry about the votes it may lose during the CAA agitation or because of revulsion over love jihad.

As for the farmers, Punjab is one state where the Modi wave was turned away at the border.

So how does it matter if Punjab farmers are upset? They never voted for the BJP anyway.

The danger with this approach is that it reduces everything to electoral math.

In fact, there is much more to governance than winning elections.

All liberal democracies, even those with majority governments, are essentially coalitions.

You cannot run them on a purely majoritarian basis.

You have to find some way of giving those who did not vote for you (especially if most of your votes came from one community) a say in how things are run.

If you don't, then there are two consequences.

The first is that because Parliament is dominated by the brute majority of one party, it ceases to serve as a pressure valve for dissent.

Instead, those who do not agree with the government simply take to the streets or find other ways of protesting.

We saw that with the anti-CAA protests.

And we are seeing it now with the farmers' agitation.

The second consequence is more worrying.

At a time when Pakistan is trying so hard to revive the Khalistan movement, does it make sense for our government to call patriotic Sikhs Khalistanis?

At a time when global Islam is going through a radical phase, is it sensible to let Muslims feel that they have no place in India?

Weaponising Hinduism will win elections for the BJP.

But it will not help the party run a peaceful and equitable India. 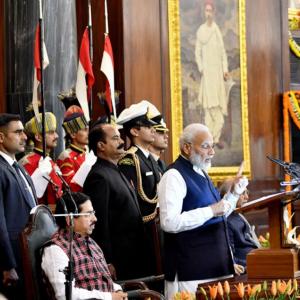