The Uttar Pradesh government on Tuesday approved a draft ordinance to curb forcible or "dishonest" religious conversions including those for the sake of marriage, which could land violators in jail for up to 10 years. Under the proposed law, a marriage will be declared "null and void" if the conversion of a woman is solely for that purpose.

Those wishing to change their religion after marriage need to apply to the district magistrate, according to the draft ordinance which would become law after its promulgation by the state Governor.

An official spokesperson said the state Cabinet gave its nod to the proposed law, roughly translated from Hindi as Uttar Pradesh Prohibition of Illegal Conversion Ordinance, 2020 -- at its meeting chaired by Chief Minister Yogi Adityanath.

In recent weeks, Bharatiya Janata Party-run states like Uttar Pradesh, Haryana and Madhya Pradesh have revealed plans to enact laws to counter alleged attempts to convert Hindu women to Islam in the guise of marriage, which party leaders often refer to as 'love jihad'.

"The way in which religious conversions are done using deceit, lies, force and dishonesty is heart wrenching, and it was necessary to have a law in this regard," Cabinet minister and UP government spokesperson Sidharth Nath Singh said.

Conversion for the alleged purpose of marriage is, however, one aspect of the draft ordinance.

The state government said the law aims to prohibit religious conversion done using dishonest means like false representation, through force, influence, torture, allurement or for the sake of marriage.

An official spokesperson said the onus to prove that conversion has not been done using such means will lie on the person carrying it out and the person who got converted.

In cases of mass religious conversion, the registration of the social organisations will be cancelled and strong action initiated against them.

Sidharth Nath Singh said punishment under the new law is a jail term from one to five years, and a fine of Rs 15,000.

But if the woman involved is a minor or belongs to a Scheduled Caste or a Scheduled Tribe, the jail term would range from three to 10 years, he said. The fine would increase to Rs 25,000.

"In the case of mass conversions, the punishment is from three years to 10 years and a fine of Rs 50,000 on the organisations which indulge in it," the minister told reporters.

Singh said if anyone wants to change their religion after marriage, they can do so. But the district magistrate has to be informed two months in advance on a prescribed form, and the person can convert once the permission is granted.

Addressing meetings for the by-polls in Jaunpur and Deoria last month, Chief Minister Adityanath had said his
government would come out with a law to tackle marriage-related conversions.

"We will bring an effective law. It is my warning to those who play with the honour and dignity of sisters and daughters by hiding their real names and identities. If they do not mend their ways, their ''Ram Naam Satya'' journey will start," he had said, referring to a funeral chant.

He had also referred then to an Allahabad high court ruling which had declared that conversion for the sole purpose of marriage is not valid.

However, in a more recent ruling, the high court has said that choosing a life partner 'irrespective of religion' is a matter of personal liberty.

"The commission is of the view that existing legal provisions are not enough to check religious conversion and on this serious matter, a new law is needed like in some other states," the report had said.

More recently, UP Law Minister Brijesh Pathak said, "There has been a rise in such cases in the state which have caused social disharmony and enmity. These incidents are also bringing a bad name to the state and therefore a strict law is the need of the hour." 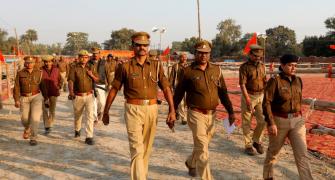 HC backs right to pick spouse regardless of faith