Europe and the problem of Islamic radicals

Europeans believe that what is under attack is their way of life, their secular faith, the long-fought right to keep religion out of the public sphere, observes Virendra Kapoor. Cold-blooded murders of French citizens in recent days by attackers shouting, 'Allahu Akbar' have yet again pushed growing concerns over militant Islam front and centre of the public discourse.

The world is rudely reminded of the ever present threat fanatics among sizable Muslim populations in Europe pose to peace and security.

Not without reason do Europeans believe that what is under attack is their way of life, their secular faith, the long-fought right to keep religion out of the public sphere.

Before the beheading of a woman and stabbing of two worshippers in a church in Nice in southern France last week, a Paris teacher was decapitated in a public street a few days earlier.

The Nice attacker was Tunisian, the Paris killer a Chechen.

Apparently, the killer felt enraged at the schoolteacher illustrating the French belief in the inalienable right to freedom of expression by showing the pupils cartoons of Prophet Mohammed.

These cartoons were first published by the satirical magazine, Charlie Hebdo, in 2012.

Three years later, Islamist extremists, angry at the depiction of Prophet Mohammed in the cartoons, massacred 12 journalists at Charlie Hebdo's office in Paris.

Undeterred by threats, the magazine republished the cartoons at the start of the trial of the accomplices of the Charlie Hebdo attackers last month.

In a series of jihadi attacks, 250 innocent people have been killed in the last five years.

The 2017 massacre was the most gruesome when a Islamic radical ploughed a tractor through a crowd, killing 80 innocent people.

In short, the French are beset by the very real threat of Islamist extremism.

Since the beheading of the school teacher, they have held nation-wide demonstrations reiterating faith in secularism.

Led by President Emmanuel Macron, they commemorated the schoolteacher's death at a funeral service.

Macron was clear: The schoolteacher was killed because 'he incarnated France,' embodied its value of freedom, liberty, secularism.

The French pesident reiterated that France will not change its way of life, nor succumb to Islamic radicals.

He vowed to weed out radicals among a majority of peace-loving Muslims in France. 'Islam was in crisis,' Macron declared.

The French secular faith bars the government from curbing the right to freedom of expression for the sake of a particular community.

The French had wrested the unfettered right to freedom of expression after a long struggle with the Catholic Church which for centuries had interfered in public affairs of the State.

Now, the separation of the State from the public sphere is sacrosanct.

This, then, was the background which caused Turkish President Recep Tayyip Erdogan to lash out at Macron.

Keen to burnish his new-found image as a defender of Islam, Erdogan called upon Muslims to boycott French products.

Erdogan claimed, wrongly, that the French had unleashed 'a lynch campaign similar to that against Jews in Europe before World War II.'

Pakistan Prime Minister Imran Khan, who had threatened to break the Saudis-led Organisation of Islamic Cooperation over the OIC's refusal to condemn India over Kashmir, lost no time in endorsing Erdogan.

Imran Khan had the Pakistan national assembly pass a resolution seeking the recall of the ambassador from France without knowing that Pakistan had no ambassador in Paris, the last one having been transferred to Beijing -- a replacement yet to be named. 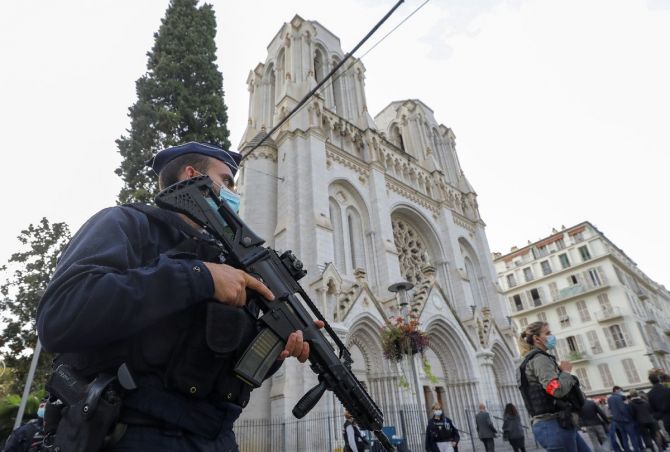 But Erdogan, facing domestic economic and political crises, sought to clothe himself in the colours of a new Ottoman empire.

Former Malaysian prime minister Mohamed Mahathir was no less provocative, calling on Muslims to go on a killing spree to avenge the death of their previous generations by the French and other imperial powers.

Notably, Imran Khan had threatened to float a parallel OIC with Turkey and Malaysia, and for his audacity was penalised by the Saudis who immediately recalled huge loans and otherwise cold-shouldered the Pakistani leaders.

Of course, both Erdogan and Imran Khan are hypocrites, shedding tears over the French drive against Islamic radicals while being blind to China's testified persecution and annihilation of their co-religionists in Xinjiang.

The million-plus Uighur Muslims are forced to renounce their religion, their women are forcibly sterilised and children snatched from parents and detained in camps far removed from Xinjiang.

Hundreds of mosques have been demolished in the province.

And in detention centres tens of thousands of Uighurs are made to shun their culture, language, religion et al.

The only two minority groups in China, the Uighurs in Xinjiang and the Buddhists in Tibet, are under intense pressure to abandon their faith.

But the brave defenders of Islam, Erdogan, Mahathir, Imran Khan are yet to utter a word edgeways in support of the persecuted Uighur Muslims.

Clearly, their faith in their professed religion is transactional, with China in a position to twist their arms should they call for an end to the persecution of Muslims.

The Chechen who beheaded the teacher was granted asylum by France, not Erdogan, on humanitarian grounds.

Western nations have accepted millions of Muslims from West Asia and North Africa.

Victims of violent conflicts and grinding poverty, they have found shelter in Europe while the petro-dollar rich Islamic nations have turned their back on them.

Indeed, neither Russia nor China is known to have absorbed a single `refugee' from the on-going wars in Syria, Yemen or other Islamic nations.

The percentage of Muslims in France is the highest in Europe.

The West alone is expected to shoulder the burden of migrants/ refugees on humanitarian grounds.

Often the problem is once they get asylum, it is the host nation which is expected to change its way of life, even to embrace the world view of the migrants.

The wide chasm between French secularism and Islamic radicalism may reflect a wider civilisational conflict.

The wheel of enlightenment and progress has moved slowly in the Islamic world.

But in the case of jihadis, it certainly is moving in the reverse direction, pushing them into the dark barbaric age. 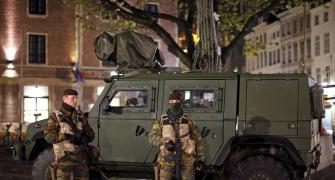