Europe will have to make some hard choices if it wishes to take on the militant group responsible for the horrible attacks in Paris, says Claude Smadja 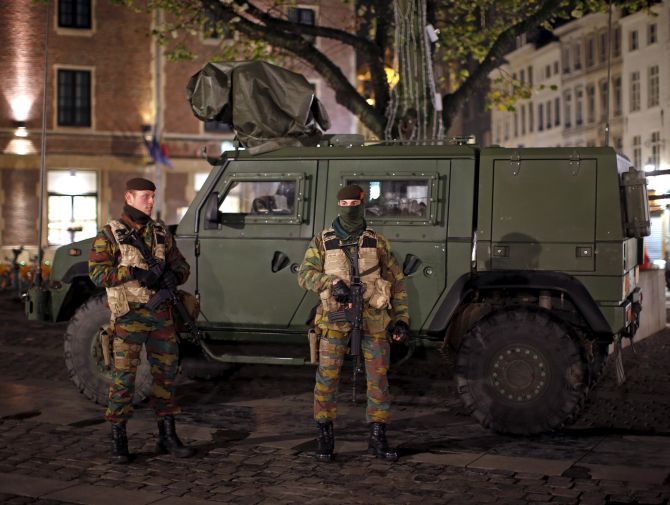 Paris remains a besieged city, Brussels was a ghost city for the whole weekend and New York and London are on edge. While police forces in different parts of Europe are breaking down doors, conducting searches and identity checks, French President Francois Hollande is frantically meeting other heads of state and government to create a fighting coalition against the Islamic State. It is sad that it has taken the horror of the recent attacks in Paris to wake Western governments from their complacency -- or from the illusion that they could conduct the sort of half-hearted fight against the Muslim jihadists of IS that spares them difficult choices and risky decisions.

We have now at long last entered the stage where everybody realises that the fight against Islamic Jihadism will be a long, protracted war. And it will be a dirty one in many different ways.

First, it is quite clear that, to be effective, the fight to be undertaken will mean infringing on some civil liberties and expanding the powers and margin of manoeuvre of security forces and the judiciary. Some of the rules and safeguards that had been established to protect the rights of normal citizens will have to be reviewed and amended when dealing with terrorists who have amply proven their utter disregard for the most basic tenets of human behaviour.

This will mean the ability of police and judges to keep people suspected of terrorist actions or links behind bars for interrogation beyond the usual limits set by current laws; the ability to conduct searches without warrant when conditions necessitate; the monitoring of, and intrusion into, digital communications; the closure of websites advocating practices and attitudes opposite to our values -- such as the subservience of women -- and the manu militari expulsion of imams preaching the use of violence in the name of Allah.

Of course, many human rights activists are already voicing their dismay and opposition to such infringements, and there will be hand-wringing and debate about these developments. But, the overarching priority has to be ensuring the security of the people in the face of the clear and present danger created by people who have no compunction in using extreme and blind violence and who benefit from many complicities among communities dissatisfied of their fate within French, Belgian, British or American societies.

There is no underestimating the serious potential threat represented today by the number of young Muslim people who have left their European country of origin to join the Islamic State, should they come back on the continent to pursue their fight against the “infidels”.

Second, it seems unavoidable that the fight against IS and Islamic Jihadism will also impact on European public perspective towards the continuing flow of asylum seekers and migrants from the Middle East, Africa and Afghanistan. Whatever the efforts of political leaders to dissociate the issues, it has not gone unnoticed that at least four terrorists had been able to get easily into Europe by just inserting themselves among the refugees who continue to cross European borders without almost any control. Coming at a time when there is a general realisation that Europe has to regain control of its borders, the necessities of the fight will unavoidably compel political leaders and security forces to tighten controls and become much more restrictive.

Populist and center-right parties all over Europe are now demanding greater scrutiny and a much more limiting policy towards refugees of any kind from the Middle East and the Muslim world in general. Their demands will be difficult to ignore in view of the present mood of European public opinion.

Third, it is now equally clear that the necessity of the fight requires unsavoury alliances and making some choices that are more in line with a realpolitik approach than with purely moral considerations. This has two major implications: First, the Americans and Europeans have now to come to terms with the fact that they are obliged to work with Vladimir Putin if they want to have any chance to be effective against IS.

President Hollande has now admitted this reality, recognising that there could not be two coalitions fighting IS. Whatever his antipathy for Putin and what he represents, US President Barack Obama will have to take his head out of the sand and recognise the failure of his previous policy. Thanks to his bold and risky move of involving his military in Syria, the Russian president has now become an inescapable player in the Middle East. And his planes are striking the forces opposing Bashar al-Assad as well as IS.

However, working and coordinating with Putin means that the Russian president can be convinced to direct more air strikes against IS forces and that US and European leaders accept that the fight against IS now takes precedence over their previous focus on ousting Assad from power in Damascus. As abhorrent as Assad may be, he is not preaching jihad and exhorting people to indulge in random bloodshed in European or US cities. As importantly, it means that Europeans and Americans have also to recognise that their previous position -- making the departure of the Syrian dictator a prerequisite for any solution in Syria -- has now become obsolete.

Assad is here to stay -- at least for a transition period following a hypothetical solution to the Syrian civil war. The most likely outcome -- if he were to leave the scene in the present situation -- would be a political vacuum and infighting among opposition groups that would allow IS to expand its footprint in Syria.

For all the present diplomatic agitation and the intensification of air strikes against IS, the key question remains whether it will be possible to eradicate IS without committing forces on the ground -- a step that neither the European, American or even Russian leaders seem ready to take.

In the absence of “boots on the ground”, the most realistic assumption is that a protracted campaign of air strikes targeting IS leaders, its troops, arm depots and the oil wells it controls, will not succeed in eliminating the threat represented by the IS and will, at best, reduce its nuisance capability. At some stage the Western world -- but also the Gulf monarchies -- will have to decide if they can afford to live with this prospect.

-- Claude Smadja is president of Smadja & Smadja, a strategic advisory firm. You can contact him on Twitter at @ClaudeSmadja.