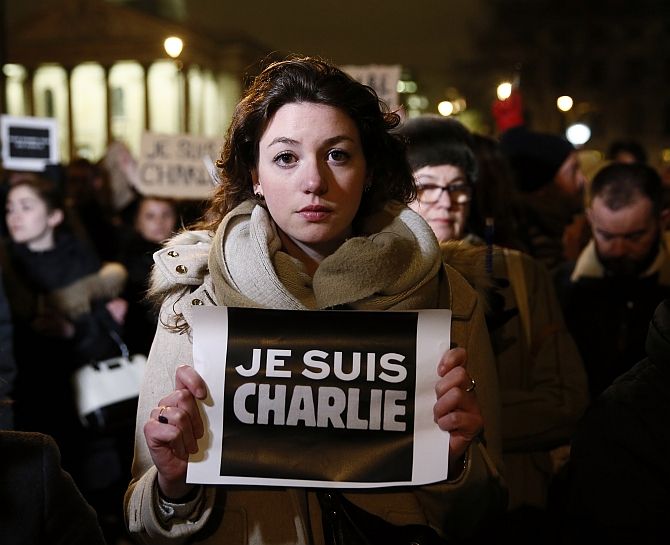 A woman holds a placard that reads, "I am Charlie", during a vigil to pay tribute to the victims of a shooting by gunmen at the offices of weekly satirical magazine Charlie Hebdo in Paris. Photograph: Stefan Wermuth/Reuters

France is mourning the deadliest attack in the country in over four decades in which 12 people were shot dead by heavily-armed gunmen shouting Islamist slogans at the office of Charlie Hebdo, a controversial satirical magazine, in Paris.

Media reports said that France had declared Thursday a national day of mourning, raised its terror threat level and stepped up security for media organizations, large stores and places of worship, and launched a manhunt for the killers with the assistance of the FBI.

Among the 12 killed were 10 journalists, including the magazine's director Stephane Charbonnier (also known as Charb), and two policemen. 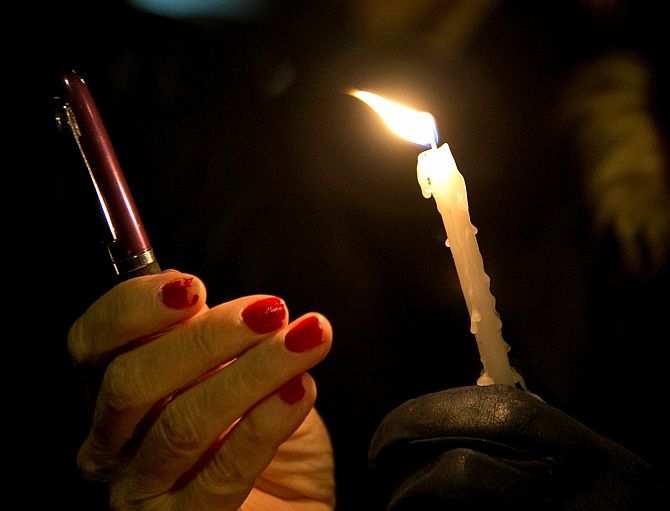 A woman holds a candle and a pen, symbol of liberty of press, as crowds gather at 'Place de la Republique' for a vigil. Photograph: Marc Piasecki/Getty Images

According to reports, witnesses to the attack say it involved two well-prepared gunmen who began shooting in the entryway, then systematically penetrated the magazine's offices, attacking the weekly editorial meeting that was in progress. Some staffers were able to seek refuge on the roof while the killings continued below. A woman cries during a vigil to pay tribute to the victims. Photograph: Stefan Wermuth/Reuters

The French government is now suggesting that three individuals may have been involved in the attack. A massive police operation is underway, with more than a thousand officers hunting the attackers, who abandoned their car in the northeast of Paris.

Thousands of Parisians gathered at the Place de la Republique in central Paris for a demonstration. 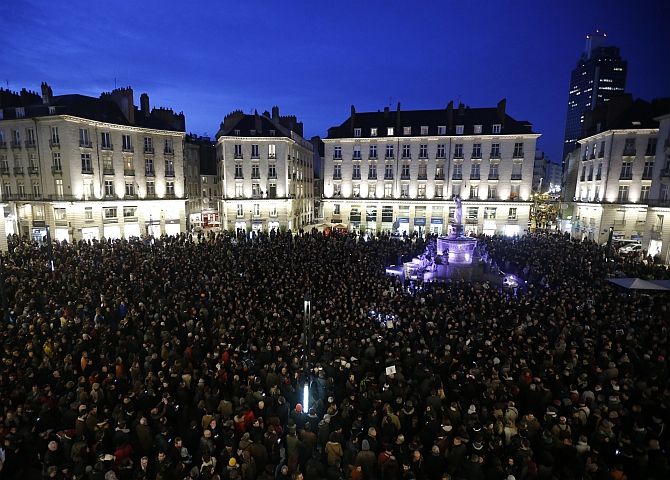 Similar gatheringing were witnessed in other parts of France as well with many holding black signs reading “Je suis Charlie” (I am Charlie). Social media was flooded with the same phrase, with Twitter using the #JeSuisCharlie hashtag.

In a televised address on Wednesday evening, French President Francois Hollande said the attack was an attack on all of France and on the ideal of freedom of expression. 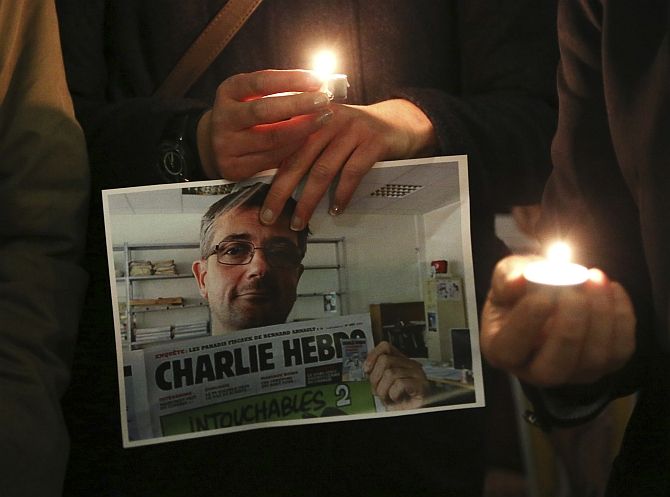 People hold candles as they pay tribute to the victims. Photograph: Francois Lenoir/Reuters

Meanwhile, condemnation of the attack has been pouring in from around the world.

US President Barack Obama directed his officials to provide any assistance needed to bring to justice perpetrators of such a "cowardly" and "evil" assault.

"I strongly condemn the horrific shooting at the offices of Charlie Hebdo magazine in Paris that has reportedly killed 12 people. Our thoughts and prayers are with the victims of this terrorist attack and the people of France at this difficult time," Obama said in a statement.

"France is America's oldest ally, and has stood shoulder to shoulder with the US in the fight against terrorists who threaten our shared security and the world. Time and again, the French people have stood up for the universal values that generations of our people have defended," he said.

"France, and the great city of Paris where this outrageous attack took place, offer the world a timeless example that will endure well beyond the hateful vision of these killers," said the US President. 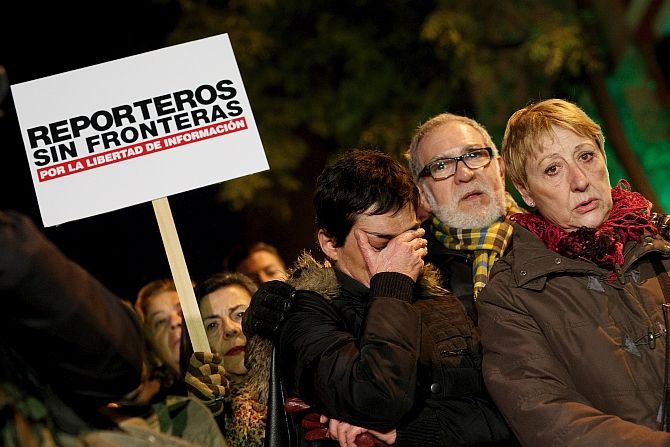 A woman reacts as another woman holds a placard reading 'Reporters without borders, for freedom of press' during a gathering of people showing their support for the victims of the terrorist attack. Photograph: Pablo Blazquez Dominguez/Getty Images

"We are in touch with French officials and I have directed my Administration to provide any assistance needed to help bring these terrorists to justice," Obama said.

"The fact that this was an attack on journalists; it's an attack on our free press....These terrorists fear freedom of speech and freedom of the press," Obama told reporters in the Oval Office of the White House ahead of his meeting with Vice President Joe Biden and Secretary of State John Kerry.

"Our counter-terrorism cooperation with France is excellent. We will provide them with every bit of assistance that we can going forward. I think it's going to be important for us to make sure that we recognise these kinds of attacks can happen anywhere in the world," he said. 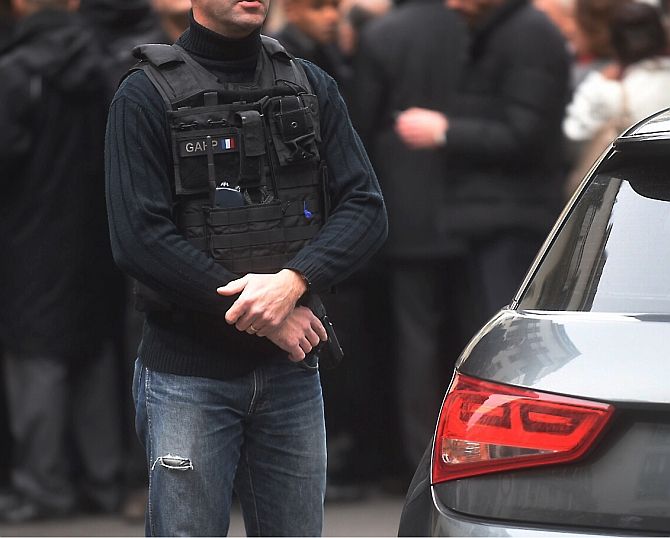 Police officers gather in front of the offices of the French satirical newspaper Charlie Hebdo on January 7, 2015 in Paris. Photograph: Antoine Antoniol/Getty Images

Charlie Hebdo gained notoriety in February 2006 when it reprinted cartoons of the Prophet Mohammed that had originally appeared in Danish daily Jyllands-Posten, causing fury across the Muslim world.

Its offices were fire-bombed in November 2011 when it published a cartoon of the Prophet which is against the tenets of Islam.