When I began this column those familiar lines from Shakespeare's play within a play 'What's Hecuba to him, or he to Hecuba/That he should weep for her?'/ were ringing in my ears, warning that race murder in Minneapolis was no concern of mine.

As I read and wrote, the lines changed to John Donne's 'No man is an island entire of itself; every man is a piece of the continent, a part of the main...'

So much death and disaster surround us in India that a white policeman kneeling on the neck of a 46-year-old North Carolina Black for nearly nine minutes and the tempestuous response to it, can seem like small sordid details in a distant tapestry.

It resonates throughout the world because as an American journalist wrote, if the President says something it is news.

So is anything that happens in the US.

The Lone Superpower's doings affect all our lives.

The Western-dominated infotainment industry sees to it, aided by our own awareness of power and complexes of race and colour.

Little that occurs here is even reported abroad.

But faraway communities grieve with Minneapolis because we suffer our own domestic Donald Trumps; we mourn our own George Floyds.

If Trump's Bible-in-hand pose outside a Washington church was theatrics, so are lofty invocations of 'Digital India' while Devika Balakrishnan, only 14, poured petrol on herself and blazed to death because her family couldn't afford a television set or smartphone for online lessons.

If the white police officer who kept his knee on Floyd's neck while he gasped 'I can't breathe' was brutal, so are Indian policemen I see on television lashing with their lathis at queues of jobless migrant labourers trudging to nowhere under a pitiless sun.

Brutality is commonplace here and class-driven.

The names of the 16 migrant labourers whom a roaring freight train crushed to death as wearied by days of trudging, they slept on the permanent way -- their final sleep -- weren't even mentioned: they are the faceless multitude.

Two teenage girls, Bhagya Laxmi and Bijay Laxmi, will never see their father again because he was desperate to see them: Having waited nine weeks for a Shramik Special and then suffered the isolation of quarantine, ailing Brajabandhu Rana jumped over a six-foot wall to his death.

The dead Floyd is everywhere.

Thousands of French demonstrators in Paris, Lille, Marseilles and Lyon see him as Adama Traore, a black Frenchman who died in police custody four years ago.

His agony prompted hundreds of Japanese to protest outside Tokyo's Shibuya police station when policemen used force to question a Kurdish man over a traffic violation.

Australia's Opposition spokeswoman on indigenous people mourned more than 400 Floyds -- the aboriginal Australians who had died in police custody in recent years.

Perhaps it was not quite so selfless when Ghanaian, Kenyan, Zimbabwean and South African politicians co-opted Floyd as their own.

Some of these outrages could be seen and suffered.

I felt entitled to comment on them, even to hope that my inadequate words of condemnation might touch some reader able to influence the course of justice.

But anything said here about the Minneapolis murder won't even reach anyone remotely connected with the atrocity.

Our worlds are as distant as Hecuba's terror as she watched Pyrrhus slaughter her husband, Priam, king of Troy.

But to plead distance to avoid comment is begging the question in a borderless word where the right to life, to civil rights and press freedom are all threatened.

Hamlet saw Priam's death as the killing of his own father; he also saw himself as Pyrrhus who avenges the death of his father, Achilles, by killing Priam.

'No man is an island entire of itself.'

Since truth and falsehood, vice and virtue, life and death are the same for everyone the world over, we cannot ignore Donne's 'any man's death diminishes me, because I am involved in mankind'.

George Floyd hadn't led an impeccable life, but his murder was a crime against humanity. 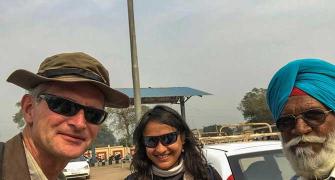 Trump and Thakur: With licences to kill