Trump and Thakur: With licences to kill

'In both cases, there is a sneering disregard for the established processes of law while dealing with what the American president and the junior Indian minister regard as unpardonable behaviour,' notes Amulya Ganguli. 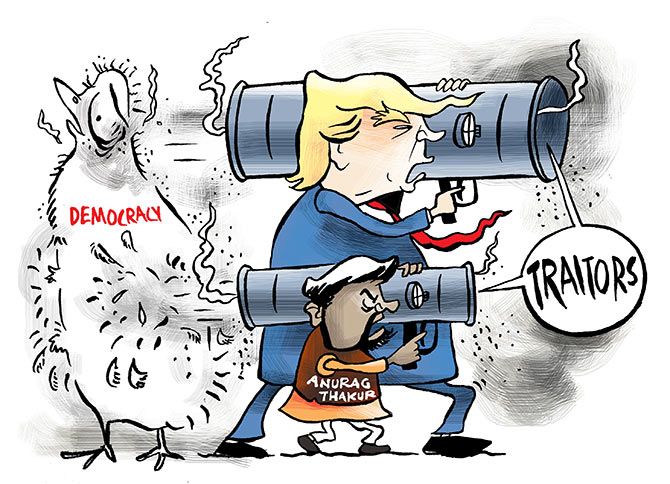 The similarity between United States President Donald J Trump's exhortation, 'when the looting starts, the shooting starts', and India's Minister of State for Finance Anurag Thakur's call for shooting the 'traitors' -- 'desh ke gaddaro ko... ' -- is too obvious to be stated.

In both cases, there is a sneering disregard for the established processes of law while dealing with what the American president and the junior Indian minister regard as unpardonable behaviour.

Not only that; there is also a sense of righteous elation in their orders for eliminating the suspected wrong-doers.

In their views, the two men were doing no more than urge their followers to do their duty for the nation

It is an attitude which comes naturally to dictators, to whom what is known as kangaroo justice is the right way to meet out punishment to the culprits.

It is unacceptable in an open society

Yet, if the leaders of the world's oldest and largest democracies can indulge in such rhetoric, the reason is their politics.

The black-and-white world of the rightists comprises those who are on their side, the nationalists, and those who are not, the anti-nationals or traitors.

Not surprisingly, the second epithet has been routinely levelled against the Opposition parties in India by Thakur's party although one of its senior-most leaders, the nonagenarian Lal Kishenchand Advani had disapproved of it.

It isn't very different in the US though the differentiation is not made as often as in India.

However, irrespective of the frequency with which the government's critics are stigmatised as unpatriotic, the objective is the same.

It is to further consolidate the ruling party's base of support even though they have consistently been told that the Opposition, first, has done nothing for the nation in the period when it was in power and, secondly, that it is either in hand-in-glove with a hostile neighbouring country or with inimical elements within.

The danger of peddling this narrative is that in the process of firming up its base, the rightists can bring into disrepute the existing system by the subterranean suggestion that the very presence of anti-nationals in the polity plus the fact that it sometime wins elections underlines the faillability of the present political/administrative set-up.

The insidious propagation of such a standpoint by means of winks and nudges may not matter much in America.

But it can posed a covert threat in a much younger democracy like India which has just transited from the post-Independence one-party rule of the Congress at the Centre to a coalition arrangement to the BJP's current dominance.

The difference between the Congress's earlier hegemony and the BJP's present ascendancy is that whlle the Congress saw itself as the natural ruler of India because of its role in the Independence movement, the BJP places its legitimacy on its Hindu background which, according to its worldview, makes it the true heir of the country's historic, pre-Muslim and pre-British past by ending the 'slavery' of the last 1,200 years dating back to the entry of Muslims in the subcontinent in the 8thcentury and including the British and Congress periods.

Therefore, so far as the BJP is concerned, India's true history started with the BJP's ascent to power in May 2014.

Prior to that, it was the rule of the anti-naionals.

One can understand, therefore, why the junior minister was so energetic in advocating the shooting of the traitors.

Trump's, on the other hand, was no more than a routine response to a law and order situation in sync with America's trigger-happy culture.

He was not carrying, as the BJP does, the civilisational burden of ridding the nation of those who have no right to be there.

Despite the similarity, therefore, the import of the Indian minister's threat is more sinister. 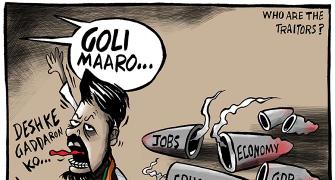 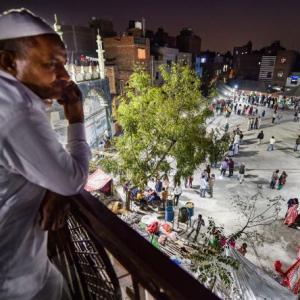