'Give cash assistance of Rs 75 per person per day and an android phone and you will see the economy reviving.' 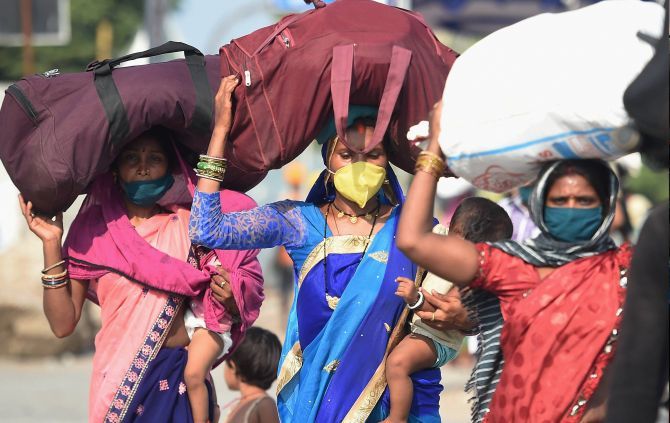 IMAGE: Migrants from Uttar Pradesh walk to Chennai's Central railway station to board a train home, May 28, 2020. Photograph: PTI Photo

The Impact and Policy Research Institute -- along with the Centre for International Design and Planning, University of Florida, United States -- and support from Action Aid Association and other civil society organisations, conducted a survey, Life in the Era of COVID-19.

This survey was conducted from May 7 to May 17, during the lockdown, on the urban poor working in the unorganised sector and staying in slums.

In what is said to be the largest telephonic-survey based study, some 3,121 families in more than 50 cities in India were interviewed.

Questions were asked about the effects of the lockdown on their lives and whether the government schemes have reached them.

"Rs 500 that is being deposited through the Pradhan Mantri Jan Dhan Yojana to the bank accounts of the poor is too less. Half-a-litre milk costs Rs 20, so what will a family do with Rs 500 per month? They will not even be able to drink tea for the whole month with that money," Dr Arjun Kumar, director, IMPRI, and visiting scholar fellow, China-India, Ashoka University, points out to Syed Firdaus Ashraf/Rediff.com.

What did you find in your survey about the lives of the urban poor people during the lockdown?

The major finding is that the livelihoods of six out of 10 urban poor people have gone due to the lockdown.

And if you talk about the casual labour category, then more than 80 per cent of them have lost jobs.

Cash, jobs and food are the three major concerns for the urban poor. They are anxious about the future.

More than 80 per cent people feel that as soon as the lockdown is over, they will go back to work.

Other findings are that most people who had ration cards got food on time, and 60 per cent people said they were happy with rations being supplied (by the government).

You are saying that 40 per cent with ration cards aren't getting rations. Aren't ration shops supposed to be transparent after the introduction of biometrics?

We have highlighted this issue in our case study. Even Jean Dreze and other economists highlight this point. This is happening specially in places like Jharkhand.

Some people who stay on rent in cities don't have documents, therefore they miss out.

Now after Prime Minister Modi's Aatmanirbhar Bharat push, there are talks of 'One nation, one card'. We hope, in a phased manner, this will be implemented across India.

Other problem that we found was Rs 500 that is being deposited through the Pradhan Mantri Jan Dhan Yojana to the bank accounts of the poor is too less.

Half-a-litre milk costs Rs 20, so what will a family do with Rs 500 per month? They will not even be able to drink tea for the whole month with that money.

The latest Economic Survey spoke of 'Thalinomics', which says that a good vegetarian thali costs Rs 25 minimum and a non-veg one costs Rs 40.

So, I am saying one dollar and one android phone per person should be given, per person, not per family.

Rs 2,000 in cash should be given to every person every month to solve the problem. And an android phone so they can download the Aarogya Setu app.

For the better health of poor people, the Aarogya Setu app is necessary. So they can be up to date with the latest technology, be healthy and physically fit.

We have so many schemes for the poor, therefore, if we do direct cash transfer of Rs 2,000 per person per month, we will see a change in their lives for sure.

What is happening to Aayushman Bharat, that offers health insurance for poor people?

We found out that only 10 per cent of the population benefits from the Aayushman Bharat scheme (under which Rs 5 lakh insurance is given to each family).

There are so many schemes which are not reaching the poor and even if they do, only about 10 per cent benefit (from them).

In terms of pure numbers, if you divide Rs 20 lakh crore value of the financial package by the population of India, each person gets Rs 15,000.

But in reality, we don't give poor people more than Rs 500 per month.

If you look at developed countries, this money will be spent only on a one-time meal.

In the United States, $300 to $400 are given weekly to the unemployed as allowance. Therefore, we feel our government too can give $1 (em>about Rs 75) a day to every poor man of India.

No GST is being collected for now as no sales are happening so there is no revenue for the government. Then how do you expect the government to give out $1 a day to every poor person?

We have to decide where to spend our resources. It is possible to do if we reorient our budget.

We can, say, for example, reduce the money given to the UDAN (regional air connectivity) scheme and pay more attention to health and other sectors.

It is just that we need to re-focus and reorient our budget and give priorities to the right sector.

The best part of this government is that they have kept our macro economy very strong and sound.

I am stressing on a dollar because we do not want to go back to the 1991 days where we were running out of foreign reserves.

At present we have dollar reserves worth Rs 35 lakh crore and if we do not use it wisely and bring confidence in our people, what is the point of having that money?

I am just saying give these poor people some dignity.

You also said job loss is temporary and you think people will get their jobs back. How will jobs be created in the absence of demand?

Therefore, I am saying give cash assistance of $1 per person per day and an android phone and you will see the economy reviving.

If you do that for three months, then they will spend money and economic activities will regenerate.

We speak of Mahatma Gandhi and the Antyodaya Anna Yojana (providing food to the poorest segment of population) all the time, and this is the time to help poor people with schemes.

What is the mood of the nation as per your survey?

The mood is that of pessimism, confusion and sadness.

But we do not have data prior to the lockdown to compare.

Why don't people know of government schemes in spite of the PM talking about them all the time?

The problem is that every three months a new scheme comes. There is no consistency in following up on schemes.

Like, if you see PM Modi's flagship programmes, Swachh Bharat is doing well because he constantly speaks about it.

On the other hand, many people do not know about Ayushman Bharat, which is also a good scheme. There is not much awareness about it.

If we push Ayushman Bharat the same way as Swachh Bharat, then that too will do wonders. 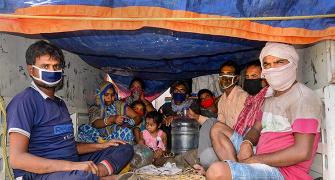