News
Business
Movies
Sports
Cricket
Get Ahead
Money Tips
Shopping
Sign in  |  Create a Rediffmail account
Rediff.com  » News » 10 ways in which Modi changed my life for the better What has Prime Minister Narendra Damodardas Modi achieved in the last five years?

If you are a critic, then you will point at the growing intolerance, suppression of artistic freedom, mob lynchings, media censorship, virtual dictatorship and so on.

But, then, there must be certain good things which the Modi government has done in the last five years, isn't it?

I don't know about you, but here are 10 ways in which I think the Modi Sarkar has changed my life for the better.

It is a gesture that earlier governments could have done, but never did.

For the last 20 years, I have been paying my taxes on time and filing my income tax returns, but not a word of appreciation from any government.

The Modi government sent me an income tax appreciation certificate, thanking me for paying taxes on time and how it helps in nation-building.

Now this was a proud moment for an honest taxpayer..

Congress President Rahul Gandhi keeps chanting 'chowikdar chor hai'. However, every day, when I stand in my balcony, I see a nearby building, ready for possession but the government has not given it an occupation certificate.

Reason? The building has two extra floors and I am told that since my area is near the coastal zone, the builder did not have the required clearances from the government.

In Mumbai, you have to have coastal zone clearance certificate before getting an occupation certificate.

And since the Modi government is so strict, no builder can do anything illegal.

Now rumour has it that builders are waiting for the Modi government to be voted out of power and the Congress to come back so that such projects get clearances.

No showing off of wealth

Before demonetisation, my neighbours used to flaunt their wealth so much that I would wonder where they were getting their money from.

One neighbour spent close to Rs 50 lakh just to renovate his apartment.

It reminded me of Onida TV's catchline: 'Neighbours' Envy, Owner's Pride'. I always envied the black money lying with our rich neighbours.

Now, such black money holders envy honest tax payers. They worry that Modi is keeping a hawk's eye on their black money.

It was a pain for students to locate gazetted officers or a notary or a special executive officer to get their documents attested.

This is a huge relief for students across the country.

The Bharatiya Janata Party-Shiv Sena government in Maharashtra has given a nod for 16% reservation to Marathas in education and that has led to 68% reserved seats in Maharashtra.

Now add the 10% for economically backward class quota passed by the Modi government which brings the reserved seat to 78 per cent.

My daughter has realised there is no way she can get a seat out of the 22% available in the open category.

She has decided to drop science and is opting for commerce, which means her education will almost be free of cost as my wife is teaches accounts.

My mother-in-law wanted to get an Aadhaar card at the age of 85.

I made just one phone call and an Aadhaar mobile van was at my home.

My mother-in-law could not believe that government services were being delivered at the doorstep, and that too without paying a bribe.

Once, hearing the onion price of Rs 100 a kilogramme, my wife almost choked.

Modi has brought many crops under the Essential Commodities Act and India today has become a nation of surplus crops (external link).

Onions have not touched Rs 100 a kg and the Modi government has successfully controlled food inflation.

However, many say this has resulted in the farm crisis as farmers are not getting their due price for their crops.

Before 2014, my favourite food was beef steak.

Then, Modi made an election issue out of the pink revolution and ensured that the beef business was shut down in Mumbai.

The BJP-Shiv Sena government banned beef in Maharashtra in March 2015, to be followed by several BJP-ruled states.

Beef almost disappeared from the menu of several restaurants in Mumbai.

I have tried out more than two dozen vegetarian restaurants till date, thanks only to the beef ban.

And I am losing weight too because I am eating healthy vegetarian food.

Two weeks ago, I got a message on my phone that my gas cylinder had been delivered, but it wasn't.

In Modi's digital and transparent India, consumers can track everything.

I was sure my gas cylinder had been delivered to someone else in exchange for money.

I called up the gas agency and told them, 'You know how hard Modi is trying to catch corrupt people and here you are openly indulging in corruption by misplacing my gas cylinder.'

My gas cylinder was delivered an hour later.

A client of his had gone bust, he said, and in lieu of money, he had given my electrician acquaintance school bags to cover his losses.

My friend, a hardcore Modi bhakt, told me the client had gone bust because he could not take the double whammy of demonetisation and GST.

He himself was depressed as business was not looking up.

But he still supports Modi. Why?

"Modi is streamlining the Indian economy and therefore the economy is in doldrums at present," my acquaintance argued.

"And even if I do not see achche din, my children will surely do. I am very positive about this," he added.

I have become very positive in life. I am very confident that the future of India is very bright for my only child under Narendra Damodardas Modi's leadership. 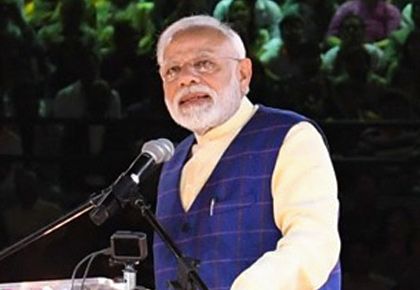