News
Business
Movies
Sports
Cricket
Get Ahead
Money Tips
Shopping
Sign in  |  Create a Rediffmail account
Rediff.com  » News » Social media: It is messy, but it is democratic

Purists may balk at this level of public discourse, but no one can deny its ability to marshal opinion, says Vikram Johri.

In response, Khanna wrote on Twitter: 'Better than a regressive tweet like this that calls 'progressive' pieces fluff and believes that marriage means sharing the same ideologies.'

I entirely agree with Khanna, of course, but there was something else about Chopra's tweet that caught my eye: 'Pogrom Modi'.

Since Modi became prime minister, the 2002 Gujarat riots are rarely brought up in the media.

The sense is that since he has never been convicted by a court of law in the cases related to the riots, he is free of blame, and having faced massive criticism from many quarters, he should be allowed to get on with things.

This impression is proper.

Indeed, since 2014, Modi himself has sought to be statesman-like, speaking up, say, for the rights of Muslim women who face the brunt of triple talaq.

Concomitantly, the rise of the Bharatiya Janata Party on the national scene has engendered a welcome airing of right-leaning voices in the mainstream media.

As one example, we now have primetime anchors actually defending the Indian position on Kashmir rather than going around in circles explaining how everything from Pakistan to Islamisation is secondary to Indian hegemony in the state.

It is debatable, to cite another example, whether the Jawaharlal Nehru University standoff would have triggered such divisive debates with another dispensation at the Centre.

The daily discussions, which were criticised for their decibels levels, ultimately helped issue clarity on what remains an important rider to freedom of expression: can that hallowed ideal be justified when the demand is to invoke violence against the Indian State, and by extension, the Indian people?

Meanwhile, as Chopra's tweet reminds us, the nature of media itself has dramatically changed over the years, offering all sides a platform to voice their views democratically, if messily.

Arundhati Roy's new work of fiction, The Ministry of Utmost Happiness was released recently, which comes 20 years after the mega-successful The God of Small Things.

In the interim, Roy has become an unabashed darling of the Left, faulting India and Indian society for any trouble at home and abroad.

If earlier, her fame had the aura, like her writing, of a sage-like figure trying to make sense of the bedlam surrounding her, now there are hordes on Twitter who are happy to question her on her selective outrage.

When Paresh Rawal made uncharitable remarks against her in relation to her views on Kashmir, the ensuing bile on Twitter brought into sharp relief arguments from both sides of the divide.

Purists may balk at this level of public discourse, but no one can deny its ability to marshal opinion.

But I digress. No amount of media democratisation can alter the truth.

Cow protection is an admirable goal only so long as it is not hijacked by murderous vigilantes.

More to the point, Modi's fantastic successes will not alter the perception that he has never properly addressed what happened on his watch in Gujarat.

This is perhaps what drives some like Chopra to continue to refer to him in the way he did.

To be sure, Modi has released statements to the media, as he did after his exoneration by the Supreme Court-instituted SIT, but he has never sought to sincerely reach out to the riot victims.

This is doubly baffling because he is a master communicator who has actively used the prime ministerial pulpit to articulate his vision for India.

On August 12, 2005, Manmohan Singh, who is often pilloried for his prime ministerial stint, spoke movingly in Parliament about 1984's anti-Sikh pogrom of Delhi: 'I have no hesitation in apologising to the Sikh community. I apologise not only to the Sikh community, but to the whole Indian nation because what took place in 1984 is the negation of the concept of nationhood enshrined in our Constitution.'

It is possible that Modi will never address Gujarat the way Singh did Delhi because he was himself at the helm when the riots in Gujarat happened.

It is also possible that like Singh, a BJP leader of the future will apologise to the nation for 2002.

Whatever be the case, Modi is at a point in his career where his refusal to address 2002 has moved from self-preserving to self-defeating.

Likely to remain prime minister till at least 2024, he clearly has an eye on his legacy.

Politically astute that he is, he must know that that legacy is unlikely to remain blemish-free. 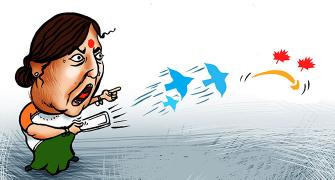