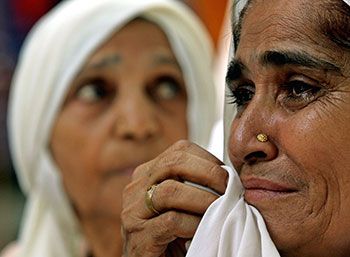 'The only sardars who were spared in the train were the six with us. And the credit goes to the innate goodness of the passengers in our coach.'

The passage of time has lent a surreal hue to the ghastly spine-chilling memories of 1984.

Those who survived to tell the tale wonder if that blood-curdling violence truly played out. Or is it just a recurring nightmare?

The scars have dimmed, but the memories are vividly etched...

I was a journalist who had finished a year's training at The Times of India and was confirmed at The Illustrated Weekly of India. My very first piece for the magazine was my personal experience. A Sikh and a staffer, I was to share the terror of a train journey on that fateful day.

There was a glint of madness in their eyes and murder etched across their faces. Ominous shouts and cries of 'Koi Sardar hai? Goli se maar
dalenge' followed. We were all shocked into a state of stunned numbness.

We were a group of 20 Sikhs on our way to Delhi for a wedding. When we boarded our train, the Deluxe from Calcutta's Howrah Station on October 31, we had never imagined that death and destruction were in store for us.

It was at 12.30 pm that we first heard that Prime Minister Indira Gandhi had been shot by her bodyguards and was in hospital. Our instant reaction was one of disbelief. The confirmed news of Mrs Gandhi's tragic assassination reached us over the radio at about 6.30 pm. And it was only then that we learnt that the two assailants were Sikhs.

Every passenger was in a state of shocked silence. Not one anticipated the disaster that awaited us at Ghaziabad.

The train reached Ghaziabad, 30 kilometres from Delhi, at 11 am the next day. That was the beginning of two harrowing hours for us, when we were suspended between life and death. A bloodthirsty mob, almost like a pack of hungry wolves hunting for prey, went from coach to coach in search of Sikhs.

In a frenzy of madness, the mob, armed with iron rods and knives, brutally dragged out Sikhs, burnt their turbans, hacked them to death and threw them across the tracks.

Even the old and feeble were not spared.

The barbaric mob, totally devoid of rationality, declared that women would be spared. But in what sense were they 'spared'?

What can be more torturous for women than seeing male members of their family brutally killed in front of their eyes?

The only sardars who were spared were the six with us. And the credit goes to the innate goodness of the passengers in our coach. Before the train even halted at Ghaziabad, the hysterical mob had caught a glimpse of the six turbaned Sikhs. One of whom was my father.

A fusillade of stones followed and the glass windows were smashed to bits. Shutters were hastily pulled down for protection. The police, we were told, could not control the mob and found it easier to turn their backs and walk away.

We had a ladies' compartment and the other passengers in our coach, realising there was more trouble ahead, suggested that the sardars in our group occupy it.

At first, they were reluctant, but we literally forced them in. I could well understand their discomfiture.

It was ironic. Sardars, who were historically known for their valour, had to now protect themselves by hiding in a ladies' compartment or else become victims of a hysterical horde.

My mother and the mother of the bride-to-be were also pushed into the ladies' compartment so that they could answer if any questions were asked.

The main door of the coach was locked from inside. We waited with bated breath. The mob, hell-bent on destruction, was not to be deterred. They pounded on the heavy metal door for over 15 minutes.

The incessant hammering was accompanied by threats to set the train on fire. One non-Sikh passenger shifted uncomfortably in his seat and felt that all of them would lose their lives if the door was not opened. But he was sternly reprimanded by the others who forcefully announced that under no circumstances would the door be opened.

Finally the mob broke open the door. Their violent mutilation of the train had whetted their appetite for more destruction. The savage mob stormed into our coach and walked past the ladies' compartment. Even before we could sigh with relief, they turned around and angrily demanded that the door of the ladies' compartment be opened, so that they could check for themselves.

By now our nerves had reached breaking point. Yet we couldn' lose our composure lest they suspect that something was amiss. My parents were inside. Yet my face could not betray any emotion.

We tried to convince them that there were just panic-stricken women inside, but the mob was adamant. They began to bang on the door. They seemed to grow suspicious at the sight of a large number of women outside the ladies' compartment and pointing towards us asked the other passengers, 'Are these women travelling alone?'

Even before I could bat an eyelid, a middle-aged Hindu replied, 'No, they are with us.'

The petrified screams of the two ladies from inside, our pleas and the persuasion of the other passengers finally seemed to convince the mob that there were no sardars. They retreated. After two hours of excruciating agony, we collapsed with sheer relief.

We had hoped that conditions in Delhi would be better, but sadly, no security arrangements had been made at the station. There were many sardars stranded in the waiting room, while the women left the station to make arrangements for them.

I left the station at 3 pm with the ladies in our group, while the sardars with us, who were the only ones on the train to survive the ghastly disaster, waited at the station.

They removed dead bodies from the train and assisted the injured. By 8 pm we were able to make arrangements for them to be safely ferried out of the station.

In a state of stupefied silence, I saw bodies of sardars with rivulets of blood streaming down their faces, being unloaded from the train in which I had travelled.

Brutally battered bodies of innocent Sikhs reached Delhi from other incoming trains as well. Innocent people who had done nothing. Except for being Sikhs and travelling to Delhi on that fateful day.

Three decades later when we as a family talk of 1984, there is a sense of disbelief: My 83-year-old father Jasmit Singh says, "It is a second life for me. I can't forget that train journey. Those memories send a shiver down my spine. It seems unreal. Could this have really happened?"

"My grandchildren will never believe this: Sikhs, a community known for their courage and patriotism, were butchered like cattle while women wept and children trembled with fear," my father adds.

Truly, an ugly mark on the history of Independent India. Particularly for those, like my parents, who had lived through Partition.

My mother, 78-year-old Deesh Singh, who was one of the ladies in the compartment where the six turbaned men were made to hide, reminisces:

"Even after three decades the images have clarity. Initially two of us screamed as we had to convince the horde that we were just women inside the ladies' compartment. But when we heard the thunderous anger in their voices as they searched for sardars, the enormity of the situation and the gravity of the crisis overtook us. We were no longer pretending to scream, the shrieks just poured out. It seemed as though the world had come to an end."

While under the Congress administration, Delhi burnt for over three days, the situation in Calcutta was different.

My brother Dinendra who had not accompanied us, was in his office in Calcutta when the news of the assassination reached him. He had not expected a backlash against our community.

"Only when news started filtering in about the mayhem in Delhi and Uttar Pradesh, did some level of caution set in. My panic-stricken Hindu business partner refused to let me leave the office that day," he recalls, "Finally he decided that he would drive and I would lie on the rear seat. Stray incidents apart, Calcutta reported complete safety for the Sikhs, thanks to the firm intent of the then chief minister Jyoti Basu."

There are some who believed that the blood bath and the carnage were a spontaneous outpouring of grief. But members of the Sikh community vehemently disagree. "This was a State-sponsored massacre where the Congress party abused the government machinery to indulge in riots, murder and shameful looting. And has denied justice by protecting and shielding the culprits," adds Dinendra.

Tragically, 1984 had the support of a paralysed administration. There was no political will to douse the raging flames.

Painful memories return each year on October 31. And then once again with an abiding faith in a secular India, an inherently strong and resilient community marches on buoyantly with the business of living.

Image: Relatives of victims of the 1984 anti-Sikh riots weep during a protest in New Delhi. Photograph: Adnan Abidi/Reuters 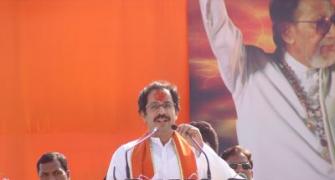 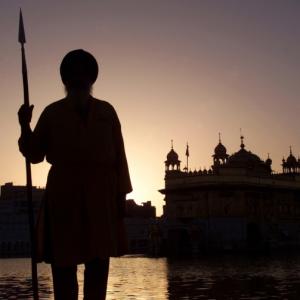