It is wrong to say the Congress doesn't matter.
Certainly one set of people who do not believe that for a minute is the BJP.
That's why even in his speech in Parliament on Constitution Day, Mr Modi called dynastic politics a threat to democracy, observes Shekhar Gupta. 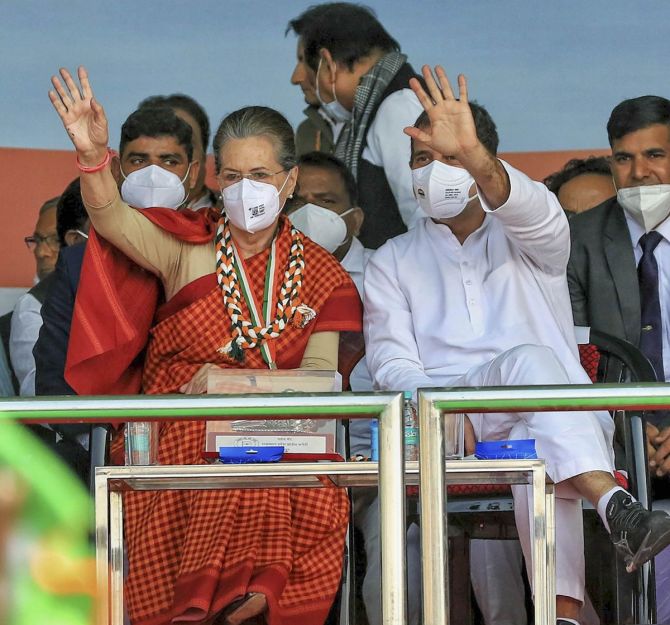 Mamata Banerjee underlined the obvious when she said on her Mumbai visit that the United Progressive Alliance didn't exist any longer.

The fact is, the UPA ceased to exist as an effective alliance after the 2014 general elections.

What she and Prashant Kishor, who we might describe as her NSA (National Strategic Advisor) said about the Congress, however, is more significant.

In her interaction with some leading lights of civil society in Mumbai, including some from popular culture mostly seen supporting the Congress on social media, Ms Banerjee taunted Rahul Gandhi without naming him.

To fight back in politics, you have to be on the ground, not flying overseas all the time.

The Congress, she said, was no longer convincing anyone it had it in its gut to fight Narendra Modi. We are paraphrasing of course.

Mr Kishor made it a one-two punch by tweeting the next day that while the Congress could still be a force, no individual had the divine right to claim its leadership. This triggered off theories.

First, predictably, that Ms Banerjee was now telling her old party that it needed a worthier leader, someone with the track record of fighting and beating the Modi-Shah Bharatiya Janata Party more than once, and not its 'reluctant' dynasty.

The second was that Mr Kishor had actually meant to clarify her move.

First by comforting the Congress that they weren't planning to gobble all its political space, but that they, like all of the Opposition, had a stake in the party reviving itself.

And second, that this won't happen under its current leader, namely Mr Gandhi, so they should bring about a change.

An inspired call for the equivalent of a shareholders' revolt seeking management change rather than a hostile takeover.

All non-BJP parties in India, even those still in the National Democratic Alliance tent even as they sulk in their irrelevance, have issues with the BJP.

Individually, none has the ability to take them on.

Or even bring about some balance of power so their bargaining position with the Centre, and more immediately important, over the use of its 'agencies', would improve.

They may be able to contain the BJP in their individual states.

But nationally, they also know that even if a dozen of them came together, they will be cut down piecemeal.

The challenge needs to have a core with a presence across multiple states.

In short, the Opposition in India has a Congress-sized problem.

No political force likes to be asked hard questions.

Introspection, internal debate, or chintan-manthan (thinking and churning) as it's usually called in politics, is even tougher in today's parties, all of which, without exception, are owned by a personality or their dynasty.

That's why the first reaction is to rally around the leader, and crush the messenger's toes.

For example, see how the Congress, at least for a while, switched from attacking Narendra Modi even as another shambolic Parliament session began, and diverted fire to Mr Kishor instead.

Arguments like these are never won or lost by anyone.

But similarly, no one can change the reality of numbers, however brutal.

Here is the number that works for the Congress.

That, even in its second successive annihilation by the BJP, it retained a solid, unshakable block of 20 per cent votes.

That is more than any four parties other than the BJP, pick and choose from the NDA and UPA.

That's why all of BJP's victims, which we sometimes facetiously describe as the 'BJP-peedit samaj', want the Congress to revive.

Ms Banerjee and Mr Kishor would have to be delusional to believe that they can build such a formidable Trinamool Congress wave pan-nationally as to have these 130 million or so committed Congress voters shift to them.

Equally, they no longer harbour the illusion that the Gandhis can revive the party and threaten a clear majority for the BJP.

That's why they want a new leadership for the Congress.

Or offer it the option of seeing itself as a start-up with 13 crore votes as its initial capital, and a new management -- theirs, of course.

There are other ways of looking at the figures for the Congress.

One is to remember that it has only 53 members in the Lok Sabha, which isn't even 10 per cent of the House, although an improvement of nine seats over 2014.

When you dice it further, it becomes more problematic.

Where do the party's seats come from? Kerala brings 15 and Punjab eight, and both are to the party's own credit.

Then the eight in Tamil Nadu are owed mostly to the big brother there, the Dravida Munnetra Kazhagam.

Then follows the kind of score a cricket team has in a score of 53 all out.

Three each in Assam and Telangana, two each in Chhattisgarh and West Bengal, and then one each in 12 states.

Under that significant figure of 20 per cent vote therefore, lies the ugly reality of the party not scoring double figures in any state except one, Kerala.

Today, can it expect to do much better than this in a fresh election? Repeating this in Kerala will be a challenge, in Tamil Nadu they will be at the DMK's mercy, in Punjab they are divided and in Telangana, West Bengal and Assam weakened further.

The harshest truth at the bottom line is that unlike almost any other Opposition party in the country, the Congress is the only one that doesn't 'own' a state.

Until a couple of months ago it could make that claim about Punjab. It has worked pretty hard to ensure that is no longer so.

In comparison, the TMC has West Bengal and Stalin, Tamil Nadu, two of India's three large states (states that send more than 40 MPs to the Lok Sabha).

The Congress splits Kerala with the Left on the Vidhan Sabha-Lok Sabha basis, so does not own that state.

Nowhere else does it even come close.

In Maharashtra, where it has swallowed the chalice of poison to stay in the ruling alliance, it is now the weakest of the three partners.

Y S Jagan Mohan Reddy and KCR dominate their states, the Thackerays have risen in status in Maharashtra, the Congress begins with just two Lok Sabha seats in Chhattisgarh and none in Rajasthan, the two large states it rules.

In all of Uttar Pradesh, Bihar, Rajasthan, Madhya Pradesh, Haryana, Uttarakhand, Jharkhand, Chhattisgarh, Odisha, Himachal Pradesh and West Bengal, it has all of 10 out of 286 seats.

All these are states it has ruled more than once in the past.

It is wrong to say the Congress doesn't matter.

Certainly one set of people who do not believe that for a minute is the BJP.

That's why even in his speech in Parliament on Constitution Day, Mr Modi called dynastic politics a threat to democracy.

It is also wrong to deny that the Congress has no ideological glue left and that no party person swears by it any more.

If that wasn't so, many more would have gone to the BJP, and certainly so many others would not have preferred the still marginal (in national terms) parties like the TMC.

Equally, it is lazy and self-destructive of those in the Congress to hang on to the 'inevitability' of the voters ultimately saying a collective sorry for having voted for Mr Modi and returning to him.

And if they continue to believe that, note that other data point.

It is this that scares those still not in the Modi camp.