Congress is the only other horse in the race for national power, never mind how distant.
Narendra Modi and Amit Shah know better than to take the Congress lightly, observes Shekhar Gupta. 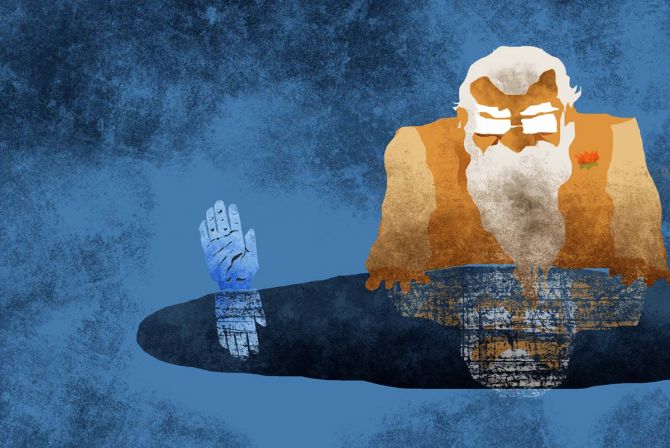 The week of this column transcends two anniversaries of great political significance.

One, is the completion of two years of the Narendra Modi government's second term.

And the second, 30 years of Rajiv Gandhi's assassination. These anniversaries are a good juncture to look at the future of our two biggest political parties, the BJP and Congress, leading up to the summer of 2024.

We will leave the past aside. In politics as with mutual funds investments, the past is not necessarily the best guide to the future.

The future of the two adversaries is linked. We know that in the third decade after Rajiv Gandhi's assassination, the party he left behind has diminished into a very distant also-ran in national politics.

In both the 2014 and 2019 general elections, it was beaten in nearly 90 per cent seats where it was the main challenger to the BJP.

Because, one, even if beaten 92-8, the Congress was the party closest to the BJP in that race.

Second, while the BJP under Modi and Amit Shah collected about 38 per cent of the vote (all figures rounded off), the Congress was at 20.

At a half, so what's the big deal?

Because no other party in the country crossed double figures.

Or, what if I told you that no other three parties together, including among NDA allies, add up to double figures?

Further, if you add up the vote percentage of all non-Congress Opposition parties -- including UPA allies: DMK, NCP, RJD, with more than one per cent of vote-share -- they don't reach 20, which was the Congress tally.

In comparison, almost every other anti-BJP party lost some loyal voters.

Here's a proposition. Even annihilated 92-8, Congress is the only other horse in the race for national power, never mind how distant.

Watch Narendra Modi and Amit Shah. They know better than to take the Congress lightly.

That's why even in states where the Congress doesn't matter (West Bengal) or where the BJP doesn't (Kerala, Tamil Nadu), they attack the Congress and Gandhi dynasty.

That's why the relentless campaign for the 'Pappufication' of Rahul Gandhi, on Sonia Gandhi's origin, hunt for defectors from its ranks, and particular expression of friendliness, even tears, for those who might be seen to be sulking in the Congress.

It isn't my case that the Congress or the Gandhi family don't understand this.

They might take the Modi-Shah BJP lightly only in the sense that they are contemptuous of them, and probably do not acknowledge why they keep winning by these humongous margins.

The Congress has three key flaws in its thinking:

Mamata Banerjee and her TMC are the flavour of the season.

She's the heroine Modi-Shah critics look up to. But in politics, victories are more perishable, or time-barred than defeat.

For now, politics will leave her story behind soon.

My astute colleague and ThePrint's political editor D K Singh points out that in the run-up to the big one in 2024, 16 Indian states will have their elections.

There will be seven next year: Uttar Pradesh, Uttarakhand, Punjab, Goa and Manipur in February-March 2022, Gujarat and Himachal Pradesh in October-December 2022.

In 2023, we have nine: Meghalaya, Nagaland, Tripura in February, Karnataka in May and then the bellwether Madhya Pradesh, Rajasthan, Chhattisgarh and Telangana plus Mizoram in December.

In all of these barring Uttar Pradesh, the Congress will be the BJP's main rival.

Even some success in these can revive the party and make it a more credible challenger for 2024. Defeats can break it up.

It is simplistic to say that the Congress is letting the side down.

As Om Parkash Chautala lectured me in an interview on NDTV's Walk The Talk, nobody is in politics for others. "Yeh dharam-karam ya teerthayatra nahin hai. Yeh satta ke liye hain," (this isn't altruism or a pilgrimage. It's for power), he said.

Further, it's pointless to say: If only the Gandhis were to move away and leave the party to a new leadership.

Or, if only at least Rahul was to go. You can deliver the same homily for the 178th time. It won't happen.

The truth about the Congress is what Modi and Shah embrace, but many Congress supporters don't.

That without the Gandhis, there will be no Congress.

They aren't able to get the votes beyond that 20 per cent today, but they keep the party together.

The BJP gets its centre of gravity from the RSS, which, whether you adore or hate it, is an institution.

The lone pillar Congress stands on is The Family.

But politics is never a one-horse race for ever. Can Modi's third bid for power be made more challenging? If so, who would do it? And how?

Many third, fourth, secular, progressive fronts have been tried in the past.

They fail, and make a bad case for the future.

We can list them all from the Samyukta Vidhayak Dal in 1967 to the many Mahagathbandhans lately through V P Singh's Jan Morcha, United Fronts with prime ministers on daily wages and so on.

Yet, we can argue on the other side too. Regional leaders can help defeat a leader as formidable as Vajpayee in 2004.

They can also bring additional votes to the Opposition.

Congress and the other Opposition parties in what we might loosely describe as the Modi-peedit samaj, have another option.

Think of what a company with great legacy brands and strong old customer loyalties, but losing out to niftier challengers does? It gets a CEO from some place else.

It won't happen in the Congress. But, can it happen with a larger Opposition coalition with Congress at its core? What it brings to the table won't be the charisma of its leaders, but that loyal 20 per cent customer base.

If such a thought emerges, Mamata Banerjee and others like her can be back in the reckoning.

It would also mean the Congress giving up the delusion of being the natural party of governance.

It will be painful, but not impossible.

Nor an irrational fantasy nursed by those who ask the Gandhis to go away. 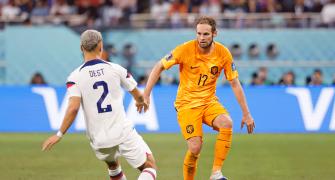 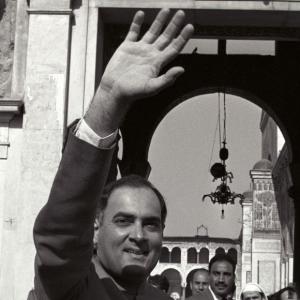