The high table might have yielded relief at personal levels, but its political implications look forbidding at this point in time, observes Mohammad Sayeed Malik, the distinguished commentator on Kashmir affairs. For the umpteenth time, 'Kashmir' has proved to be New Delhi's most favourite political chewing gum since 1947.

It is readily accessible and yields long lasting flavour felt equally, near and afar.

Conceived apparently all of a sudden, the June 24 all-party meeting of leaders from Jammu and Kashmir, hosted by Prime Minister Narendra Modi in New Delhi, discussed no specific issue nor came out with any concrete decision, and yet it was unanimously hailed as a successful venture and as a 'move forward'.

What that means in real, practical, terms only the time can tell.

For the time being, there is no major change in sight in the meticulous politico-administrative roadmap laid out on August 5, 2019 when the rug was pulled from under the feet of the invitees to the PM's meeting and they were unceremoniously consigned to political limbo.

The body language of the invitees as well as the hosts, after the meeting, suggested visible/audible change in the atmospherics from New Delhi to Srinagar.

Even the usual rhetoric and its tone sounded differently.

More significantly, everyone appeared to be weighing his/her words.

This outcome suggests considerable improvement in the mutual relationship between the host and his guests who, till the other day, were dubbed as the 'Gupkar Gang' and sought to be consigned to eternal wilderness.

In the context of Kashmir politics, personal relationships have had much more to do with shaping the course of events.

The latest thaw needs to be watched for how it unfolds and, more significantly, how it facilitates or hinders resolution of ticklish issues arising out of the drastic action taken by the Centre on August 5, 2019.

Precisely, if the bon homie is meant to last and deliver, the BJP and the Kashmir mainstream parties would need to move from their stated positions.

As of now, there is no apparent compulsion for of the stronger of the two -- New Delhi -- yielding any ground.

The ground reality remains that in practical terms Article 370 is gone for good.

What then are the Kashmir-based mainstream parties left with to go before their people and seek popular support?

The stand taken by the National Conference that the apex court is the final arbiter is not going to go down well with its supporters who have helplessly watched the Union legislature demolishing the 'autonomy' edifice brick by brick without caring for its potential legal implications.

They see it as more a political issue and suspect ideological motives behind it.

Practically, there is nothing new in this tricky game.

The NDA establishment in New Delhi has apparently no compulsion to let it be otherwise.

So, the historical inevitability will once again prevail, at the expense of the weaker side.

Starting with Sheikh Abdullah, from the 1930s through to the 1940s and beyond, this harsh reality willy nilly got mixed up with a strong personality factor.

Names and party identities got mixed up with issues, clouding the ground reality.

The reality that at the end of each and every round it was the state and its people in the three erstwhile regions who found themselves at the losing end.

This mix up of issues with faces and groups became increasingly acrimonious after each round.

That explains how the Gupkar Alliance came to be maligned as the 'Gupkar Gang' until it re-established its legitimate political superiority and became fit enough for sitting across the high table.

But beyond that point, the path is fraught with uncertainties for them.

Will the NDA really go to the extent of making them feel comfortable enough as before? If so, what could be on offer?

As of now it looks quite a difficult bargain for them unless the other side shows (unlikely) generosity and unfamiliar accommodation to let old co-existence prevail.

Restoring even the bare minimum level of mutual confidence will take considerable time, even after the attitudes are softened as a result of the New Delhi meeting.

The damage done at the ground level is colossal, to the extent that the politico-ideological lines of division between the mainstream and the secessionists are no more as unbridgeable after August 5, 2019.

The reason being that the anger and alienation set off by the August 5, 2019 shock-and-awe strike has taken heavy emotional toll across the board.

Fear and apprehension triggered by a slew of suspicious looking executive orders only thickened the atmosphere of suspicion and doubt.

The meeting in New Delhi might have broken the ice in so far as the leadership is concerned, but the Centre has to go a long way to regain the popular trust at the ground level.

The emotional dimension of the problem -- dil ki doori, Dilli ki doori -- is easier said than done under the prevailing denuded political climate.

At stake is the credibility of the local mainstream leadership which is forced to once again put all its eggs in New Delhi's basket.

Looking from that angle, the outcome of the ongoing Delimitation (of assembly constituencies) as well is of critical significance.

The erstwhile J&K legislative assembly had specifically resolved to NOT go for fresh delimitation until 2026, as indeed is the case in the rest of the country where a similar Parliamentary resolution is in force and has not been touched.

Why only J&K? Suspicions are inevitable when this particular measure is read in the context of what all has been happening here since August 5, 2019.

For valid reasons or otherwise, this selective exercise is being suspected as extension of the design to change the demographic composition of India's only Muslim majority (erstwhile state) Union Territory.

Abrogation of Article 370 and Article 35A in 2019 are seen as the thin end of the wedge to change the communal ratio of the population.

There is no Pakistan factor involved in this deep-seated common fear that cuts across the pro-India and pro-Pakistan camps on the ground.

The local mainstream leadership too has a task on hand: To convince their respective supporters that their New Delhi meeting was not meant to make their personal lives easier.

They would have to show in which way this relief would percolate and make a difference in the choked atmosphere around cities, towns and villages.

The fear factor has gone on too long and produced negativity across the playfield.

Restoration of confidence is not going to be an easy task, especially if there are no perceptible rectification measures.

Local leaders have their credibility at stake.

So far, it has been the sympathy factor coupled with projections of the overall atmosphere that sustains their hold on their respective followers.

There is a limit to its longevity. Especially as after the New Delhi meeting the local leaders held out optimistic signs of improvement in the political atmosphere.

The high table might have yielded relief at personal levels, but its political implications look forbidding enough at this point in time. 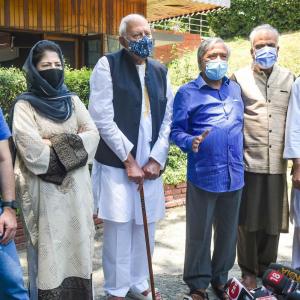