Prime Minister Narendra Modi on Thursday said he wanted to end 'Dilli ki duri' as well as 'Dil ki duri' with Jammu and Kashmir, which has been witnessing prolonged spell of militancy and unrest. 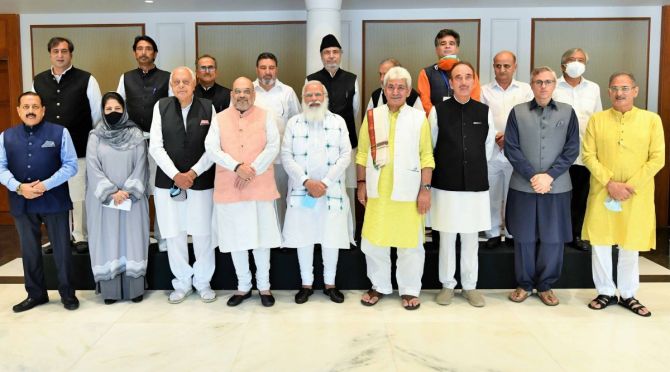 IMAGE: Prime Minister Narendra Modi and Union Home Minister Amit Shah along with prominent leaders from Jammu and Kashmir and others during an all-party meet in New Delhi. Photograph: ANI

He said this at a meeting held with 14 political leaders from Jammu and Kashmir to discuss the future course of political action -- two years after the abrogation of the Article 370 and bifurcation of the erstwhile state into two union territories.

Modi said he wanted to remove 'Dilli ki duri' as well as 'Dil ki duri' (distance from Delhi as well as distance of heart), according to official sources.

Modi patiently heard out suggestions and inputs from all participants and expressed that all of them shared their frank and honest views, the sources said.

It was an open discussion which revolved around building a better future for Kashmir, they said.

The prime minister stressed that the holding of assembly elections just like the successful conduct of the DDC polls is a priority, the sources said.

It was discussed that elections can happen soon after delimitation and by and large most participants expressed willingness for it, they said.

Modi emphasised the need to strengthen democracy at the grassroots and work together with the people of Jammu and Kashmir to ensure their uplift.

He expressed happiness on the commitment to the Constitution and democracy espoused by all participants.

Modi said that even one death in Jammu and Kashmir is painful and it is the collective duty to protect the younger generation.

He stressed that there is a need to give opportunities to the youths of Jammu and Kashmir and they will give back lots to the country.

The development achieved by Jammu and Kashmir was discussed in detail with implementation of many pro-people initiatives.

Modi expressed satisfaction with the acceleration of development in Jammu and Kashmir and said that it is creating new hope and aspirations among the people.

He said when people experience corruption-free governance, it inspires trust among them and they also extend their cooperation to the administration and this is visible in Jammu and Kashmir now-a-days, according to the sources.

Modi said there would be political differences but everyone should work in national interest so that the people of Jammu and Kashmir are benefitted.

He stressed that an atmosphere of safety and security needs to be ensured for all sections of society in Jammu and Kashmir, they said.

This is the first interaction between the central leadership and mainstream parties since August 5, 2019, when the Centre revoked Jammu and Kashmir's special status under Article 370 and bifurcated it into union territories of Jammu and Kashmir and Ladakh.