News
Business
Movies
Sports
Cricket
Get Ahead
Money Tips
Shopping
Sign in  |  Create a Rediffmail account
Rediff.com  » News » Something bigger is afoot than just shifting the LAC a couple of km in Ladakh

The government must figure out what the Chinese game plan is and thwart the endgame before it is upon us, possibly in early winter, advises David Devadas. 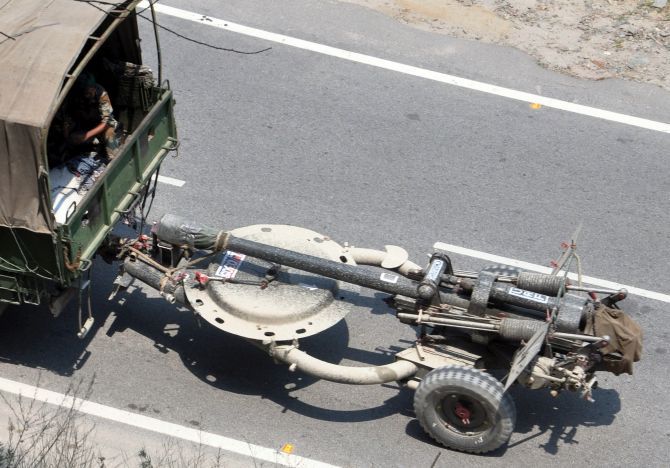 Indian strategists must think several steps ahead of the Chinese if India is to defeat the challenge which is currently in the Ladakh region, but could spread elsewhere. After all, a large number of Chinese troops and armaments are massed in Tibet right along the Indo-China border.

Even within Ladakh, the Chinese intruders have changed the goalposts a couple of times since the beginning of May, when they first turned up in huge numbers.

The pushing and shoving that marked their ingress in early May gave the impression that they were primarily targeting the north bank of the Pangong Tso lake.

The two countries' perceptions of the LAC along that bank have differed for years. So, that seemed like only a more belligerent repeat of past skirmishes.

But the Chinese were also pushing at the boundaries in the Hot Springs and the Galwan area at the same time.

And by mid-June, the Chinese had not only consolidated up to Finger 4 on Pangong Tso, the main action had shifted to the hitherto undisputed boundary in the Galwan Valley.

In the couple of days after the fight at Galwan on the night of June 15, the Chinese apparently consolidated fortifications right at the Line of Actual Control there.

In fact, according to most expert estimates, their new battlements at a major bend of the river are actually on the Indian side of the LAC.

The following week, it turned out that the Chinese had moved forward in the Depsang plain farther north and were approaching a bigger strategic prize -- the highest airfield at Daulat Beg Oldi.

That airfield is very close to the Karakoram Pass on the India-China border -- the established border, not the Line of Actual Control skirting Aksai Chin.

Lieutenant General Rakesh Sharma (retd), a former commander of the Leh-based XIV Corps and currently a Distinguished Fellow at the army's think-tank, holds that the Chinese perhaps want to wrest that corner of Ladakh around DBO from India.

The way General Sharma sees it, having a road through DBO would substantially reduce the distance the Chinese have to travel to connect the main CPEC route, which runs through the Khunjerab Pass.

That may not turn out to be the Chinese intention, unless they want to reorient the road directly east or southeast (via Tibet) to reach the heart of China. Crossing from Aksai Chin to the Xinjiang province would be a long loop.

Plus, "they already have a fabulous highway over the Kunjerab" Pass, as Major General Somnath Jha (retd), a former commander of the brigade that holds Eastern Ladakh, points out.&

The differing viewpoints of the two retired generals, both very intelligent men, illustrate the extent to which the country's strategic community is guessing in the dark about what the Chinese actually want.

For the moment, India's strategists seem to be at sea, perhaps more so within government than among retired officers. The established narrative so far is that the Chinese are engaged in what General Bipin Rawat, the chief of defence staff, called 'salami slicing' when he headed the army.

That view may be missing the wood for the trees. For, there are tell-tale signs that something bigger is afoot than just shifting the LAC a couple of kilometres in Ladakh.

Sadly, the array of Indian intelligence agencies seem to have been caught napping. As General Sharma points out with a tone of disbelief, two divisions of the People's Liberation Army just turned up in Aksai Chin in May.

"We used to say it will take them two months to cross to it," General Sharma observes, "But two whole divisions just appeared there."

It seems that the range of intelligence paraphernalia and agencies did not have advance warning nor even spotted them when they were physically moving in.

As it happened, even the normal springtime deployment of the Indian Army was not in place at the edges of Aksai Chin when that happened. Apparently, those who are paid to apply their minds to tactical possibilities prioritised covid-related restrictions.

They evidently did not think the strident Chinese opposition, at the United Nations Security Council and elsewhere, following the Constitutional changes with regard to the erstwhile state of Jammu and Kashmir last August, might possibly lead to coercive action on the ground.

It is futile to cry over split milk, but the government needs to ensure that the intelligence apparatus pulls its act together at least now.

A top priority should be to figure out what the Chinese game plan is and to get ready to thwart the endgame before it is upon us, possibly in early winter.

This requires insightful analysis as well as the various kinds of information gathering resources at the government's disposal.

For, given the shifting Chinese goalposts, Indian strategists need to think several steps ahead of what is obvious on the ground.

Heavy deployment ought already to have been organised in the Depsang area while the Galwan operation was being planned.

It is possible that Demchok further south and other sectors of the long boundary between the two countries could be the next targets.

I have warned at security-related conferences for more than three years now that India should keep in mind the lessons of the 1965 War, when Pakistan intruded in Kutch to draw Indian forces to the other end of the India-Pakistan border before they went for their real objective -- Jammu and Kashmir.