'No aeroplane in the world has been designed to switch off its engines above 14,500 feet.'
'Thanks to a lot of practice, we were able to execute a flawless landing at DBO at 0615 hours on 31st May, creating history.' 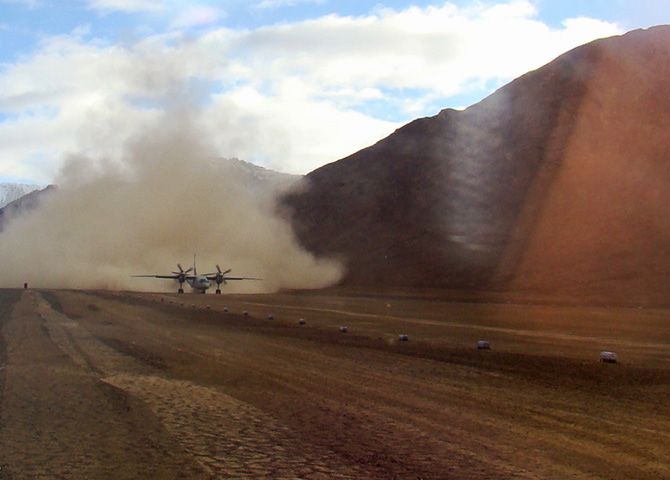 IMAGE: An Indian Air Force An-32 takes off from the Daulat Beg Oldi airfield.

There was a frenzy of activity in the squadron in the next few days.

Numerous trips to Daulat Beg Oldi had to be planned by helicopter while the troops at DBO went about preparing the airstrip.

The liaison between the Indian Army and the Indian Air Force and the Indo Tibetan Border Police was at its highest at that time, remembers Air Marshal Pranab Kumar Barbora.

Air Vice Marshal Suryakant Chafekar -- then a group captain -- recalls he had the full and unflinching support of the youngsters in his unit.

While some IAF officers involved themselves in the operational planning, the others planned for contingencies, administrative support, photography, media and other matters which were all part of the mission accomplishment. 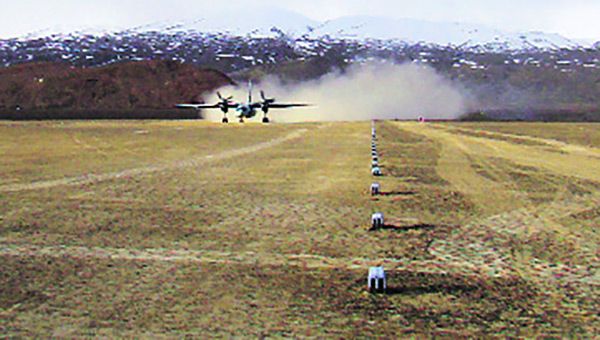 IMAGE: The white centre line had to be marked with chuna(lime). The distance to go markers on the runway's edge were created by painting old jerry-cans white and inserting them along the runway at equal distances.

The ITBP and the army on their part went ahead full steam to get the landing strip ready in time.

With little or no mechanical equipment available, the troops had to often use bare hands and locally created tools to get the airstrip in shape.

The white centre line had to be marked with chuna (lime), the distance to go markers on the runway's edge were created by painting old jerry-cans white and inserting them along the runway at equal distances.

"That too at a high rate of descent, above the minimum braking speeds, on a narrow runway barely the width of the wings, with a small landing roll available and no margin for error," recalls AVM Chafekar.

Landing at such high speeds, that too on a kutcha mud packed runway was sure to add stress on the aircraft's tyres and the landing gear.

One small error in braking would lead to bursting/deflation of the tyres and then a mountain of maintenance issues would crop up.

"No aeroplane in the world has been designed to switch off its engines above 14,500 feet," says AVM Chafekar.

"If such a switch off became inevitable, we did not have the expertise or knowhow to start the aeroplane at that altitude, the mission would be a failure even if the landing was executed," says the IAF veteran.

Moreover, handling the aircraft at that altitude and inside the bowl of the airfield has its own problems explains the mission leader.

"Once we descend to about 800 to 900 feet above the valley floor, we are committed to land in case we lose an engine. The aeroplane has to be literally coaxed into landing at such high speeds, otherwise she will just float, eating up valuable landing distance," AVM Chafekar points out. 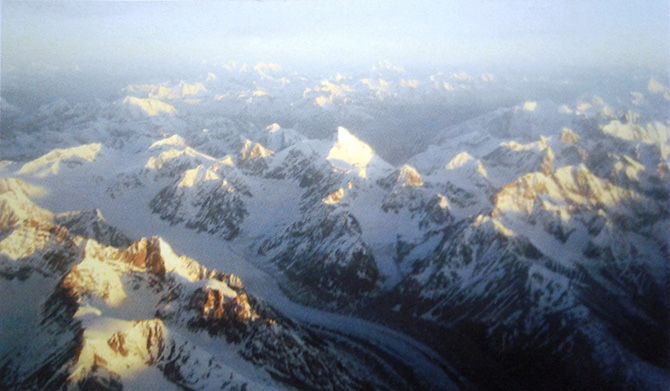 Prior to this, a number of circling approaches were carried out over Daulat Beg Oldi in routine supply drop missions to practise for the final day.

The Chinese chatter on the radio increased once the People's Liberation Army saw that the aeroplane was descending to lower heights, with its undercarriage down giving away its intention.

While this happened, it was decided to simulate the same at Chandigarh itself so that the Chinese were not unduly worried.

Then Group Captain Chafekar and his selected crew carried out high speed approaches with an aim to touchdown within 5 slabs of concrete on the runway and thereafter practised slowing down the aircraft in a controlled manner in the shortest possible distance.

"Thanks to a lot of practice, we were able to execute a flawless landing at DBO at 0615 hours on 31st May, creating history of sorts," says AVM Chafekar gleefully.

The aircraft with the best performing engines was chosen and then to lower its weight further, the cargo compartment was stripped of almost everything.

"We also carried just enough fuel to reach DBO, wait on the ground for 15 minutes and then go to Thoise for refuelling," recalls AVM Chafekar. 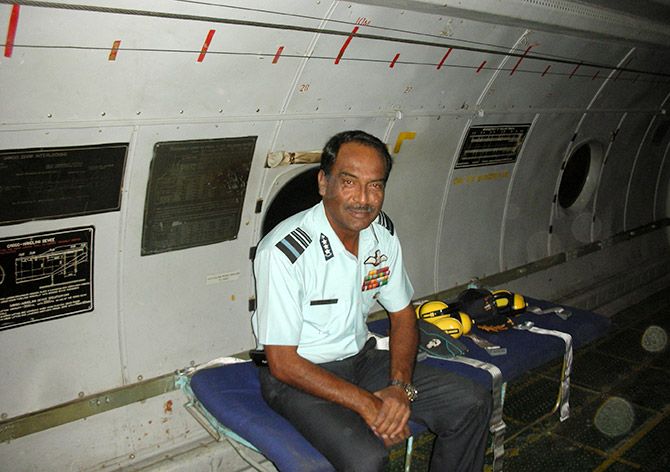 In the highest traditions of the armed forces, and displaying extremely high quality of leadership, Air Marshal Barbora was the only passenger on board. The then Commander in Chief, Western Air Command wanted to be with his boys whilst they executed the extremely dangerous mission.

The aircraft rolled down the brown earth strip leaving a cloud of dust behind in its landing roll and then Group Captain Chafekar brought it to a halt at the turning pad.

There were loud cheers from the Indian Army officers and soldiers, including Lieutenant General Prabodh Chandra Bhardwaj, then the Northern Army Commander, and ITBP officers and men.

Then Group Captain Chafekar looked around for the ITBP trooper he had met a few months earlier.

There he was, as briefed, standing and waving out to him from the suggested vantage point.

"He was smiling ear to ear as if he had executed the landing!" remembers AVM Chafekar. "It was the best gift I could get for a mission well accomplished."

His smile said it all as he received his share of the mithai from the mission leader himself.

In the days that followed, many such trips to Daulat Beg Oldi were flown and more pilots were made proficient to land the aircraft.

"The ground personnel at DBO became very efficient at offloading," remembers AVM Chafekar, who was awarded the Shaurya Chakra for his feat.

"In their heavy special clothing which made even walking difficult, they were capable of offloading 4 tons of load in under 20 minutes in sub zero temperatures, with the aircraft engines spewing sand and smoke into their faces," he recalls.

"I have the highest regard for the Indian Army who live and operate 24/7/365 in such inhospitable places, guarding our country, come what may!" exclaims the IAF veteran.

"Sir," I ask AVM Chafekar, "what is so important about DBO that we had to risk life and limb to land here after 43 years?"

"DBO is the confluence of five borders, or rather five cultures," says the pilot who made history at the world's highest airfield. "We have influence of the Persian, Arabic, Chinese, Indian and Central Asian cultures here and logically, why won't all of these people not want to be here?"

"Isn't this airfield an ideal place for troop induction in case of a contingency? Even if we drop troops at Leh or Thoise, they would have to undertake an arduous journey of 10 to 15 days to reach here," AVM Chafekar points out.

"Very often, troops deployed here fall prey to 'Hypo' and have to be evacuated to lower altitudes. By landing here, we are giving a tremendous boost to the morale and motivation of the troops," he explains, "and also adding to the operational efficiency of our armed forces."

Having flown aeroplanes and operated alongside them for 35 plus years, I can well understand the history created that day, May 31, 2008.

Military pilots are surely a special breed; they can accomplish the impossible with elan.

Air Commodore Nitin Sathe (retd) is a helicopter pilot who served the Indian Air Force for 35 years and was part of United Nations Peace Keeping Force operations in the Congo. 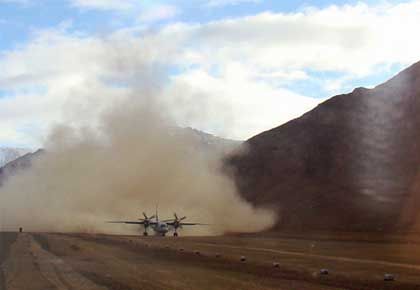 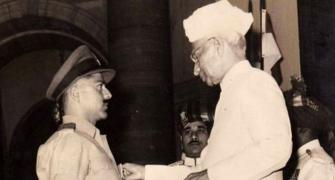 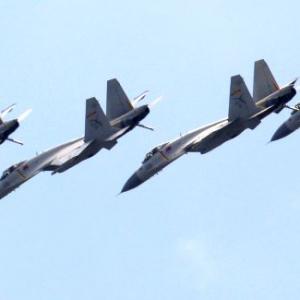 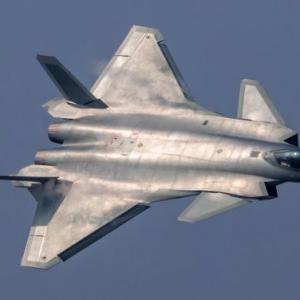