'To deny our people help in the time of their greatest need is cruelty,' says Aakar Patel, winner of the 2018 Prem Bhatia Award for Political Reporting. 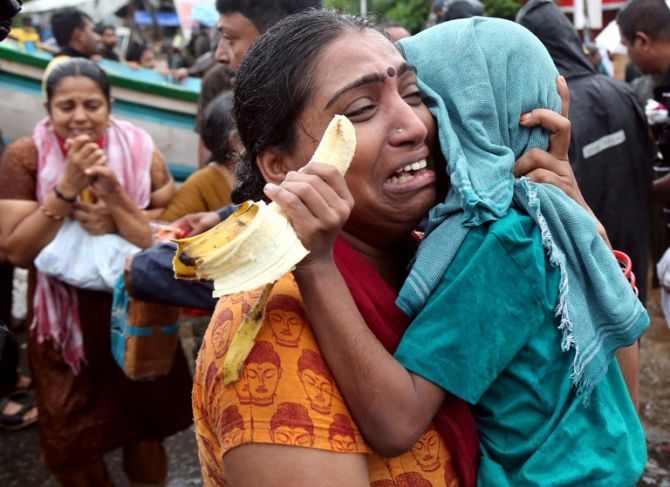 IMAGE: A woman weeps as she holds her son after they were evacuated from a flooded area in Aluva. Photograph: Sivaram V/Reuters

There is controversy over whether or not India should accept foreign aid during a disaster.

There is even confusion about what the official policy is and it is an important enough issue to be examined so let's have a look at it.

The Kerala government says it needs Rs 2,600 crore (Rs 26 billion) in aid to counter the effects of the recent flooding that killed hundreds of people and severely damaged the state's infrastructure and private property.

The Kerala government says the United Arab Emirates (which includes Dubai, Abu Dhabi and Sharjah) has offered Rs 700 crore (Rs 7 billion) which the government in Delhi said it would not accept.

The policy of the earlier Manmohan Singh government on this was cited as the reason for the refusal.

Perhaps under pressure from Delhi, the UAE government now says that no specific aid was offered. However, the Thailand ambassador to India has himself written that Delhi is refusing foreign assistance.

His exact words are: 'Informally informed with regret that the Government of India is not accepting overseas donations for Kerala flood relief. Our hearts are with you, the people of Bharat.'

Prime Minister Narendra Damodardas Modi on August 18 after speaking to Dubai's ruler tweeted: 'A big thanks to Sheikh Mohammad for his gracious offer to support people of Kerala during this difficult time. His concern reflects the special ties between governments and people of India and UAE.'

This indicates that the offer was indeed made, and that it was refused.

The Manmohan Singh government had intervened in this in 2004. Till that year, India accepted aid from foreign nations.

After the tsunami in 2004, it was decided that India would not accept relief and rescue assistance from foreign nations, but it would accept aid for rehabilitation.

Relief and rescue has to do with the immediate help that is required. This includes the teams of people on the ground who are helping those affected and are the people in first contact with the victims.

What could be the reason for saying that no foreign assistance on this would be accepted? It could be several things.

For example, it is the local authority that is familiar with the area and outsiders would be coming into a disaster zone with no knowledge of it or the local language.

The second reason could be that in these matters, the Indian State is already reasonably strong and linked through a permanent bureaucracy.

It also has a large military and paramilitary force that is often deployed for civilian duty (as it was in Kerala).

The third reason could be that visually it is problematic to have foreigners rescue Indians and it dents national pride. The same concern does not hold for long term rehabilitation, which is faceless.

There could be other reasons for why Manmohan Singh and his team decided this, but they are not mentioned in the National Policy on Disaster Management.

My view is that if the concern was the first and the second, it seems reasonable. However, if the UPA strongly felt that the third reason, national pride, was the determining factor, then it is problematic.

Now let us look at the refusal even of rehabilitation, which is what is indicated by India's refusal to accept the UAE's and Thailand's offer.

The possible reasons one can think of for doing this are as follows:

First, that we don't need their money. That we have enough resources in India to take care of our citizens in the long term when they are affected.

Second, that we do not want to take money from some specific countries (for example, China and Pakistan) and because of this we cannot take it from anyone, to be consistent.

Third, again, that taking assistance dents the national honour and it in some way diminishes the way we are seen by the outside world because we are aid-takers and not aid-givers.

Again, here there might exist other reasons that we are not aware of, but the government has not told us what they are.

To me, the first reason is obviously false. We are a poor country, by any definition. To pretend we are not is to be blind to what is around us.

To me, the second and third are again problematic. It should be the person and the community that is affected by disaster that should determine whether their honour is dented in accepting assistance.

An individual has feelings, not a nation.

There is no real thing as national pride. It is imaginary, while the aid and assistance is real.

The Kerala government says the UAE is not any ordinary place and cannot be seen as just a foreign place. It is a country which Indians, particularly Malayalis have helped build with their hands. They have a strong stake in it and any aid from that country cannot be seen as charity alone.

It is difficult to disagree with this. Even if Manmohan Singh had a different policy, there is no reason for us to not see the flaws in it and correct it.

To deny our people help in the time of their greatest need is cruelty.