Had the slain Indian-American engineer stayed in India, he would have earned less but his life might have been spared, Sunanda K Datta-Ray says, pondering the question of where one belongs. IMAGE: At a vigil for Srinivas Kuchibhotla, who was killed in Kansas by a white American man. Photograph: David Ryder/Reuters.

The question is implicit in his widow's challenging question, "Do we belong?"

The answer remains elusive because of the hypocrisy that cloaks attitudes on both sides on a matter that touches closely on sensitive areas like loyalty, identity, national pride and, yes, also human greed.

Undoubtedly, many in Donald Trump's administration must resent the phenomenon that the 32-year-old aviation engineer represented.

The president's chief strategist, Stephen K Bannon, for instance, once reportedly deplored that "two-thirds or three-quarters of the CEOs in Silicon Valley are from South Asia or from Asia". As it happens, the charge was untrue.

Even when a disproportionate number of Asians are hired, they are hugely under-represented in upper management. Yet, the myth of a model minority cheating native-born white Americans of their birthright persists with damaging effect.

It's like the crock of gold at the end of the rainbow tempting more and more gifted young Indians to seek a livelihood in the US instead of using their talents to help shape India's future. India trains them -- especially graduates of the Indian Institutes of Technology -- in science, technology, engineering and mathematics at immense public cost.

It's not widely known that the IITs were the brainchild of a visionary Bengali businessman, Nalini Ranjan Sarkar, who enriched himself through land development, insurance initiatives and business ventures. He then tried to do the same for his country by laying the foundations of an entrepreneurial class to manage the industrialisation that was expected from Jawaharlal Nehru's five-year plans.

Thanks to our sluggish development, it's the US that benefits most not only from Sarkar's IITs, but from the entire edifice of higher education that poverty-stricken India set up with painstaking care and at great expense.

Bannon's unfair and untrue comment also showed that Indian success is a further red rag to the bull of American envy.

He represents what is called the "alt-right" -- the new extreme right -- in American politics. As chief executive of Breitbart News, Bannon was accused of promoting racist, anti-Muslim, anti-immigrant and white supremacist ideas.

His disquiet at the notion of Asians climbing to top positions in Silicon Valley was evident in an interview with Trump in November 2015. While Trump thought foreign-born Ivy league graduates should be allowed to stay on in the US where they could be "job creators", Bannon hummed and hawed to make his infamous comment about Asian CEOs and argue that the US was "more than an economy". It was "a civic society".

There's no denying that white Americans have cause for envy.

A century ago, Asian Americans (mainly Japanese and Chinese) were digging ditches, laundering clothes and hewing minerals under the ground.

Japanese Americans were interned during World War II. After the Chinese were massacred in Los Angeles in 1871, Congress legislated to forbid low-skilled Chinese immigrants.

But nearly all Asian immigration was banned by 1924.

Hawaii's legendary Gobindram J Watumull, who landed in 1917, couldn't acquire citizenship until the Oriental Immigration Act was revised in 1949. Congressman Dalip Singh Saund, who flew to Calcutta in December 1957 -- his first visit to India in 38 years -- was probably the first and most outstanding symbol of success.

From these humble beginnings, Indian Americans have risen to out-earn everyone since at least the 1960s. By 2014 their incomes were 20 per cent higher than the average white household's.

It wasn't until 1965, however, that explicit national discrimination was abolished only because an economy that the Vietnam War had galvanised desperately needed scientists and engineers.

By 1999 a handful of Indian Americans accounted for 5 per cent of US wealth.

Americans like to think that these Indians landed very disadvantaged and wound up advantaged through extraordinary investments in their children's education. That is not so. Unlike emigrants to Britain, those who chose the US were usually highly educated to start with. They were the best of Indian talent whose migration is a sad blow for India's future.

Had Kuchibhotla stayed at home, he would have earned less but his life might have been spared to serve his country.

Nor would there be any confusion about where he belonged. He would have been India's future. 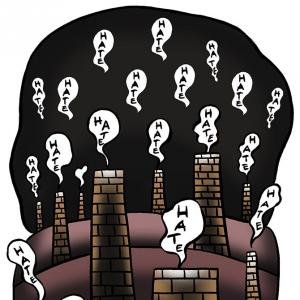