Amid attacks on Indian-origin people in the United States, an anti-immigration website has caused alarm among the community after featuring a video showing a man secretly filming Indian families at an Ohio park and commenting that the "Indian crowd" has "ravished the Mid-west". The 2:49 minute video is titled 'Welcome to Columbus Ohio Suburbs -- Let's Take a Walk to Indian Park' and according to BuzzFeed News it has been created by 66-year-old computer programmer from Virginia named Steve Pushor.

"The Indian crowd has ravished the Midwest. It's crazy. I ask this question -- what happened to all the American people that used to live in this middle, upper-middle class neighbourhood. Where does all this money come from," the man remarks as he walks through the park secretly filming the video.

Young children are seen running around and playing on the swings while their parents and guardians watch on.

"I'm not saying it's bad or good. I'm worried about the people that had jobs and worked here," the man says in the video.

As he records the video showing some men playing volleyball, Pushor comments that till last year the Indian crowd was playing cricket and they have now turned to volleyball, migrating "towards the American way of life".

As he pans his camera across the unsuspecting crowd, he remarks that the number of people from foreign countries "blows my mind out here".

"This is an amazing number of jobs that have been taken away, more than last year or year before. It's crazy inanity," he comments, as he shows young children running around the park, playing on the swings and women standing and talking.

He also remarks that he can "get away" with taking the video instead of taking pictures.

Pushor comments on the "traditional outfits" that the Indian women are wearing, saying it is "phenomenally mind blowing".

Pushor told BuzzFeed News that he is trying to point out that "people in Ohio, IT workers and other professional people, have lost their jobs to foreign guest workers. That's what our point is."

The report said Pushor had initially posted the video in August and it has re-surfaced again recently.

The website says its mission is to "save American IT jobs for future generations" and has sections like 'Indian IT Mafia' and posts on 'I lost my job to H1B' and 'the perpetuated H1B scam that is hurting USA IT workers and abusing H1B Indians'.

Concerns over safety have risen among the Indian community in the US following the hate crime shooting of Indian engineer Srinivas Kuchibhotla in Kansas last month.

Kuchibhotla was killed when 51-year-old US Navy veteran Adam Purinton opened fire at him and his friend Alok Madasani, yelling, "get out of my country".

Last week, Indian-origin convenience store owner Harnish Patel, 43, of Lancaster in South Carolina was found dead of gun shot wounds in his yard. However, police said in Patel's killing his Indian ethnicity does not appear to be a factor.

In another troubling incident, a Sikh man named Deep Rai working outside his home in Kent, Washington, was shot in the arm by a stranger who allegedly shouted "get out of my country" before pulling the trigger.

The video, where Pushor is stalking and secretly filming unsuspecting families, has been seen as disturbing and has raised more concerns in the community.

Bhavin Bavalia, an American-born IT professional and the son of Indian immigrants, was quoted as saying, "It's very scary for me knowing that I have a lot of family in these small Indian communities."

"To think that there could be some weirdo filming my cousin's kids as they're playing at the park, and possibly fomenting resentment towards them, is just disturbing," he said.

Kaplesh Kapadia, the Indian-born CEO of a California startup called SelfScore, said Pushor's website was the subject of discussion this week in at least five different Whatsapp groups.

"This is spooking people, combined with the Kansas murder," he was quoted as saying.

Image: A YouTube screengrab of the video titled 'Ohio Suburban Park is Occupied by Indians'

Too many Indians... that is Joel Stein's problem 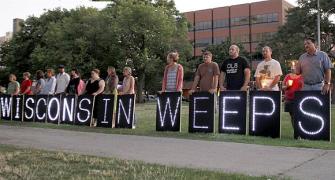