Nations hold parleys all the time. So why is this meeting significant?

For one, it is a follow-up to parleys held in Myanmar capital Naypyidaw in January.

But more importantly, the Myanmar delegation is travelling to Tawang in western Arunachal Pradesh, an area described by China as South Tibet and claimed as its own. It may just be tokenism but by taking the Myanmarese, considered China's close ally, to Tawang, New Delhi is sending a subtle message to Beijing that no matter what it says, Arunachal Pradesh, especially Tawang, is non-negotiable.

That symbolism apart, the joint secretary-level meeting between the home ministry and Myanmar's interior ministry is a step forward in the new-found bonhomie between the two nations who share a 1643-km boundary, largely un-demarcated and unmanned.

So why is Myanmar important for India?

By engaging with Myanmar's military rulers, New Delhi wants to ensure that its strategic as well as tactical interests on the eastern flank are protected.

In tactical terms, India wants Myanmar to help in cracking down on insurgent groups taking shelter in the adjoining jungles. The other worry that New Delhi has is the ease with which narcotics and arms smuggling from Myanmar into India's north-east takes place.

It's a tall order, no doubt, especially the task of countering China's influence in Myanmar. But over the past decade, India has at least managed to sustain a policy of engagement if not overt friendship with the hardliner military rulers in Myanmar. New Delhi is now moving into a new phase of closer cooperation. The talks currently on in Tawang are just one step in that direction.

After these negotiations, measures to prevent narcotics and arms smuggling are likely to be stepped up. In the 1990s and in the first decade of this century, most of the weapons were sourced from black market operators in China's south-western Yunnan province. The arms were produced by Chinese State-owned weapons factories, but they are reported to have been trafficked by unscrupulous factory managers.

A Jane's Intelligence Review report in 2008, however, felt that a plausible source for these weapons could be the United Wa State Army. The group has acted as a broker for Chinese-produced arms as well as selling weapons from its own arms factory near Panghsang on the China border.

Whatever the source, the fact is Indian insurgent groups, notably the two factions of the National Socialist Council of Nagaland, Meitei groups like the United National Liberation Front and People's Liberation Army (not to be confused with its Chinese namesake), and the United Liberation Front of Asom have been heavily dependent on these arms. Now with Myanmar coming on board, New Delhi is hoping that the Myanmarese army will agree to carry out coordinated operations with the Indian army against insurgent camps along their mutual border.

One big target in these operations would be Ulfa's commander-in-chief Paresh Baruah, who is believed to be hiding somewhere along the Myanmar-China border in the country's north-eastern areas. The crackdown -- whenever it happens -- will come as a big blow to these insurgent groups, especially those from Manipur and Assam since they have already lost out sanctuaries in Bangladesh following the decision of the Awami League government to cooperate with India. In November 2009, Ulfa's chairman, head of the political wing Arabinda Rajkhowa and Baruah's deputy, Raju Baruah, were arrested and handed over to India by the Bangladesh authorities. Many bank accounts operated by the Ulfa in Bangladesh were also frozen.

Six years earlier, Bhutan had acted in a decisive manner to oust the Ulfa from its territory, forcing the group to shift its remaining cadres and weapons to Bangladesh. Now, if Myanmar keeps its promise, the remaining hardline cadres would be under tremendous pressure to surrender. Many of them are currently stationed in camps located along the Myanmar-Arunachal border. The Nagas and the Meiteis, on the other hand, have joint sanctuaries in north Myanmar.

Given the renewed warmth between the military rulers in Myanmar and New Delhi, the coordinated action looks promising.

In return, India is likely to step up its military aid to Myanmar and also shield the military junta from international criticism of its human rights and civil liberties record.

With elections due in Myanmar later this year, the military dictators would look for support from India to legitimise its hold over the government. The junta's decision to bar Nobel Laureate Aung San Suu Kyi's supporters from contesting the upcoming polls will ensure that Myanmar will be ruled by the military in the foreseeable future.

At a larger strategic level, however, India will have to do much more to make its presence felt in Myanmar which has increasingly tilted towards China in the past two decades. That New Delhi has been late in realising the dangers of Beijing making inroads in the Indian subcontinent is a well-known fact. What is not generally recognised, however, is India's silent efforts to woo the junta in Myanmar and the gains New Delhi has made in the past half a decade.

All that help is now bearing fruit, with a mechanism for intelligence-sharing, border liaison cells and regular high-level meetings put in place between India and Myanmar over the past six months.

The four-day meeting happening in India's north-east this week is thus a step in the right direction, although there is a long way to go before India can exert even half the influence that the Chinese wield over Myanmar's military rulers. 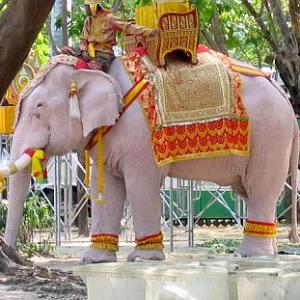