News
Business
Movies
Sports
Cricket
Get Ahead
Money Tips
Shopping
Sign in  |  Create a Rediffmail account
Rediff.com  » News » How can we take on the Chinese with our defence budget?

How can we take on the Chinese with our defence budget?

Among the handful of countries with large defence budgets and armed forces, India is matched only by Saudi Arabia in the level of its import dependence.
For revenge to be served cold, go beyond import bans and correct these long-term failures -- if we're up to it, notes T N Ninan. 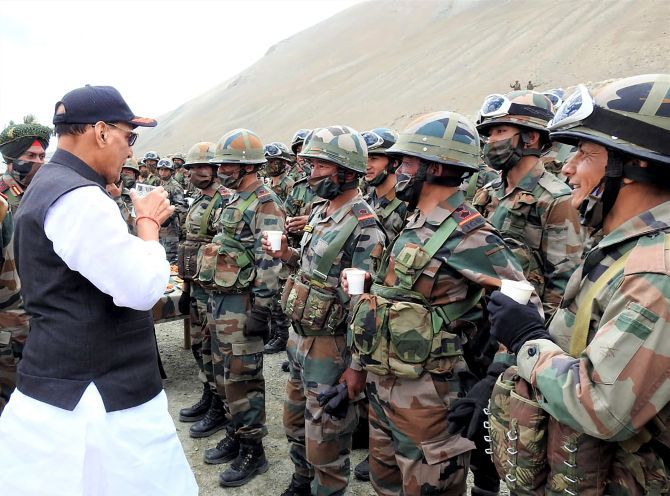 Is Narendra Damodardas Modi to blame for blinking first in the confrontation with China along the de facto border in Ladakh, and allowing China to score some territorial points?

In the immediate context, no, because despite all the improvements in border infrastructure and in the capabilities of the armed forces, India does not have the capacity to forcibly remove entrenched Chinese troops from positions that they have occupied in strength.

Once the army allowed China to gain ingress, and to support its frontline troops with artillery and armoured vehicles, possession became nine-tenths of the law.

Whether the damage was done because of intelligence failures or because Indian forces in the area were not alert, there was little that a prime minister could do, post facto, except settle for an unequal quid pro quo.

Repeating Nehru's order to 'throw the Chinese out' would only have invited more trouble from a more powerful foe.

Mr Modi has therefore been realistic about the facts on the ground, and chosen discretion over valour while resolving (hopefully) that India will prepare to fight another day.

The real problem is that such resolve has been largely missing -- in Mr Modi and in his predecessors.

Defence budgets have been cut to the bone.

The fact that Mr Modi's two finance ministers to date have been defence minister also has made little difference.

The army has itself gone on record to say that its equipment is mostly out of date.

The navy has commissioned fewer than 20 frontline combat ships and submarines in the last decade -- a rate at which it will never get to its projected size.

As for battles in the air, China has better air defence, missiles with greater range, better radar, and aircraft with better stealth capabilities.

It is hard to make up for all this when your economy is only a fifth of China's, but the imbalance could have been rendered less extreme and the weapons acquisition programme more purposeful.

It is surely telling that, even with Pakistan, whose economy is only one-ninth of India's in size, India's offensive capabilities are limited -- as became evident after the Pakistani provocations in both 2008 and 2001.

In the post-Pulwama tit-for-tat last year, it was India that lost an aircraft though Pakistan has a comparatively tiny budget for its air force.

Still, the resource constraint is real and cannot be wished away.

India needs to spend more on defence, but also on health and education.

Its physical infrastructure (essentially transport and communications) needs to be radically upgraded.

But money could have been spent more wisely, instead of worsening the teeth-to-tail ratio by increasing pensions across the board, as Mr Modi did early in his first term. Defence capabilities cannot be built overnight; the task takes years if not decades.

Even in 1971, despite General Sam Manekshaw's reported quip to Indira Gandhi, that he was 'always ready', the fact is that India needed nine months to prepare for war by hastily importing second-hand tanks and other military hardware from places like East Europe.

In 1962, Nehru wrote in panic to then US president John F Kennedy, asking for whole squadrons of aircraft.

In his first year in office, Mr Modi promised to increase the share of indigenous defence equipment in total supplies from 40 per cent to 70 per cent.

That has not happened, but there is fresh talk of self-reliance.

Manohar Parrikar as defence minister said he would improve the percentage of serviceable Sukhois from about 50 per cent of the fleet to 75 per cent; reports are that there has been some improvement, but not near the promised level.

Private shipyards and manufacturers were offered a piece of the action, but a competent yard with a record of delivering within time and budget waits for orders while an improvident one gets them.

So the navy waits.

Among the handful of countries with large defence budgets and armed forces, India is matched only by Saudi Arabia in the level of its import dependence.

For revenge to be served cold, go beyond import bans and correct these long-term failures -- if we're up to it.