'China has forcibly occupied territory it had never occupied before, blocked Indian patrols' access to areas they had patrolled for decades and, most provocatively, killed 20 Indian soldiers.'
'Most countries would regard these as acts of war.'
'New Delhi has apparently taken off the table the option of evicting the PLA with force,' observes Ajai Shukla.

They were commemorating the sacrifice of over 500 Indian soldiers who laid down their lives in the summer of 1999 while successfully throwing back Pakistani soldiers who had crossed the Line of Control and illegally occupied dominating heights in the Kargil sector.

'Indian armed forces' victory in Kargil on July 26, 1999, is a saga of strong political, military and diplomatic actions,' stated the ministry of defence on Sunday.

Ironically, even as the government underlined its predecessor's strong actions in 1999, including the almost immediate decision to use armed force, there are no signs of similar action against soldiers from China's People's Liberation Army, which continues to occupy Indian claimed territory in Eastern Ladakh.

True, there are differences between the Pakistani intrusions of 1999 and China's intrusions today.

In 1972, India and Pakistan had delineated the LoC on a map, so infringements are evident. Meanwhile, the LAC remains contested.

Yet, China has clearly changed the status quo.

It has forcibly occupied territory it had never occupied before, blocked Indian patrols' access to areas they had patrolled for decades and, most provocatively, killed 20 Indian soldiers while they were verifying a promised withdrawal.

Most countries would regard these as acts of war.

Meanwhile, there are also marked similarities between the 1999 and 2020 intrusions, such as the fact that both took place due to Indian intelligence failures.

In the early winter of 1998, the Intelligence Bureau warned the government about Pakistani intrusions into the Kargil sector.

In December 1998, Ajit Kumar Doval, then additional director of the IB and today the national security advisor, formally wrote to the prime minister's office revealing that Pakistani irregulars, had crossed the LoC and occupied the heights above Kargil.

Neither the government nor the military paid attention.

Similarly, in the lead-up to the current crisis, Indian intelligence agencies explicitly warned on April 19 about a PLA build-up close to the LAC.

The Indian Army was provided this intelligence, but downplayed it and was taken by surprise when the Chinese wheeled across the LAC into Indian territory.

Unlike in 1999, when the use of military force was almost reflexive, this time the government's strategy involves a combination of containment and dialogue.

Containment involves deploying Indian troops at the PLA's intrusion points, all through the coming winter if needed, in order to block further PLA ingress and force the Chinese to remain too, or to lose their gains.

The second part of the strategy involves dialogue at multiple levels to reach a face-saving solution.

Talks have already taken place at the political-diplomatic level on July 5 between the two countries' Special Representatives -- NSA Doval and China's State Councillor and Foreign Minister Wang Yi -- and on June 17 between Foreign Minister S Jaishankar and Wang Yi.

In addition, the Working Mechanism has been convened several times and is slated to meet again on Friday, July 31, while the senior military commanders, who have met four times, most recently on July 14, might meet again for the fifth time later this week.

New Delhi has apparently taken off the table the option of evicting the PLA intruders with military force.

With an estimated 5 to 6 PLA brigades built up within striking distance of the LAC, there is apprehension that use of force by India could escalate the situation uncontrollably.

While Rajnath Singh warned on July 17 that India would respond with force to 'attempts to hurt India's self-esteem', the Northern Army Commander, Lieutenant General Yogesh Kumar Joshi, was more conciliatory on Saturday.

'We shall continue all efforts to restore the status quo ante along the LAC,' he said.

Meanwhile, the status quo ante remains to be achieved in all of the PLA's five intrusion points.

In the Galwan River Valley, PLA and Indian troops have both pulled back, but the terms of disengagement have shifted the LAC by one kilometre, to China's benefit.

The LAC, which ran through PP-14, now effectively runs through the Y-Nullah Junction.

Troops have also disengaged partially in the Hot Spring-Gogra area.

Many of the 1,000 PLA soldiers that were three-four kilometres on the Indian side of the LAC at PP-15 have disengaged, but some remain a kilometre inside Indian territory.

At PP-17A too, many of the 1,500 Chinese soldiers who had intruded across the LAC have now withdrawn, but several hundred still remain in the vicinity of Gogra Post.

In the Pangong Tso lLake north bank, most of the Indian and Chinese soldiers have disengaged from their confrontation at Finger 4.

However, Indian troops are now more than 10 kilometres from Finger 8, which was the effective LAC till April, and which Indian patrols visited regularly.

Meanwhile, the PLA is refusing to even discuss intrusions in the Depsang sector, where several thousand Chinese soldiers are 15-18 kilometres inside Indian territory.

By blocking a choke-point called Bottleneck, they are preventing Indian patrols from reaching five of their traditional Patrolling Points: PP-10, 11, 11A, 12 and 13. 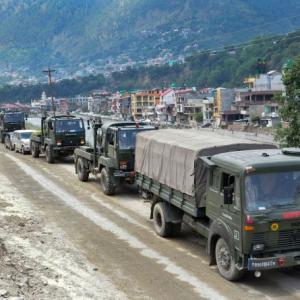 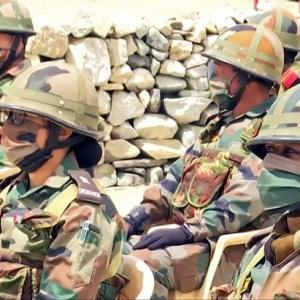