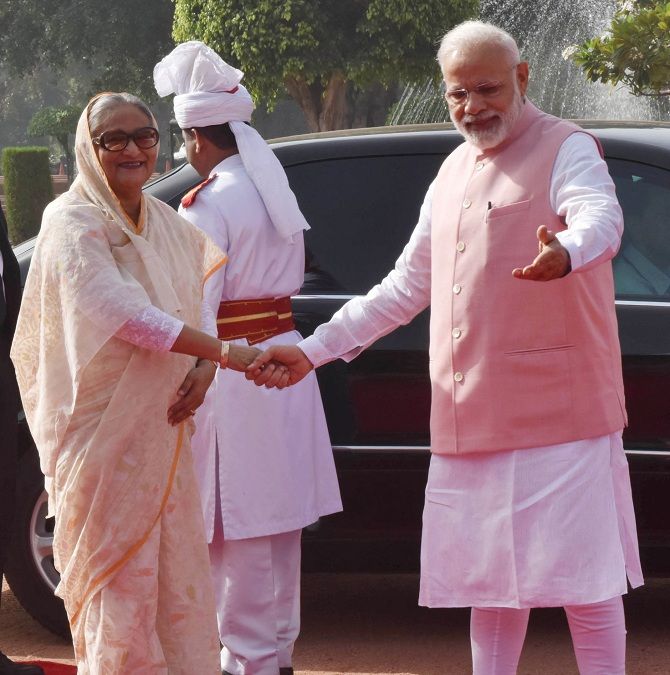 IMAGE: Prime Minister Narendra Modi drove down to the airport to receive Bangladesh PM Sheikh Hasina -- a rare deviation from protocol. 'And if there is but one PM who deserves such exceptions, surely it's Hasina like none else,' says Brigadier Chatterji. Photograph: Press Information Bureau

India did more than just spread the red carpet for Sheikh Hasina, the prime minister of Bangladesh when she arrived in New Delhi on April 7.

Prime Minister Narendra Modi drove down to the airport to log a rare deviation from protocol. And if there is but one PM who deserves such exceptions, surely it's Hasina like none else.

The uptick in the relationship between the two countries took the steeper graph after Modi visited Bangladesh in 2015, and the process was initiated to ratify the Border Pact of 1974.

Since then, some of the decades-old thorny issues along the borders have been resolved and more and more fresh ground has been covered to maintain a momentum rarely witnessed in India's relationships with other neighbours.

Heads of States are always under pressure when visiting another nation.

The expectations back home are too many, while geo-political constraints exert their pulls. The story was no different when the Bangladesh PM visited India.

For both countries a common external factor that influences their bilateral relation is the Chinese shadow.

For Bangladesh, it's a question of how to do the tight rope walk, shake hands with India warmly while not annoying the Chinese too far.

With the Chinese as its biggest trading partner -- $12 billion annually -- though a strong Indian linkage may be appealing, it's not possible to give trade with China the go by.

For India, it is a question of how to keep the Chinese at bay from the shores of Bangladesh and remain the most relevant linkage for them in geo-political terms.

The domestic pressures that weighed on Hasina would have been the elections to the Jatiyo Sangshad, akin to any national parliament, in 2018.

Vote bank politics are not the reserve of any one country alone, but is common practice in democracies. Khalida will surely draw her over the coals for failing to ink a river water-sharing deal.

For Modi, the domestic pressures were much lesser.

Having just won decisively in the election to the state assemblies, the Opposition at home is in absolute disarray.

The challenge for Modi, beyond warding off the Chinese, was utilising Bangladesh's geographic location to boost business in the north-eastern states in a win-win scenario that has the benefits percolating down to people on either side of the border.

For India, a defence agreement would have been very welcome.

It would also have enhanced the Indian heft across neighbouring geographies. The perspectives of South and South East Asian countries about the visit would have been more buoyant had such an agreement been worked out.

Notwithstanding the fact of a few key result areas for both sides not being adequately served, there is enough reason yet to let the champagne flow.

India signed a concessional line of credit to Bangladesh for $4.5 billion for 17 projects in the infrastructure and power sector.

Another $500 million is for defence equipment. Such a line of credit is definitely the largest such investment by the Indian State.

It would be pertinent to recall that during Chinese President Xi Jinping's visit to Dhaka in October, 2016, the Chinese had extended a $24 billion line of credit.

One of Bangladesh's major priorities is the trade imbalance with India. The two-way trade between India and Bangladesh was at $6.6 billion in 2013-2014. But it was lopsided in terms of ratio of imports and exports.

Indian exports were at $6.1 billion and imports from Bangladesh were at $462 million.

She asked Indians to invest in the special economic zones that Bangladesh is setting up. The 17 projects that will benefit from the line of credit will hopefully initiate a correction.

The 13 business-to-business pacts would also bring in more capital into Bangladesh.

Hasina has also incentivised investment in her country very liberally and Indian industry should take advantage of cheaper labour, excellent terms and better availability of power and other resources once the agreements during the visit are rolled out.

The other area of importance for both countries is security.

Though a security agreement eluded Modi, an MoU was signed on a Defence Cooperation Framework.

Similar MoUs were signed by the National Defence Colleges of both countries.

One of the more important MoUs signed is the one between Energy Efficiency Services Ltd of India and Sustainable and Renewable Energy Development Authority of Bangladesh.

The cooperation in this sector, which received a boost in June 2015, has already led to some forward movement in supply of High Speed Diesel, natural gas, LNG, LPG, trans-boundary pipelines etc.

Counter-terrorism was an important issue on the agenda.

Both countries are agreed on most aspects that could curb terrorism in the region. The joint statement at the end of the visit is quite heartening in this regard.

The Bangladesh government had recently informed India about increased movement of terrorists from Bangladesh of Harkat-ul-Jihadi al-Islami and Jamaat-ul-Mujahideen. Such intelligence sharing will need to be continuously pursued and mechanisms worked out for cross-border flow in a faster timeframe.

The next big issue for India is the problem of illegal migration.

The deportation of illegal Bangladeshi migrants is also a thorny problem.

Details of discussions on such issues have not been made public. Apparently, practical wisdom has possibly led the Indian side to not pursuing every outstanding issue on this occasion.

Overall, the visit has definitely strengthened the bilateral relationship.

The sheer size of Chinese investment limits the choices that Bangladesh can make.

Hasina needs investments to create jobs and keep the economy on a growth path. However, the cultural links of Bangladeshis with Indians runs far deeper and quite offsets the Chinese advantages.

For India, Hasina's anti-terror campaign has definitely given a safer environment in the states bordering Bangladesh. Indians will do good to provide her necessary support for winning the next election and such assistance would include a river water treaty before Bangladesh goes to the polls in 2018.

Of course, Bangladesh has also to realise that as a small nation if she wants to retain strategic freedom, a relationship with India is more apt.

With the Chinese, the path ahead would be: Easily provided credit -- to a nation burdened by debt -- to being a Chinese satellite State.

However, visualising such a fallout and acting on it is difficult with 80 percent of its military equipment being of Chinese origin, already. 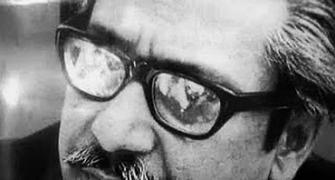 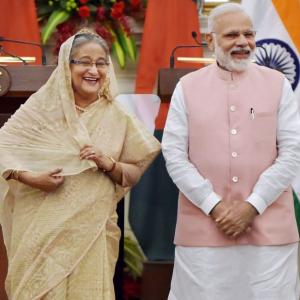 WATCH: Modi, Hasina asked to 'step down' and no one can stop laughing