The interesting aspect of the Chinese spokesperson's remark on J&situation is that there is no direct reference to the specific situation involving the abrogation of Article 370 of the Constitution, points out Ambassador M K Bhadrakumar. 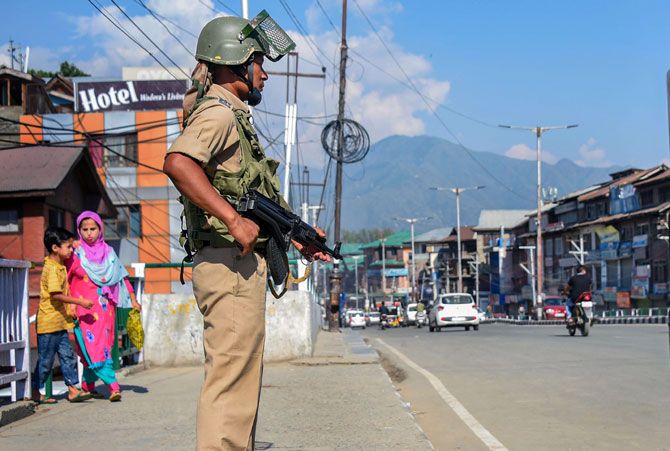 IMAGE: A CRPF jawan stands guard in Srinagar as situation in the Valley continues to be tense and uncertain. Photograph: PTI

In the aftermath of the Modi government's decision to remove 'special status' for J&K and bifurcate the state into two Union territories, the most keenly awaited regional and international reaction -- and a hugely consequential one -- would be that of China's, not the US' or even of the other three P5 member states.

This is for three reasons.

First, China is the only P5 member country that is party to the Kashmir dispute by virtue of its Faustian deal with Pakistan in 1963 -- Sino-Pakistan Frontier Agreement and Sino-Pak Boundary Agreement (external link) -- as well as due to Aksai Chin being a disputed territory.

Second, it is well-known that China has a larger-than-life influence over Pakistan, and therefore, indirectly, is in a position to leverage the next moves by Islamabad on the J&K situation in practical or political terms.

Third, of course, China is a veto-holding P5 member country.

Although not involved in the making of the UN resolutions on Kashmir in 1948-49 (which was an Anglo-American enterprise at a juncture when Nehru somehow deliberately refrained from seeking Soviet help to counter India's isolation in the UN SC), nonetheless, China is a powerful protagonist today if the Kashmir file were to reopen in New York at Pakistan's behest.

On Tuesday, the Chinese reaction to the announcement in Delhi on Monday relating to J&K has come in two parts in the nature of remarks by the foreign ministry spokesperson in Beijing (a relatively low-key reaction in diplomatic terms in comparison with a full-fledged statement, as Turkey, for instance, has done.)

One part exclusively relates to Ladakh's new status as Union territory, while the other one relates to the 'current situation' in J&K.

Both remarks are devoid of any stridency and on the whole India can live with them although western media, unsurprisingly, has hyped them.

In fact, neither voices any overt backing to Pakistan.

And, importantly, there are no new overtones as such in the well-known Chinese stance.

The remark on the change in Ladakh's status (external link) begins by underscoring explicitly that China is voicing its 'firm and consistent position', which 'remains unchanged'.

That is to say, it regards part of Ladakh to be Chinese territory and India should not unilaterally create facts on the ground through domestic laws.

If India does, China will consider that unacceptable and it 'will not come into force.'

The remark rounds off stating the Chinese stance that India should speak and act with prudence on the boundary question, strictly abide by relevant agreements (on peace and tranquility) and avoid precipitate steps.

This is exactly what China has maintained and can be expected to state.

No doubt, this is also what India would expect China to observe in regard of the unresolved border dispute.

The Indian stance on CPEC is a fine example.

The grey area here is whether the administration of Ladakh as UT will entail administrative arrangements on the ground that tread on Chinese sensitivity.

Prima facie, that is unlikely to happen, since the two militaries present in the vacant spaces observe ground rules.

On the other hand, the interesting aspect of the Chinese spokesperson's remark on J&K situation (external link) is that there is no direct reference to the specific situation involving the abrogation of Article 370 of the constitution.

The remark is of a generic nature.

It repeats that the J&K situation is a matter of serious concern, but underscores categorically that 'China's position on the Kashmir issue as such is clear and consistent'.

Most important, it flags that China is in sync with the 'international consensus' that Kashmir issue is a historical conundrum that India and Pakistan have to grapple with by exercising restraint and prudence.

This means, however, that the two countries 'should refrain from taking actions that will unilaterally change the status quo and escalate tensions.'

China calls on the two countries to peacefully resolve their 'relevant disputes' through dialogue and consultation in the interest of regional peace and stability.

Indeed, the 'known unknown' here is to what extent, if any, the current upheaval in Hong Kong influenced Beijing to sidestep the Modi government's specific move to abolish Article 370 and abandon J&K's 'special status'.

To be sure, a grave situation has arisen in Hong Kong, which has assumed anti-China overtones.

No analogy holds good cent percent in politics, but there are similarities in the public alienation in J&K and in Hong Kong which foreign powers are exploiting.

In fact, China also has to contend with its equivalent of our Article 370 -- the Sino-British Joint Declaration (external link), which is as sacrosanct as an international bilateral treaty, signed between China and Britain on December 19, 1984, in Beijing.

Curiously, the Joint Declaration is also legally binding and like Article 370, it commits China to allow Hong Kong to 'enjoy a high degree of autonomy, except for foreign and defence affairs' even as the territory will be 'directly under the authority' of Beijing.

Most important, the Joint Declaration affirms, "The government of the HKSAR [Hong Kong] is responsible for the maintenance of public order.

Military forces sent by the Central People's Government, stationed in HKSAR, for the purpose of defence shall not interfere in the internal affairs in the HKSAR." 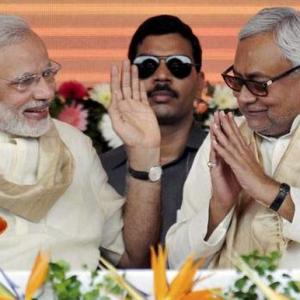