'By causing military humiliation of India it intends to send a signal to other Asian countries to toe the Chinese line,' argues Colonel Anil A Athale (retd). 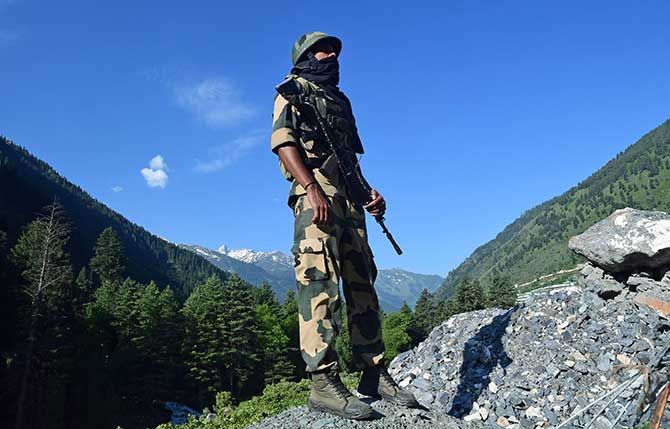 As the co-author of the official history of the 1962 War I briefly took part in track II discussions with China.

The best way to deal with an adversary is to get into his shoes and think like him.

It is only then that one can understand the policy, strategy and tactics one is likely to face in case of shooting war.

Most Indians are perplexed at the Chinese actions and also the timing, just when the whole world was preoccupied with fighting the Covid-19 pandemic.

One thing is clear, while the Galwan clash may well have been a 'local' event and even and accident, the massive mobilisation of the People's Liberation Army at the border was a deliberate move, sanctioned at the highest level.

It is difficult to believe that the PLA could have acted on its own.

The stand-off on the Indian border must also be seen in the context of what China is doing in Hong Kong (tightening its grip and violating international agreement), flexing its muscle in the South China Sea and the East China Sea.

China's aggressive actions may well stem from the fear that once the world comes to grip with the pandemic -- by the year-end or early 2021 -- there will be a severe backlash against China for its handling of the episode including delayed warning, hiding data and secrecy.

Almost every country in the world has paid a price in terms of lives lost to the virus.

This backlash will have terrible economic consequences on the export dependent Chinese economy.

There is a possibility of an isolation of China and call for a 'regime change'.

All this produces a possible threat to the Communist party of China's monopoly of power.

The current aggressive moves are in a way a measure to pre-empt those moves. 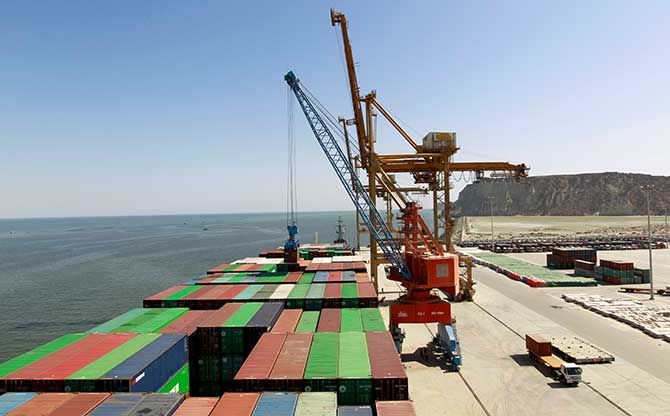 IMAGE: A container is loaded on to the Cosco Wellington, a container ship at China Pakistan Economic Corridor port in Gwadar, Pakistan. Photograph: Caren Firouz/Reuters

Amongst all of China's neighbours, it finds India as the most difficult to browbeat.

By causing military humiliation of India it intends to send a signal to other Asian countries to toe the Chinese line.

China also sees India's actions in Jammu and Kashmir as posing a threat to its China Pakistan Economic Corridor that passes through Gilgit-Hunza areas currently under Pakistani occupation.

India's change of strategy from defensive to offensive against Pakistan in recent years has created this threat that did not manifest till the time that India was on only defensive vis a vis Pakistan.

The unrest in Baluchistan, where Gwadar port is located, is the end point of the CPEC.

This Chinese investment is threatened by the unrest amongst ethnic Baluchis.

China suspects that India is clandestinely supporting the Baluch rebellion via Afghanistan.

Ever since the abolition of Article 370 of the Constitution that granted special status to Jammu and Kashmir, Pakistan has been seething with anger.

Its inability to do anything and lukewarm Chinese support may be straining Sino-Pak relations to a breaking point.

By massing troops on the Ladakh border, China has drawn Indian reserves to that area.

This can help Pakistan launch offensive action in conjunction with an uprising in the Kashmir valley.

This is helped by lack of any political initiative by India in Kashmir to give a healing touch.

The issue of citizenship rights has agitated the Muslim minority in India and there seems to be lack of internal cohesion in India.

India has been improving economic relations with China and taking advantage of the 'peace and tranquility' agreement to reduce emphasis on land forces and diverting resources to building sea power.

On the issue of the South China Sea, India is co-operating with Vietnam, Indonesia, Japan, Australia and the US to checkmate China.

With posing a threat on the land border, China can force India to reverse this trend.

Once the Line of Actual Control becomes a live border like the Line of Control between India and Pakistan, the Indian naval build up will be slowed down, as India has to divert resources to land forces. 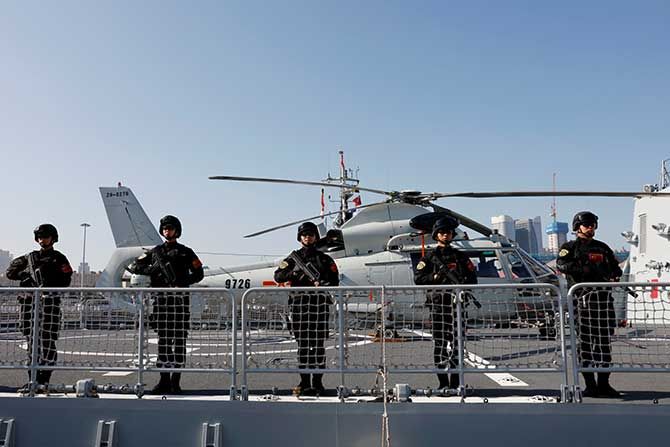 IMAGE: Chinese People's Liberation Army Navy soldiers stand guard on the guided missile destroyer Xining at a port in Qingdao, Shandong province, China, as it departs for an escort mission in the Gulf of Aden and off the Somali coast. Photograph: Stringer/China Out/Reuters

Its coastline does not give access to open seas.

China's maritime access to the Pacific is blocked by Japan and the Philippines.

Access to the Indian Ocean has to pass through the Malacca Straits, itself dominated by the Andaman and Nicobar islands-based Indian Navy.

China's One Belt One Road project is of long term strategic importance.

This ensures land access to the West for Chinese goods.

The CPEC ending at Gwadar port gives access to the hydrocarbon resources of the Middle East.

It is the only open sea access possible for China.

China's future depends upon these projects and their security.

Pakistan is thus not merely a tactical but a strategic partner for China.

The present time is ideal for China to achieve some of these objectives, like diminution of India's status and intimidation of other small Asian neighbours as the world is busy fighting the pandemic.

American power is paralysed under an erratic president facing an election in November.

The US is also distracted due to race-related internal disturbances and the raging pandemic. It has no time to devote attention to Chinese actions in Asia.

It is now or never for China. 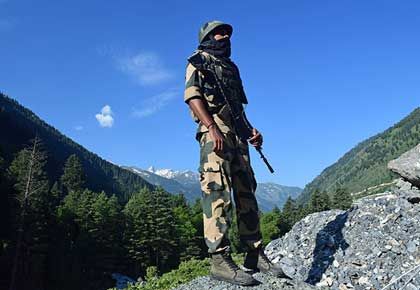