Sino-Pak: An 'all-weather' friendship under cloud

The deteriorating regional security environment and the rising tide of Islamist radicalism in Pakistan might just force Beijing to change its course towards India, says Harsh V Pant.

In an unusual outburst, China has for the first time publicly blamed Pakistan for the trouble in its Xinjiang province where around 20 people we killed in a flare-up last week. Even as Inter Sevices Intelligence Chief Lieutenant General Ahmed Shuja Pasha was visiting China, the state run Xinhua news agency lost no time in declaring that "initial probe has shown that the heads of the group had learned skills of making explosives and firearms in oversea camps of the terrorist group East Turkistan Islamic Movement in Pakistan before entering Xinjiang to organise terrorist activities." It was a stinging indictment of an "all weather friend" and the world duly took note.

China launched a major crackdown against Uighur Muslim separatists after massive riots in Xinjiang in 2009 between Han Chinese and minority Uighurs that resulted in the killing of almost 200 people in the region's capital Urumqi. Xinjiang, China's Central Asian frontier bordering Pakistan, Afghanistan and Russia, has been a hotbed of ethnic conflict and a sometimes violent separatist movement by Uighurs, who argue that they have been marginalised in their own land with the heavy influx of Han Chinese in the region.

The Uighurs remain economically disadvantaged suffering a long systematic policy of repression at the hands of the Chinese government. The fundamental causes of Uighur disaffection remain domestic and the tag of terrorism is merely employed by the Chinese government to provide a cover for their harsh policies.

Beijing has been pressing Pakistan to get a handle on ETIM militants for some time now but so far it had refrained from raking this issue publicly. After all, Pakistan is a close ally of China and the two share a relationship that has been described as "higher than mountains and deeper than oceans."

Pakistan enjoys a multifaceted and deep-rooted relationship with China underpinned by mutual trust and confidence. Islamabad has prioritised close ties with China, and Beijing has provided extensive economic, military and technical assistance to Pakistan over the years. In fact, Pakistan enabled China to cultivate ties with the West, particularly the US, in the early 1970s, as Pakistan was the conduit for then US National Security Advisor Henry Kissinger's landmark secret visit to China in 1971 and was instrumental in bringing China closer to the larger Muslim world.

Over the years China has emerged as Pakistan's largest defense supplier. The Pakistani nuclear weapons program is essentially an extension of the Chinese one. This is perhaps the only case where a nuclear weapon state has given weapons-grade fissile material -- as well as a bomb design -- to a non-nuclear weapon state.

China was perhaps the only major power that openly voiced support for Pakistan after Osama bin Laden's killing in May by publicly affirming that "Pakistan has made huge sacrifices and an important contribution to the international fight against terrorism, that its independence, sovereignty, and territorial integrity must be respected, and that the international community should understand and support Pakistan's efforts to maintain domestic stability and to realise economic and social development." It is an openly stated Chinese policy that it would like to be an "all-weather strategic partner" of Pakistan.

To underscore its commitment, China has agreed, more recently, to provide Pakistan with 50 new JF-17 Thunder multi-role jets under a co-production agreement, even as negotiations continue for more fighter aircrafts including those with stealth technology. Despite this, Pakistan wanted more from China -- underscored by its expressed desire to have China take over the operation of Gwadar port in the Arabian Sea west of Karachi, in which China has invested heavily in recent years and which serves an important role in the projection of China's naval prowess in the region.

Pakistan has suggested that the port could be upgraded to a naval base for Chinese use. China, however, immediately rejected this offer, not wanting to antagonise the US and India with the formal establishment of a base in Pakistan.

It is in this context that China's latest public criticism of Pakistan should be viewed. China has for long not been sympathetic to the Indian concerns about the export of terrorism and extremism from the jihadist infrastructure in Pakistan, fully aided and abetted by the Pakistani state. Beijing did all it could to prevent the United Nations Security Council from declaring the Jamaat-ud-Dawa and the Lashkar-e-Tayiba as terrorist organisations. It was forced to change its position only after the terrorist attacks in Mumbai in November 2008.

Today, the strategic realities in Af-Pak are undergoing a rapid change. China has a huge stake in the stability of the region, not only because it would like to use the economic opportunities in Afghanistan and the larger Central Asian region but also because the dangers of emboldened radical Islamists are as severe for Beijing as they are for New Delhi.

This presents a unique opportunity to India to make a case to China that building a moderate Pakistan is as much in Chinese interest as it is in India's. This will also test China's true intentions towards India. Recent Chinese posturing on elections in Arunachal Pradesh and revelations that China might have been behind the biggest global cyber attacks that targeted India along with a host of other nations point to trouble ahead for Sino-Indian ties.

But the deteriorating regional security environment and the rising tide of Islamist radicalism might just force Beijing to change its course towards India. There is no harm in making one last try. 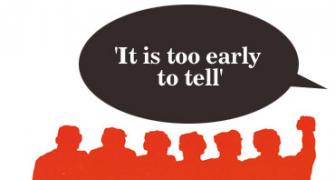 Pakistan's charm offensive works, and how!