Pakistan on Monday condemned and rejected the Indian government revoking Article 370 of the Constitution which gave special status to Jammu and Kashmir and vowed to exercise "all possible options" to counter India's "illegal" and "unilateral" step. IMAGE: Demonstrators hold signs and chant slogans as they march in solidarity with the people of Kashmir, during a rally in Karachi, Pakistan. Photograph: Akhtar Soomro/Reuters

Home Minister Amit Shah announced the decision in the Rajya Sabha under which the Indian government revoked Article 370 which gave special status to Jammu and Kashmir and proposed that the state be bifurcated into two union territories, Jammu and Kashmir, and Ladakh.

The decision to take away Jammu and Kashmir's special status and treat it like any other in the country is aimed at the ending the decades old separatist movement.

Reacting sharply to the Indian government's announcement, Pakistan Foreign Office in a statement said, "Jammu and Kashmir is an internationally recognised disputed territory".

"No unilateral step by the Government of India can change this disputed status, as enshrined in the United Nations Security Council resolutions. Nor will this ever be acceptable to the people of Jammu and Kashmir and Pakistan," it said.

Pakistan strongly condemns and rejects the announcements made by the Indian Government regarding Jammu and Kashmir, the statement said.

"As the party to this international dispute, Pakistan will exercise all possible options to counter the illegal steps," it said.

Pakistan reaffirms its abiding commitment to the Kashmir cause and its political, diplomatic and moral support to the people of Jammu and Kashmir for realisation of their inalienable right to self-determination, the statement said.

Foreign Minister Shah Mahmood Qureshi, now on a visit to Saudi Arabia, said Pakistan would request and appeal to the United Nations, Organisation of Islamic Cooperation, friendly countries and human rights organisations not to remain silent on this issue.

The situation in Kashmir was more serious than before, Qureshi said.

"We will consult our legal experts," he said.

Qureshi said that India by changing the status of Kashmir violated its commitment made in the United Nations on the Kashmir issue.

Talking to a private news channel, he claimed that the "Indian move to revoke Article 370 has no legal or constitutional justification."

The foreign minister stressed that Pakistan would continue to support the Kashmiri people and history would prove India's decision wrong.

Meanwhile, Pakistan President Arif Alvi summoned a joint session of the Parliament on Tuesday to discuss the Indian government's decision.

The joint sitting will review the tense situation in Jammu and Kashmir and along the Line of Control, Geo TV reported.

India's move on Jammu and Kashmir was also "strongly condemned" by Pakistani politicians, including Pakistan Muslim League-Nawaz president and opposition leader Shehbaz Sharif who termed it "unacceptable" and an "act of treason" against the United Nations.

He also called on the Pakistani leadership to immediately demand an emergency session of the UN Security Council and to consult with China, Russia, Turkey, Saudi Arabia and other friendly countries.

"President must immediately summon Joint session of Parliament in wake of Indian aggression" in Kashmir, he tweeted.

"International Court of Justice must be approached immediately as well as moving the UNSC and other international forums including human rights organisation," she said.

Pakistan on Sunday warned India that it is ready to respond to any "misadventure or aggression" by the Indian forces, as the country's top civil and military leadership discussed the sudden spike in tensions with New Delhi during a meeting of the National Security Committee.

Prime Minister Imran Khan on Sunday said that India is totally disregarding the international obligations and the country's "arrogance will only result in heightening the conflict dynamics in the region."

Khan invited the attention of the world leaders and international bodies towards "irresponsible, unilateral and irrational behaviour" of the Indian leadership. 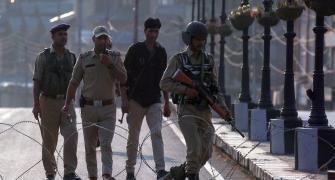