News
Business
Movies
Sports
Cricket
Get Ahead
Money Tips
Shopping
Sign in  |  Create a Rediffmail account
Rediff.com  » News » CPEC: How Pakistan is losing out to China

CPEC: How Pakistan is losing out to China

'The accusation that Pakistan risks losing sovereignty to China is emotive and has the potential to spread.'
'China will, however, remain intent on achieving its strategic ambitions of acquiring Gwadar port and securing a large chunk of Pakistan occupied Kashmir,' says former RA&W officer Jayadeva Ranade. 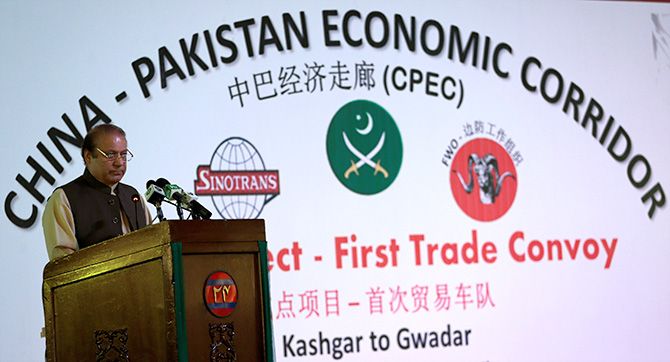 Criticism, differences and doubts regarding the China Pakistan Economic Corridor have increased in Pakistan over the past year.

The singular central thread that runs through all of them is that Pakistan's sovereignty is increasingly at risk!

As Pakistan realises that the CPEC -- with investment now raised to an estimated $54 billion -- cannot be viewed as a silver bullet that will lift Pakistan out of its dire economic difficulties or solve issues afflicting its society, doubts are magnified by the fundamental divergence in how both countries view the CPEC.

While for Beijing it is part of a larger strategic objective which it views as an essential stepping stone towards global leadership, Islamabad sees it as a solution for its economic difficulties.

Endorsed by the Pakistan army, politicians of the ruling party and some Pakistani diplomats, the CPEC has been projected as an opportunity that would ensure a 2.5 per cent rise in growth, add over 26,000 MW of energy and provide at least 700,000 jobs for Pakistanis.

Recent assessments by Pakistani economists, journalists and politicians, however, offer a different picture.

There are complaints that inter-provincial resentment and differences have flared, with accusations that the country's eastern portion, where the majority of Pakistan's economic bases are located, is being favoured.

Because fuel for the CPEC's new power plants must be imported from China's Xinjiang-Uyghur Autonomous Region, the cost per unit of electricity generated will be double the present, adding to the consumers' difficulties.

There is serious concern about the interest repayment burden on Pakistan.

The bulk of funding has come as loan-based financing to individual companies and not unconditional grants by the Chinese government, yet there is significant risk for the government as many of the power projects are under sovereign guarantees.

Additionally, loans taken from Chinese entities by Pakistani companies in the first quarter of 2017 already totals $979 million compared to only $138 million for the same period last year.

Pakistan's liabilities, both private and public, are already a staggering 75 per cent of GDP, or Rs 22.5 trillion.

Last November, Pakistan was unable to repay Rs 136.5 billion in bank loans stemming from the energy sector and postponed payment for another two years.

The trade deficit is also rapidly growing with Pakistan's imports from China rising from 4 per cent last year to 9 per cent already this year.

Politicians in the provinces meanwhile complain that while tens of thousands of Chinese workers are employed on CPEC projects, no Pakistanis have yet got jobs.

Complaints about the cost of security of the CPEC are mounting and China has declined to defray the expenditure.

Because of China's growing concern about the security of the 10,000 Chinese workers and CPEC projects, Pakistan announced it will double the size of the division-strength special security division commanded by a major general by the end of March.

Pakistani politicians, who already cavil at the expenditure of $12 million per year on the SSD, have now become more strident in their criticism.

The Gwadar port's security, which is of special concern to China, imposes a heavy financial burden on Pakistan.

In January 2016, the Pakistan navy decided to deploy two additional marine battalions to provide round the clock security at Gwadar.

On September 21, 2016, in the wake of the deterioration in India–Pakistan relations over Kashmir, Chinese Premier Li Keqiang publicly expressed reservations and told Pakistan Prime Minister Nawaz Sharif that he 'hoped' Pakistan can continue to provide protection to the CPEC and Chinese personnel in Pakistan. The warning was echoed by China’s state-run media.

In November 2016, during the inaugural Kashgar-Gwadar cargo run and subsequent transfer of containers to waiting vessels at Gwadar port, Pakistan's navy deployed ships and aircraft to provide security cover to ensure safe and secure transit and assuage Chinese concerns.

The role of Pakistan's maritime forces has increased since Gwadar became operational with Pakistan's navy assigned special responsibility to protect the Gwadar seaport project and more than 500 Chinese working there.

It has strengthened maritime security capabilities to ward off attacks by terrorist groups or insurgents on seaports and vessels by intensifying security patrols, establishing the Pakistan marines' force protection battalion and setting up coastal watch stations.

With China refusing to provide any financial assistance towards the CPEC's security expenses, the Pakistan government on September 24, 2016, decided to meet expenses incurred on the SSD by adding 1 per cent to the cost of all central energy projects and recovering it from consumers through the national electric power regulatory authority.

The senate standing committee on planning development and reform has protested at billing citizens for providing security to thr Chinese in Pakistan.

Pakistani analysts have also now begun pointing to China's undue interest in Gwadar port. They point to the unmistakable similarities between Gwadar and Sri Lanka's Hambantota.

Saddled with unpayable Chinese loans, Sri Lanka now intends to allow a $1.4 billion debt for an 80 per cent equity swap that will allow China a 99-year lease on the Hambantota port and 1,500 acres of adjacent land.

In Gwadar, the development of which the Chinese agreed to fund only in 2007 after Pakistan agreed to grant it 'sovereign guarantees to the port facilities' after decades of hard negotiation, the Chinese have signed a 40-year lease on 2,300 acres of land to develop a 'special economic zone' and an international airport.

Gwadar additionally symbolises the sense of alienation felt by many in Balochistan.

The Balochis assert that local fishermen have been forced to leave Gwadar, that they will soon become a minority in their homeland, and that most of the benefits of the CPEC are going to outsiders.

The biggest threat to the CPEC and, potentially Sino-Pak relations is the unchecked rise of radicalisation of Islam in Pakistan.

The closure on January 11, 2017 of the borders of China's restive Xinjiang-Uyghur Autonomous Region with Pakistan is the first visible crack in the gloss of lacquer that the CPEC seeks to put on the China-Pakistan relationship.

China informed Islamabad last January that it plans to raise a 10,000-strong 'private army' for deployment in the CPEC to protect workers and construction sites.

The accusation that Pakistan risks losing sovereignty to China is emotive and has the potential to spread. It could get aggravated with the presence of Chinese security personnel in Pakistan.

Increasing criticism of the CPEC will hamper completion of numerous projects. China will, however, remain intent on achieving its strategic ambitions of acquiring Gwadar port and securing a large chunk of Pakistan occupied Kashmir and adjacent areas.

In case of increased problems, it will invest an amount just adequate to keep the Sino-Pakistan relationship in a state of decent repair.

Jayadeva Ranade, former Additional Secretary in the Cabinet Secretariat, Government of India, is presently President of the Centre for China Analysis and Strategy. 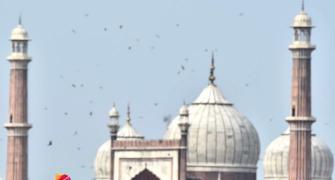