Even as the polity find ways and means to address the genuine concerns and fears of the society, the Sri Lankan State apparatus would have to unravel these mystery-questions with convincing answers, and a road-map to the future, says N Sathiya Moorthy. 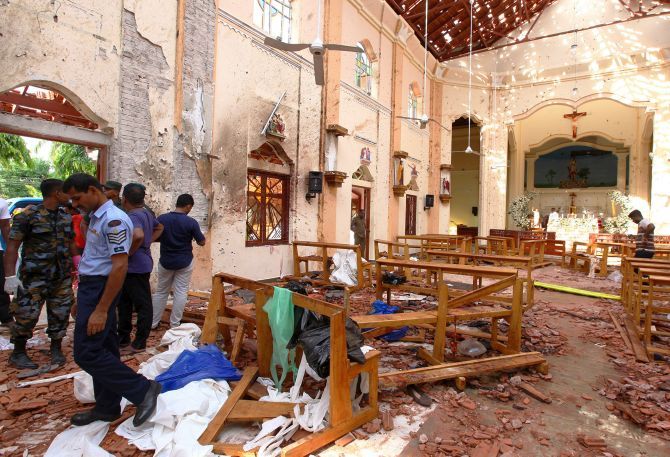 IMAGE: Sri Lankan officials inspect St Sebastian's Church in Negombo, north of Colombo, after multiple explosions targeted churches and hotels across Sri Lanka on April 21. The blasts took place at churches in Colombo city as well as neighbouring towns and hotels, including the Shangri-La, Kingsbury and Cinnamon Grand, during the worst violence in Sri Lanka since the civil war ended a decade ago. Photograph: Stringer/Getty Images

Going by the precedent set by the 26/11 Mumbai terror attacks, Sri Lanka’s Easter Sunday carnage should have triggered not only concern but also interest in the nations to which the victims belonged. On the very day of the blasts, meeting newsmen in capital Colombo, Prime Minister Ranil Wickremesinghe said that his government would seek assistance from foreign nations, if required, to untie mysterious knots.

Sri Lanka has had a history of terrorism, yes, dating back to the pre-26/11 and even pre-9/11 days, respectively a regional and global benchmark. Before the LTTE became a household name for terrorism across South Asia and in many nations across Asia and Europe, Australia and the Americas, not to leave out parts of South Africa, the nation had faced two centre-left Sinhala insurgencies of the Janatha Vimukthi Peramuna, or ‘People’s Liberation Movement’, respectively, in 1971 and 1987.

Global nations had helped Sri Lanka in ending LTTE terrorism especially, though India helped militarily in neutralising the First JVP insurgency, when post-Independence Sri Lankan armed forces were still in their ceremonial infancy. To the LTTE’s ruthlessness, cunning, planning and training should the nation’s armed forces, too, owe their subsequent upgrade and successes, until the very neutralisation of the terror-group so very completely in May 2009 -- a full decade back.

As is readily acknowledged prima facie that the diabolical nature of the Easter Day serial blasts, the precision and the ‘success’ all point to a more organised effort. Until proved otherwise, the Sri Lankan government seemed to stick to the investigators’ preliminary findings that it was the coordinated job of a local radical Islamist group, ‘National Tawheed Jamaat’.  A week and more into the investigations and raids, there is nothing to prove otherwise.

Sri Lankan government officials have been consistently pointing out that all those arrested thus far are Sri Lankan nationals -- as were the suicide-bombers. Yet, they are not unlikely to proceed on that sole assumption. If there are leads pointing elsewhere, they are not going to give up. It is here that they may seek help from other nations, if and when required.

On the face of it, Sri Lanka, if required, will seek ‘foreign assistance’ in following up on specific leads, where found, a statement on the day of the blasts, said. If it pointed to a particular direction, it is bound to seek the extradition of Sri Lankans and/foreign nationals required back home for further investigation and interrogation, trial and punishment. 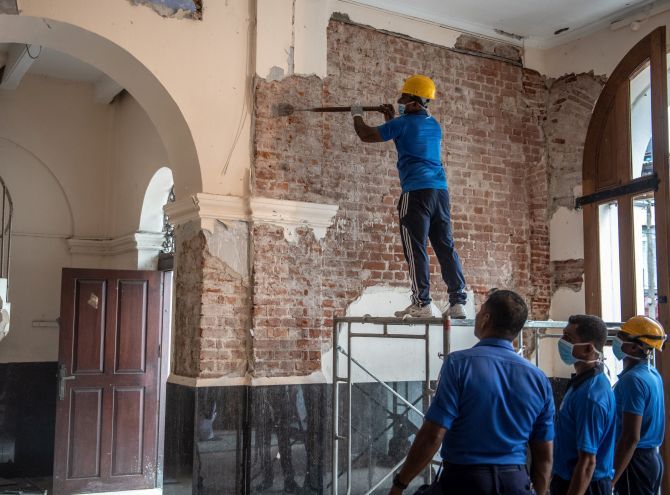 Considering that President Maithripala Sirisena is enthusiastic about reviving the execution of court-ordered death penalties in the case of drugs-related offences, terrorism is not going to be exempted, either. In a way, even the current global voice against reviving death penalty in Sri Lanka for drug-offences in Sri Lanka may have to take a back-seat.

If nothing else, there would be much fewer sympathetic voices to support such demands for leniency than before the Easter Sunday blasts. Specifically, there could also be vague demands for proceeding against LTTE cadres, either inside the country, or whose extradition Sri Lanka may be forced to demand under domestic pressure, to stand trial for terror-killings from the past, and face the music. It is thus not unlikely that the ‘peace glove’ of the post-war decade may be off.

Sri Lanka got its share of global sympathy and support in fighting LTTE terrorism squarely only after 9/11 aroused the global conscience. Once it was all over, the ‘international community’ (read: West) reverted to issues of human rights violations and war-crimes probe, before the post-war United Nations Human Rights Council campaign in Geneva was revived -- not once but twice.

The first one, Sri Lanka got defeated through the joint efforts of Asian neighbours, India, Pakistan and China, just 10 days after the end of the war, but the second one, it is facing through and through -- to varying degrees of seriousness and not, depending on who is in power in Colombo.

Or, so it seems. For many Sri Lankans, the consistency with which UNHRC seems to be following up on the co-sponsored 2015 resolution on ‘war-crimes probe’ has become a bit of a joke, after main sponsor in the US, quit the very organisation, alleging ‘bias’ of all things.

Yet, the government is not jumping to conclusions -- or, so it seems. The Sri Lankan agencies entrusted with security and investigations seem to be doing a thorough job of both, yet, there is visible lack of coordination. They are also not sharing information, either with the nation’s population or with foreign governments.

The Sri Lankan government, including President Maithripala Sirisena and PM Wickremesinghe, have readily conceded that a ‘foreign intelligence agency’ had sent out a series of alerts about the impeding blasts, naming the day and the possible targets. The president sacked Defence Secretary Hemsiri Fernando and replaced him with Lt-Gen Shantha Kottegoda, who had headed Military Intelligence during 2004-05.

According to some local media reports, Kottegoda was also the army chief before the war commenced and later-day Field Marshal Sarath Fonseka took over. Now, PM Wickremesinghe is said to be pressuring President Sirisena to make Fonseka, a party parliamentarian, as minister in charge of law and order.

Such reports come up as a crude reminder, not of the war days when Fonseka was the chief, but to the more recent Sirisena-Wickremesinghe political and personal clashes, leading up to the sacking of the PM and replacement with former President Rajapaksa. Typical of the man, Fonseka, then a sacked cabinet minister, wanted the president tested in a mental hospital, with the result when the Supreme Court restored the job to Wickremesinghe, Sirisena refused to swear in Fonseka to any post. The United National Party, headed by Ranil Wickremesinghe, did not protest, then. 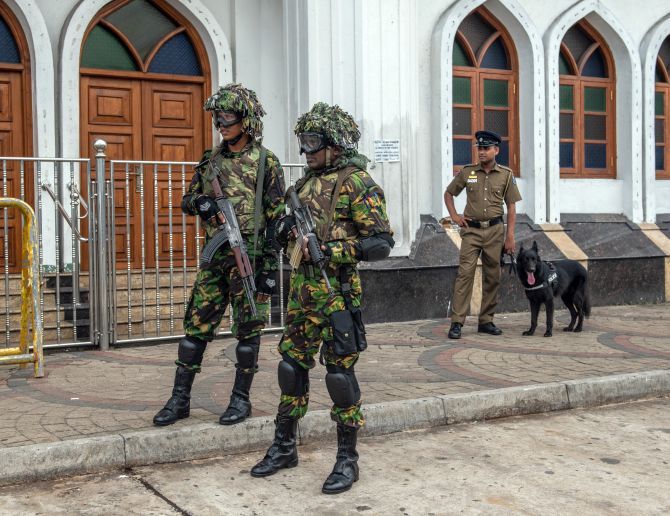 IMAGE: Police Special Task Force officers patrol outside Dawatagaha Jumma Masjid in Colombo, Sri Lanka. Security has been heightened in the country ever since the blasts, which killed over 250 people. Photograph: Carl Court/Getty Images

It may be too early to conclude that the worse may be over for Sri Lanka, but the defusing of a few more explosives and the seizure of a large number of detonators, may point to the possibility that the perpetrators may have concluded that it had to be a one-off affair -- and that they might not get a second chance, if the nation’s intelligence agencies and security forces, with their vast and varied experience, dusted their boots and racked their brains, all over again. It need not be wholly true as the subsequent gunfire showed a couple of days later.

The high number of arrests, and seizure of explosive material, including large quantities of twin-use of chemicals and also detonators, may have led to the investigators to  conclude if it was only a local job as officially claimed, or there may have been a foreign angle, after all -- and if so, who and how much. If nothing else, the investigators seem to have ruled out an LTTE hand, most definitely in the blasts -- and possibly also on the ‘supply side’. Tamil National Alliance veteran leader R Sampanthan said as much in a overseas telecast interview -- and rightly so, it would seem.

Until the investigators unravel all ends of the mystery, questions will remain: Who trained them in bomb-making, where and how, who psyched the suicide-bombers from among them to do the act a full decade after LTTE alone had seemed to be so very successful in the act? What were all the motivating factors -- was it the ‘Islamic State' brand of radicalisation (for reasons known and unknown), or local alienation caused by a series of episodes involving two other major ethnicities, namely, the Sinhala-Buddhist majority and the Sri Lankan Tamils, or both?

Even as the polity and the society, starting with the political administrators and community leaders, find ways and means to address the genuine concerns and fears of the Muslim community, the Sri Lankan State apparatus would have to be busy unravelling these mystery-questions with convincing answers, and a road-map to the future.

All this may be too much of thinking, yes, but not possibly for the terrorism-hardened Sri Lankan investigators, who no doubt have seemingly slackened over the past decade -- whatever the reason and justification, but cannot afford to do so from now on.

Independent of all the political tangles that have demoralised and disinterested the security forces and the intelligence agencies, it is a fact that they had got used to smelling and feeling the LTTE long before either of them ‘targeted’ the other. It is not an insurmountable problem, yes, but the intervening hiccups would show up for what they are worth -- just in the way the Sri Lankan security forces had learnt to tackle the JVP and the LTTE in their respective times. 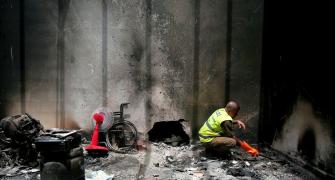 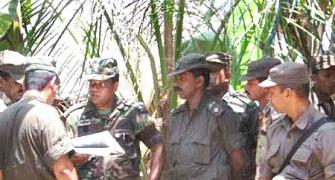 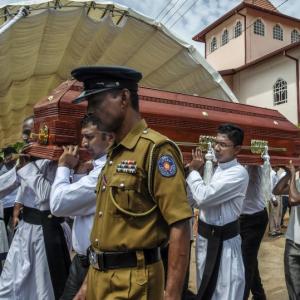