On its 25th anniversary, Sukanya Verma lists 10 things she still loves about Mohra. 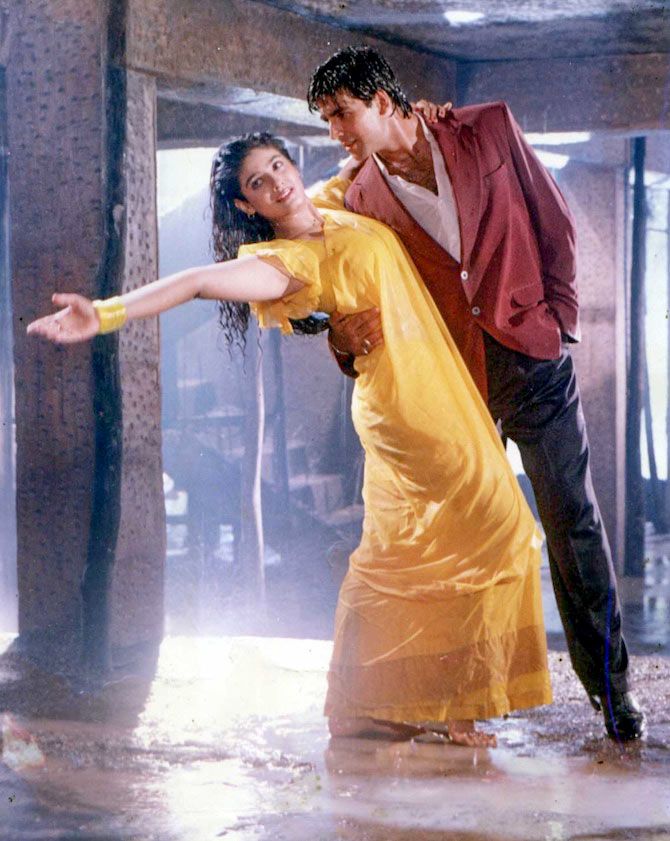 Monsoon and Mohra are intertwined in my nostalgia.

On screen, Raveena Tandon was making a scintillating first move in the pouring rain wearing an ochre yellow sari on some floor of an under construction building in Versova.

Outside, a massive crowd of moviegoers, unperturbed by the incessant downpour, queued up to fill Goregaon's Topiwala theatre, in north west Mumbai, to full capacity.

I was one of those starry-eyed cinephiles.

Back then in 1994, an easily pleased school kid, I was determined to catch my favourites Suniel Shetty (my Shetty fixation was its peak. To what extent read here) and Raveena directed by the King of slick masala and multistarrers, Rajiv Rai.

The threat of not making it on time loomed large, thanks to the spoilsport weather and lack of autorickshaws.

My college-going brother and reluctant film companion had moved on to more sophisticated turf and mocked my affection for a potboiler that rips-off Terminator's background score for coolth (Viju Shah's version is actually better!). He would be only too happy to give it a miss. But there's no way I was going to let that happen.

My other chaperone for the evening, Mom, predictably got stalled in the local train. In a pre-cell phone era, there was no way of knowing where she was or how long she would take.

Well, she had her ticket and we had ours.

My protesting skills were working and nothing would stop me from watching Mohra that day.

In fact, I was too engrossed to even notice when my drenched-to-the-bone mother made her entry bang in the middle of Mohra's big reveal about Jindal's blindness.

Twenty five years later, it's still raining cats and dogs in Mumbai and Mohra's Tip Tip shows no signs of slowing down.

Mohra was an underdog when it came out.

Akshay Kumar and Suniel Shetty had hits, but no credibility.

Raveena Tandon had finally got rid of her 'jinx' tag with Dilwale.

Naseeruddin Shah and Paresh Rawal had a good run in 1993's Sir, but nobody expected it to break the bank.

If veteran film critic Khalid Mohammad's review declared No-More-Aah, director Vidhu Vinod Chopra lashed at the audience for taking to such lowbrow cinema and staying indifferent to his refined labour of love, 1942: A Love Story.

But Mohra was on fire.

Had it not been for Hum... Aapke Hain Koun!'s phenomenal success a month later, Mohra -- and Dilwale -- would be 1994's ultimate toast.

As one of its biggest fans and frequent watchers, I will vouch for its unabashed entertainment.

It's a world where sub-editors show up on front page of their newspaper, but the picture used is from a party that'll happen only an hour later, cops and reporters dance in funky costumes at nightclubs to nab smugglers and ex-convicts become vigilantes on a publishing magnate's urging.

Still, a fair bit of warning is necessary.

One is raped, another kills herself to escape rape and the third is at receiving end of an attempted rape until the hero comes to her rescue.

I'd probably wish away Shetty's gruesome flashback, featuring both of the above, if it wasn't for his loaded theme park revenge long before Game of Thrones made slashing throats and stabbing intestines a routine sight.

It's a comic book narrative whose black and white portrayal of swashbuckling heroes, flamboyant villains and goofy comic reliefs has an ultra glamorous woman at its centre in Raveena's ravishing reporter, Roma Singh.

Moved by golden-hearted convict Vishal Agnihotri's (Shetty) 'nobody hurts the jailor's daughter on my watch' gesture and 'killed for justice' backstory, she dumps her 'angrezon ke zamane ka jail' piece to focus on Vishal's release on humanitarian grounds.

Fat chance of that ever happening, but Mohra has an ace in Naseeruddin Shah's persuasive oratory.

Few minutes of his Jindal's diatribe directed at 'Kanoon ke dalal' and 'Kanoon ke thekedar' are enough to convince the special conference and us that Vishal deserves to return back to his stylish wardrobe of leather jackets and fitting jeans (from his own boutique, Mischief).

The screen knows it. The audience knows it. Hell, they know it.

And for a few years, the mast-mast jodi is Bollywood's gold standard in reel-turned-real chemistry.

Add in superior Kamdev Kulkarni (Sadashiv Amrapurkar) and subordinates Kashiram Sahu (Paresh Rawal) and Kranti (Harish Patel) to the merriment and Mohra is good to go. Of course, the actual fun starts after the blind Jindal takes Vishal under his wing and instructs him to go after drug lords Gibran (Raza Murad) and Tyson (Gulshan Grover) in the same misleading way Anupam Kher deceived Sunny Deol in Arjun.

Mohra's confidence in Naseer's about-face is as potent as its faith in Anna and Akki's brawn.

What follows is raw, roaring action, dazzling romance, trippy face-offs and a delightful contest between swaggering good and pompous evil best enjoyed with a pinch of salt.

Bollywood masala is not what it used to be.

It's either too tame or too gimmicky.

But Rajiv Rai, a whiz at combining technique, casting, storytelling not to forget his groovy use of Viju Shah's catchy, not-always-original music, had the gift of balance.

I've lost count of the times I've seen it since it first released in July 1994.

On its 25th anniversary, Sukanya Verma lists 10 things she still loves about Mohra. 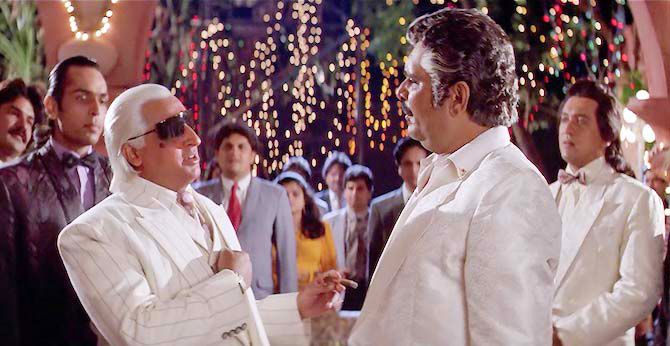 Jindal, Tyson, Gibran, Rizwan, Marcos, Minto, Flora, Jackson and Binda Thackeray -- it's like Rai and co-writer Shabbir Boxwala opened the newspaper and decided to name all of Mohra's miscreants after whatever name flashed before their eyes.

Jindal and co are like the anti-Avengers, a mega team of super villains and gun-toting sociopaths gleefully spreading menace in their fierce avatars and cunning smiles.

Some have buckteeth, some have moles, some wear contacts, a pair of gangster brothers evoke Abbas-Mustan, but even as a caricature, Mohra is a hoot.

The onslaught of evil isn't limited to the central baddies.

From Shetty's burly, creepy-faced inmate stomping into the opening credits to the sleazy quartet spiking drinks of unsuspecting victims, vileness is omnipresent in Mohra.

Every now and then a ganjee-clad flunky shows up to ask Suniel Shetty, Kaun ho tum?

Another one makes the same inquiry. Electrician, he insists.

Wolf whistles by the dozen.

Most of it -- choreographed by Raam Shetty -- takes place in warehouses and factories, prisons and safe houses what with action heroes Akshay Kumar and Suniel Shetty showing off their mastery in martial arts and brute force.

There's no scarcity of guns, grit and ghusebaazi but Shetty's killing two birds with one stone shootout sequence and the climatic showdown at Hyderabad's Qutubshah Tombs deserve special mention.

THE MAGIC OF MAST MAST AND TIP TIP Raveena is referred to as the Mast Mast girl even today and her sultry presence in Tip Tip makes us hard to imagine Akshay recreating the iconic rain song with Katrina Kaif in Rohit Shetty's Sooryavanshi.

The solo version of Mast Mast, Main Cheez Badi Hoon wasn't there in the early prints.

They added it following the movie's success.

Though Ravs looks red-hot in those Gajar Ne Kiya Hai Ishara-reminiscent harem pants, the item number is a needless addition to a straightforward heroine-trapped-in-villain's lair trope.

THE CHEEK AND CHEWING GUM Authenticity be damned, her character understands that the only way to grab eyeballs in Mohra's men-only club is be upfront and force her way into the story.

Her saucy take on the quintessential eye candy takes a life of its own. If she comes on too strong, she is unapologetic.

It's a super filmi disclosure that owes much to the brilliant Naseer and his effortless switching from do-gooder to devil.

Masala and contrivances go hand in hand, but it takes an actor's wholehearted submission to buy baloney to sell baloney. 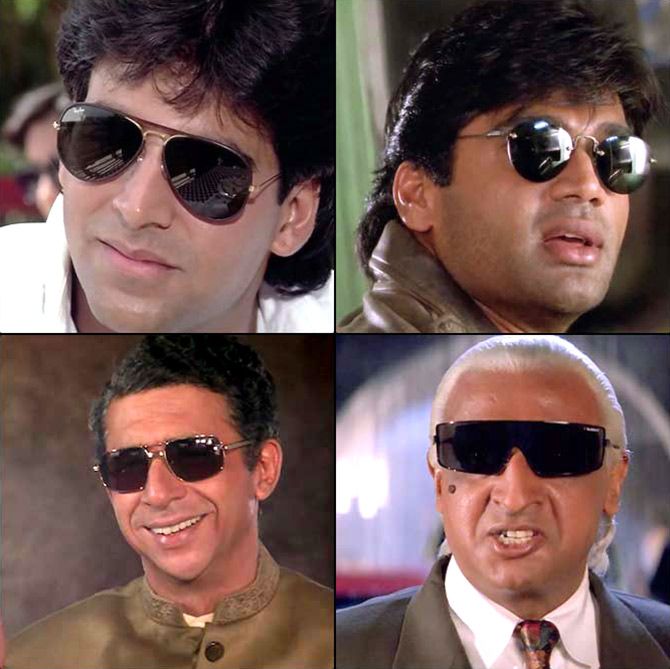 Raveena must have lost her mind dubbing for this one. The actress cries 'Naheeee' at least 100 times in the movie.

Suniel Shetty saves more izzat than a person spells izzat in a lifetime.

In his first scene, he's saving Raveena from a lecherous inmate.

In his last one, he sacrifices his life to save Akshay Kumar from stripping before Naseer and his kinky demands.

How does jobless Naseer become so affluent and influential in the first place?

Then how come he's an illustrious publisher still hankering for the top drug lord's post?

So many questions, Mohra insists we turn a blind eye to. 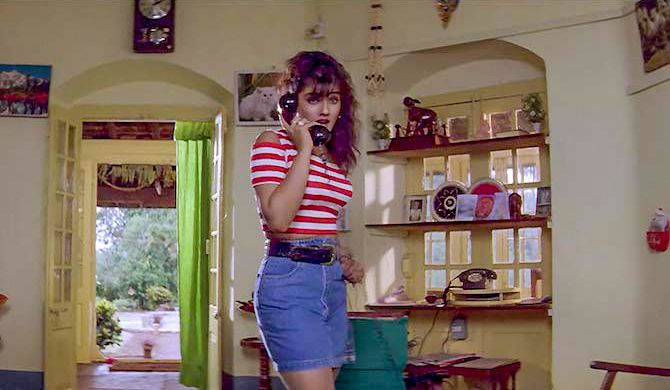 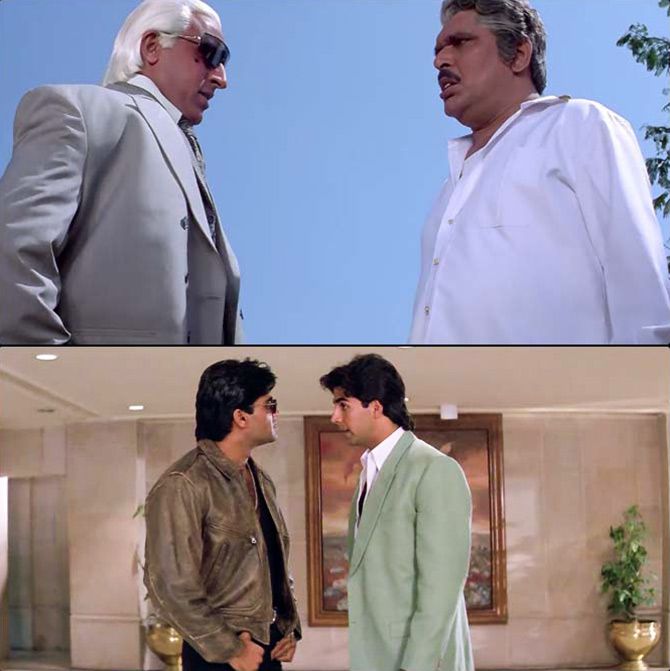 The face-offs in Mohra are everything. Be it between Amar and Vishal, Vishal and Jindal, Gibran and Tyson, the Gods of badassery smile hard on this film. 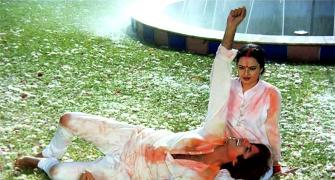 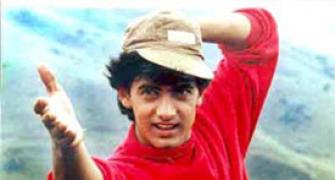 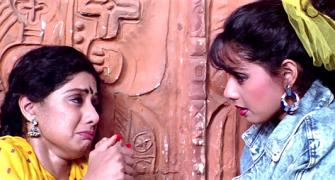 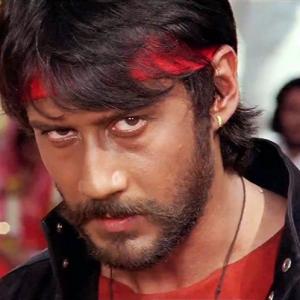 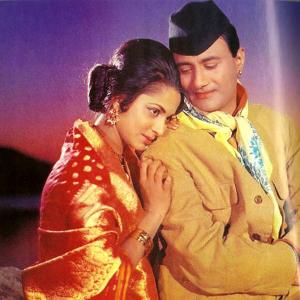