Silsila didn't work. But its roaring rang of romance continues to colour every single Holi.
Sukanya Verma revisits this classic. No Holi celebration since 1981 is complete without the sound of Amitabh Bachchan's Rang Barse Bheega Chunarwali blasting off the speakers.

The mischief in his durable voice spewing racy, adulterous, suggestions and reveling in the after-effects of potent bhaang to serenade his much married muse in a gulaal-painted stupor while their shocked spouses look on is the quintessence of Yash Chopra's Silsila.

And the indecorous rituals of Holi.

Lines are crossed, clandestine romances come out in the open and embarrassment and heartbreak struggle for first place as the high-spirited festival of Holi, synonymous with flirting and horseplay, becomes much more than friendly fooling.

That song is a mini summary of Chopra's much-hyped take on extra-marital affairs best known for the cast of Amitabh, Jaya Bachchan and Rekha -- both its prize and problem. 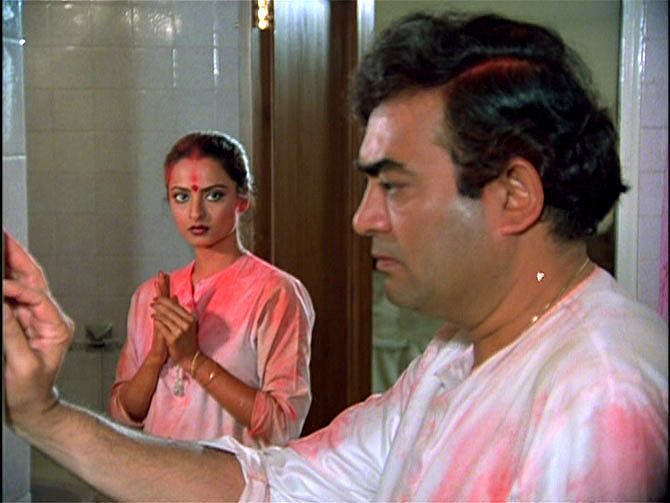 Slyness is the soul of Silsila.

Although only Amitabh Bachchan's Amit is a playwright, nearly everyone speaks like characters of a drama.

Every dialogue is poesy and means to insinuate more than what is spoken. Often alluding to a person's state of mind.

It is a gorgeous line like many others written by Sagar Sarhadi and Silsila happily resorts to romanticism to distract us from the ensuing poppycock.

Irresistible and frustrating in equal measure, it feels like a self-aware, shrewd vanity project playing on our unnatural curiosity about celebrity lives. 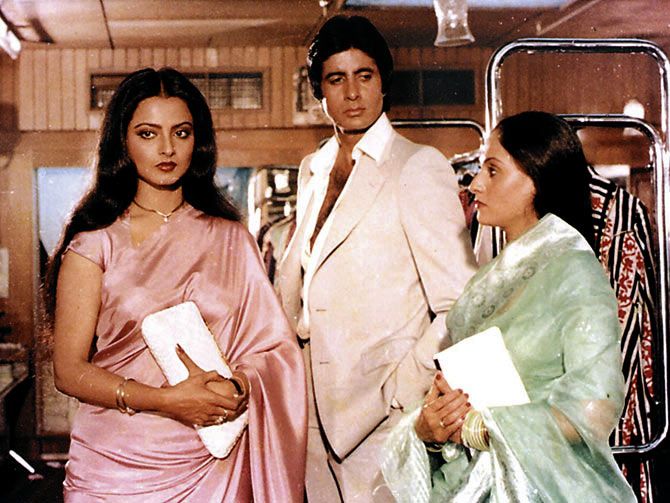 The very idea of AB, Jaya and Rekha sharing a frame screams sensational.

It has been over three decades but public interest in their alleged triangle refuses to die.

You can only imagine what a big deal it was in 1981 after Jaya and Rekha replaced the original choices Smita Patil and Parveen Babi. But in trying to tease the viewer and toe the line between speculated and make believe, Silsila oversells its premise.

Part of the problem is the writing. It is all over the place.

Chopra's best romances are a beautiful blend of breezy courtships and intense conflicts boosted by a sound narrative and pretty aesthetics. Even at their most melodramatic, they are brimming in conviction. 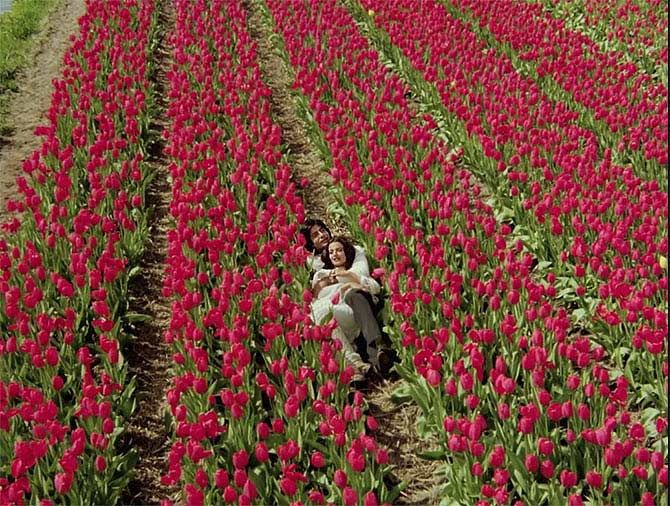 Silsila's sluggish pace and weakly written roles fail to live up to the boldness it promises. No wonder it wasn't a success.

Of its 180 minutes, the first hour is devoted to AB wooing Chandni (Rekha), a stunner he met at his best friend's wedding, with roses and romantic letters recorded in a cassette.

Picturesque dream sequences in tulip fields of Amsterdam and midnight walks in uncharacteristically safe neighbourhoods of Delhi against Shiv-Hari's breathtaking melody and Javed Akhtar's dreamy lyrics raise a toast to their scorching passion.

The focus then shifts to an extended bromance between him and Shashi Kapoor -- how cool is that a guest appearance gets top billing?

Their drunken merrymaking and showering sessions labours to highlight a camaraderie so significant he'll agree to marry the latter's pregnant girlfriend after he dies in air combat. 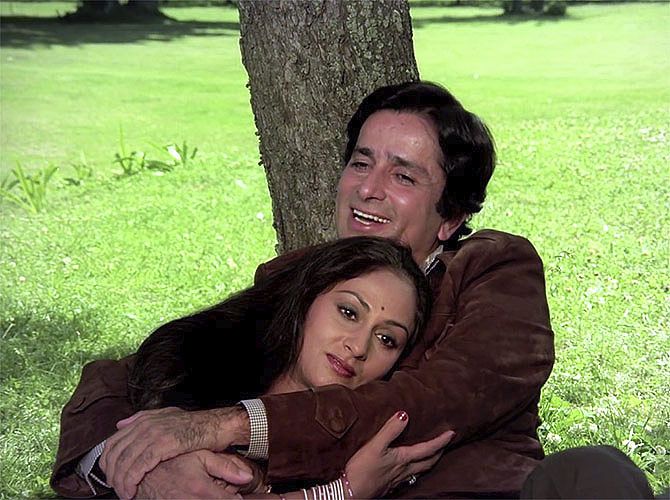 After all this, she has the audacity to claim, 'Main itni kamzor nahi ke doosron ke sahare jeeon.'

It is painful to watch her humiliation especially because how dignified and understated she actually is. 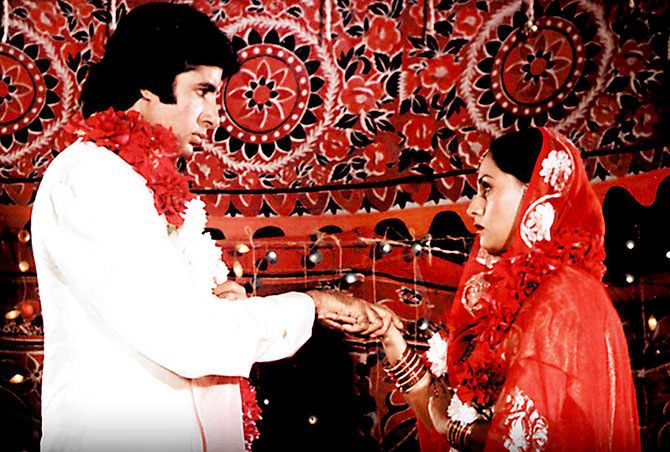 The women of Silsila are pure cardboard.

Rekha looks like a goddess, absolutely divine in her flawless makeup and ethereal wardrobe -- the classic Yash Chopra dream but ask her for some spine, there just isn't any.

If the women are sorry figures sans any agency, the man they are declaring a war of pyaar versus vishwas is foolish beyond compare.

For an evolved writer, believe it or not, an Academy Awards nominee at that as Sushma Seth announces, Amit behaves like an impossible teenager who first makes silly decisions, regrets them almost immediately and wants his life back just the way it was at the expense of hurting everyone in it. 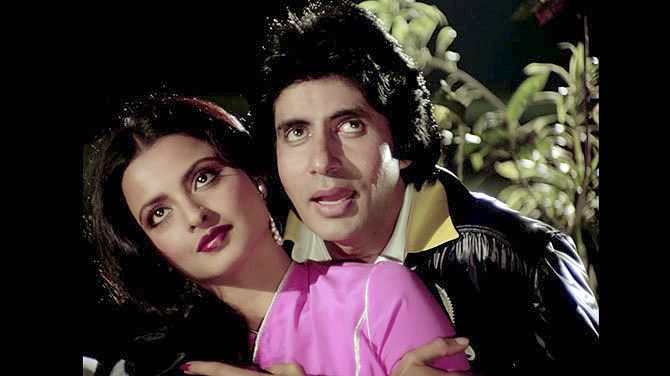 Despite these glaring flaws, Silsila is immensely watchable.

Chopra's plush sensibilities turn every frame into a postcard beauty and mellifluous gem.

Affluence abounds as the scenes and songs shifts from five star hotels and world-famous gardens to sprawling kothis and their elegant interiors.

Injecting life into its cosmetic allure are actors seasoned enough even to make sense of its contrived complications.

The sight of AB reciting poetry, his lived-in intimacy around Jaya, undeniable chemistry with Rekha does a good deal to damage control for its super selfish on-screen avatar. But it is Sanjeev Kumar's gracious better half walking away with all the sympathy and glory.

When it comes to the rest, Silsila refuses to let them be.

Sure, it is 1980 and Indian society's hawk-eyed, judgmental, moral police is brutal in its scrutiny, even towards those who can afford private choppers.

Undecided between its regressive and rebellious impulses, Chopra burdens the society-defying aspiration of his leads with moralistic repercussions and a guilt that doesn't feel authentic. And its need to drive that last minute by tossing in a Punju aunty instructing how 'Aurat ka maan maa bankar hi hai nahi toh woh aadhi aurat hai' is pure cringe.

So by the final scene, Chopra is back to his favourite accident ruse to control the fate of its characters and thrust them into a marriage that is right not romantic.

Silsila didn't work. But its roaring rang of romance continues to colour every single Holi. 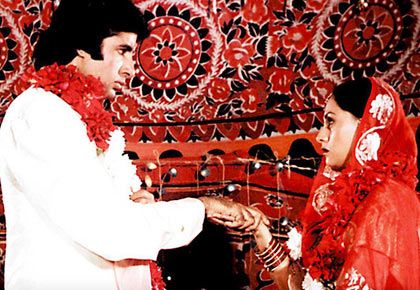 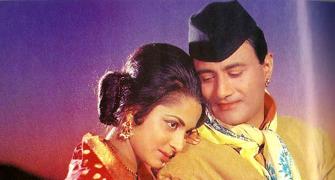 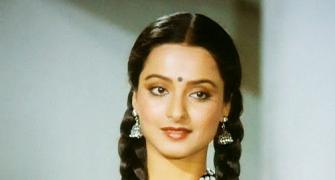 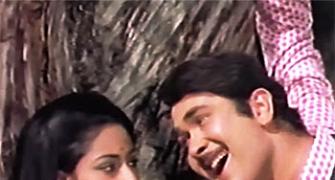 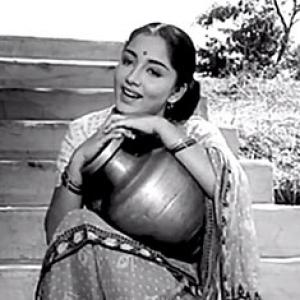