Even with an ongoing pandemic, theatres in many states functioning at 50 per cent occupancy, a relatively quieter social life and fewer movies, Bollywood still managed to pack in plenty of drama and trauma, fun and festivity, love and war into the year.

Here's the concluding part of the A to Z guide to a year that will soon become history as chronicled by Rediff.Com Senior Contributor Roshmila Bhattacharya. 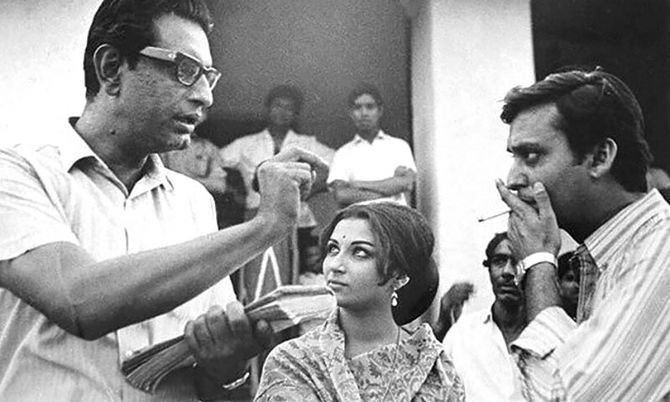 No, we are not talking about the Netflix anthology Ray, which could hardly count as a tribute to the Master in his centenary year.

We mean the man himself, Satyajit Ray, a Bharat Ratna, Padma Bhushan and Padma Shri recipient, and winner of the prestigious Dadasaheb Phalke Award.

The auteur put Indian cinema on the world map, bringing home the Silver and Golden Bear from Berlin, was accorded France's highest decoration, Commander of the National Order of the Legion of Honour and presented with an honourary Oscar while on his hospital bed.

The Films Division streamed documentaries by him and on him on the occasion of his centenary while the International Film Festival of India celebrated with a Special Retrospective of 11 of his curated films.

And then there was 3 Rays: Stories from Satyajit Ray, the first book in The Penguin Ray Library series, with more than 40 stories and poems, the master translating not just his but also works of his grandfather Upendrakishore Ray and his father Sukumar Ray.

What makes the book a collector's item are many unpublished works, autobiographical writings and illustrations by Ray which offer a window to his creative genius.

Wish some film-makers would find their muse in these timeless writings without trying to contemporise them given that they are a Ray of light.

S for SOORYAVANSI & THE SOUTH INVASION 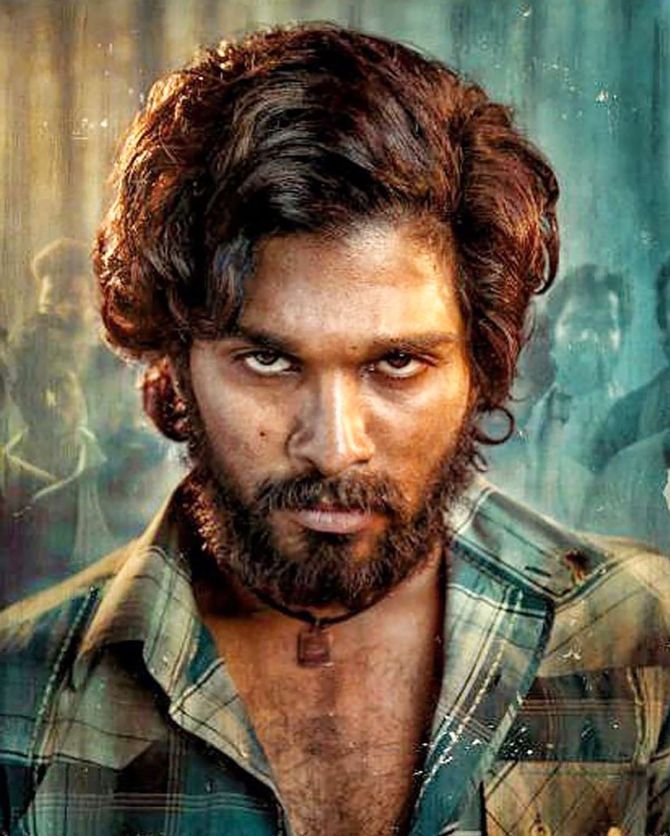 But if Hindi films have done a cumulative business of around Rs 450 crore (Rs 4.5 billion) this year, then their South counterparts have done double that.

With a sozzled Master, Allu Arjun's Pushpa: The Rise, the Telugu PINK, Vakeel Sahab, Rajinikanth's Annatthe and Doctor and so many others, dakshin Bharat is fast outscoring pan-India. 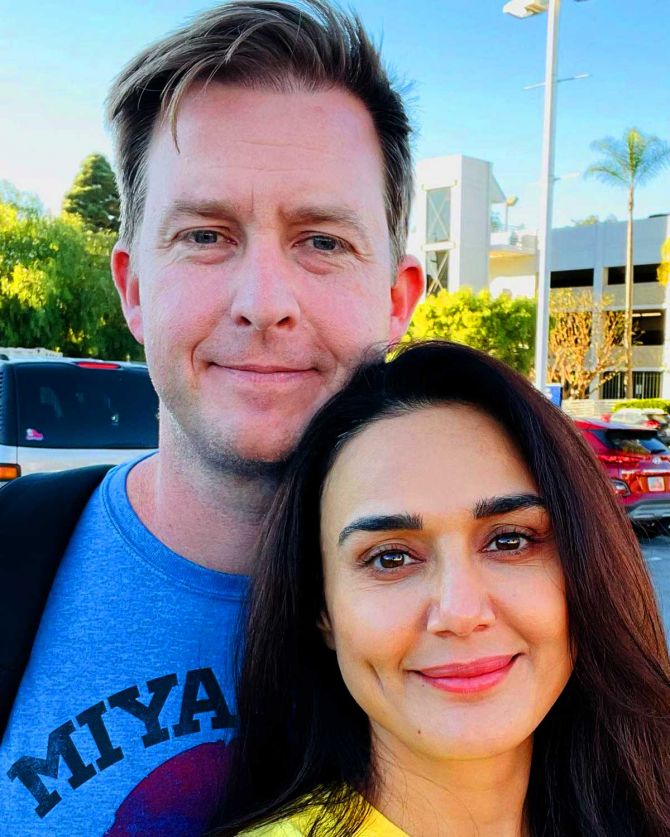 In November, 46-year-old Preity Zinta announced that she and her husband of five years, Gene Goodenough, had become parents to twins, Gia and Jai, via surrogacy.

Saif Ali Khan and Kareena Kapoor extended their family with a second son. And as with Taimur four years ago, they were trolled for naming their son Jehangir. 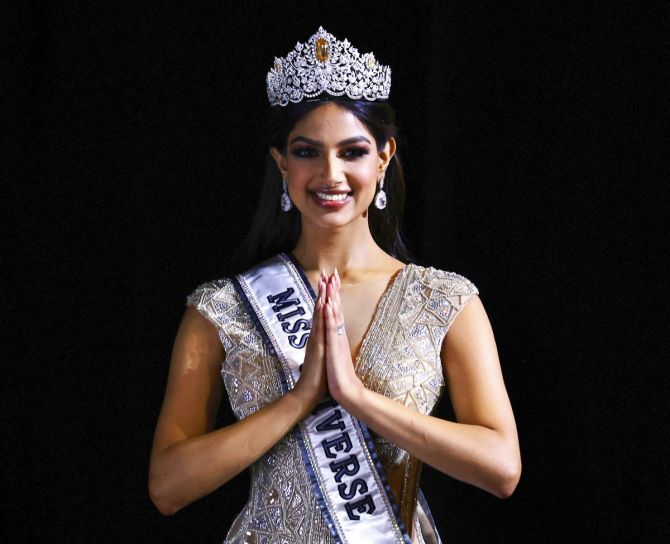 Twenty-one years after Lara Dutta, India had another Miss Universe in Harnaaz Sandhu.

Meanwhile, it's been a busy year for Lara, who appeared as Prime Minister Indira Gandhi in the espionage thriller Bell Bottom. She's also getting raves for her separated single mother with a confused teenage daughter and a commitment phobic brother in the eight-episode series Hiccups and Hookups.

The other Miss Universe, Sushmita Sen took her Web series Arya to the International Emmys, before flagging off a second successful season.

She became a bigger heroine when she revealed that she had been diagnosed with Addison's disease in 2014 but she had fought back with Nunchaku workouts to not just conquer the chronic illness, but emerge stronger and fitter. 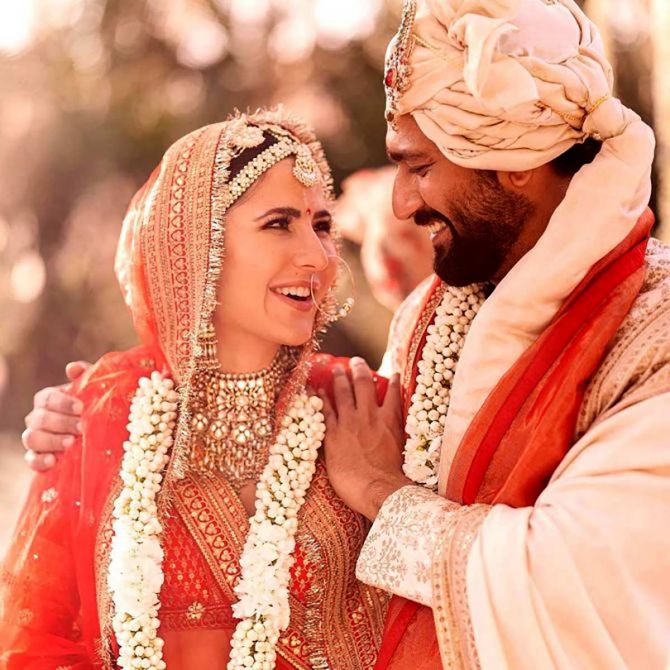 Vicky Kaushal and Katrina Kaif got married in a beautiful fairy-tale wedding in Rajasthan, managing to keep the big event of the year a secret all through.

Despite the combined might of busybee paps, prying media channels, an intrusive social media, gossiping guests, clicking smartphones and prying neighbours they kept the festivities private.

But there's was not the only private star wedding.

Yami Gautam and Aditya Dhar had a quiet wedding in the hills while Dia Mirza got married to Vaibhav Rekhi in the garden area of her own home.

Best friends Rajkummar Rao and Patralekha got married in Chandigarh, Rhea Kapoor and Karan Boolani had a monsoon wedding, and Alia Bhatt was bridesmaid at her BFF Anushka Ranjan's wedding to Aditya Seal. 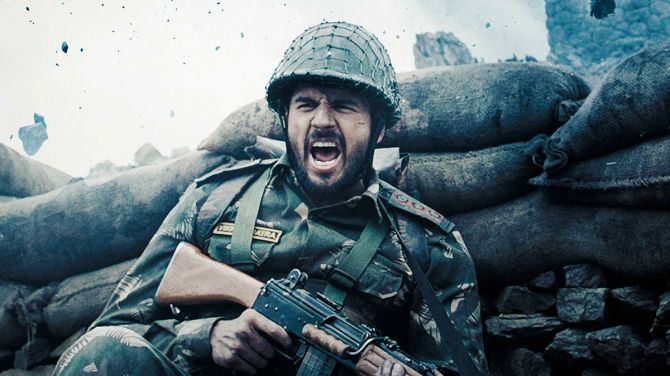 The film has turned Sidharth Malhootra from a student struggling to graduate to a much-feted hero.

The actor, who enters a decade in showbiz, is carrying the war games forward into the new year as an undercover R&AW agent in Mission Majnu, which is set against the 1971 War.

Karan Johar has also got cracking on Yodha, an action franchise with his favourite protégé, with Part One being unveiled in a few months to cash in on Sid's new-found success. 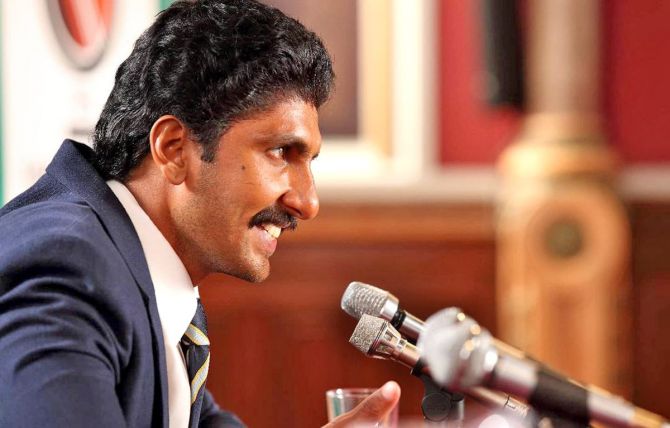 This year, Santa brought the World Cup home to India. Since its very first show, Kabir Khan's sports drama, which recreates India's unbelievable '83 triumph at Lord's, has been getting raves.

What makes it an emotional experience is that the original cricketers, including captain Kapil Dev, have been drawn into the promotions along with the actors playing them.

So while the memories may be sepia-tinted, the smiles and tears are fresh. 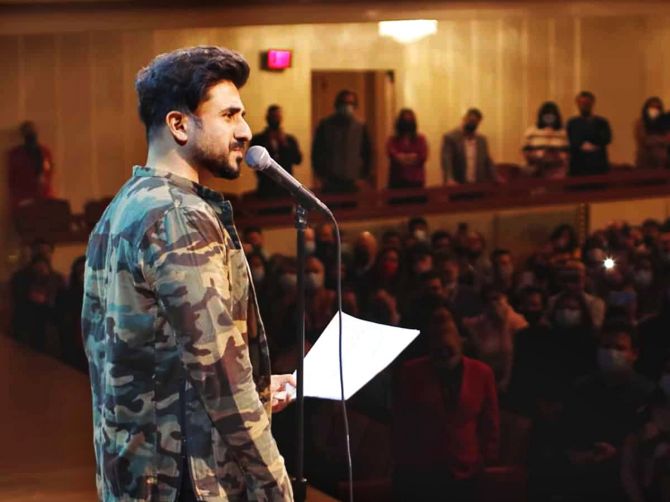 IMAGE: Vir Das in I Come From Two Indias.

Vir Das's six-minute video on YouTube, I Come From Two Indias, which was part of his performance at the Kennedy Center in Washington, DC, talking about the duality of the country, stirred up a hornet's nest with many accusing the actor-comedian of insulting India.

Meanwhile, the annual round-up, YouTube Rewind, after many roadblocks and criticism in plenty -- the 2018 rewinds remains the most disliked video ever posted to the platform -- has been cancelled for good with the company shifting focus to more advertiser friendly choices. 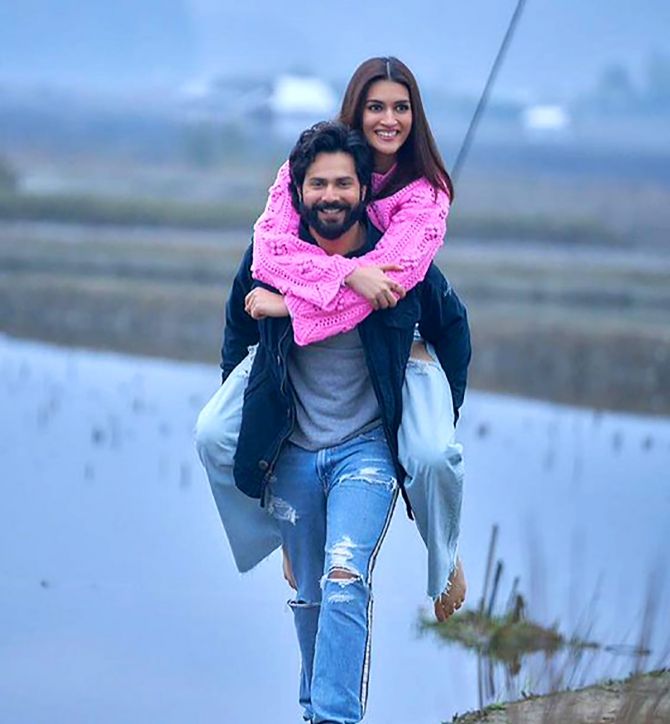 We have had too many zeroes since an errant virus grounded the world for us to talk about any more. Instead, let's talk about a new location that the Bhedia team discovered in the midst of the on-going pandemic.

Not many would have heard about Ziro earlier, but they will see it in all its picturesque glory now in the horror comedy.

It's a town in Arunachal Pradesh included in the Tentative List of UNESCO's World Heritage Site for the Apatani cultural landscape.

A video from the sets shared by Kriti Sanon of co-star Varun Dhawan cutting a cake and feeding a piece, not to the birthday munchkin who had her mouth open in anticipation, but her father, quickly went viral.

The disappointment on the little girl's face disappointed social media till the actor clarified that the child had got her piece of cake... And had eaten it too. 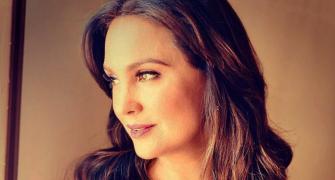 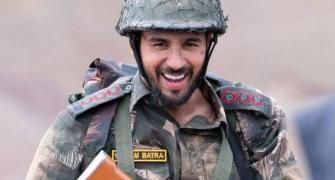 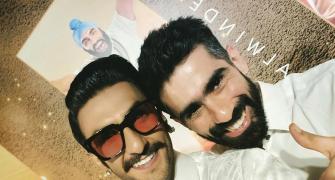 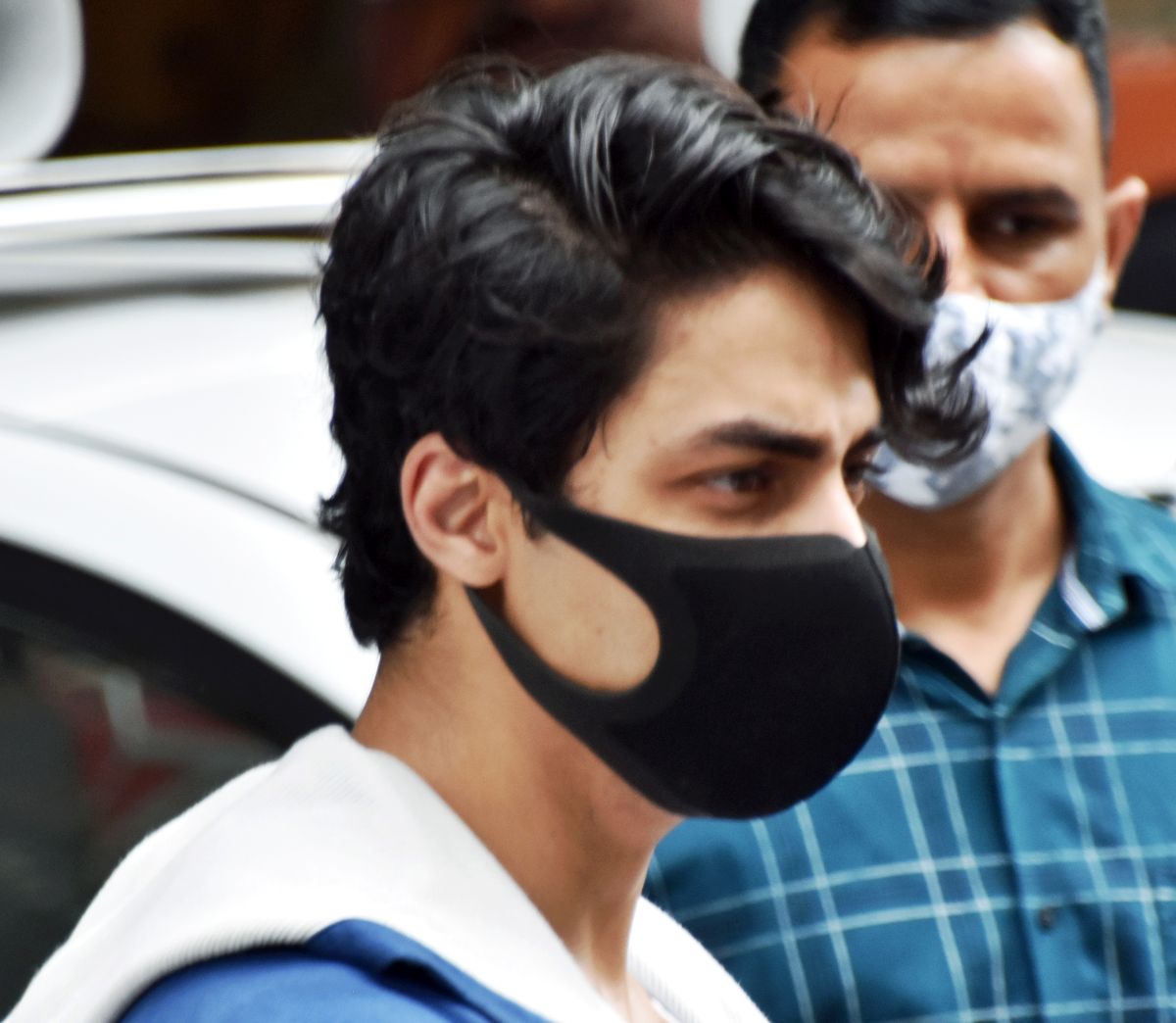 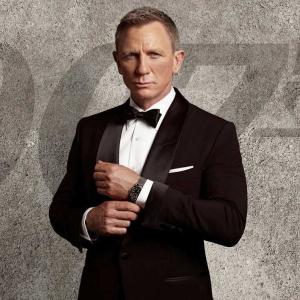