'Captain Vikram Batra, PVC and his unit 13 Jak Rif did stand out because of the sheer magnitude of the task allotted to them but also the exceptional professionalism with which it was executed and completed,' recalls Lieutenant General Syed Ata Hasnain (retd). I agreed to view Shershaah in its 'first day first show' mode on OTT because my expectations from the film were exceptionally high; and of course I had to write this review.

The film did not disappoint me and in fact I enjoyed it very much. I knew first hand of the exploits of different units and some of their heroes during the Kargil War (Operation Vijay) from the briefings I attended at HQ 15 Corps in Srinagar every day in May-July 1999.

Captain Vikram Batra, PVC (P) and his unit 13 Jak Rif did stand out because of the sheer magnitude of the task allotted to them but also the exceptional professionalism with which it was executed and completed.

It's a deserving biopic based on a character who became a virtual icon with the rendering of his famous lines -- 'Ye Dil Maange More' and 'Ya to Tiranaga Lehra ke aaunga, ya Tirange mein lipta ke aaunga, par aaunga zaroor (I will either raise the Tricolour in victory, or come back wrapped in it).'

It was India's own CNN moment when a war at one corner of the LoC in J&K's Kargil sector started to be televised and reached drawing rooms all over India in May-July 1999.

The Indian Army has always been revered by the Indian public for all the challenges, trials and tribulations its soldiers underwent at India's hugely challenging borders, particularly in the Himalayan region. Yet it's only during this war that the public got an idea of the enormity of those challenges since foreboding snow clad heights, firepower and the sheer indomitable spirit of the soldiers could be seen on display on television screens.

Pakistan's army chief General Pervez Musharraf had drafted an ambitious plan for occupying some heights on the Indian side of the Kargil LoC for a larger strategic gain which included the forced evacuation of the Siachen Glacier by India. These heights by unwritten agreement were vacated by both sides every winter and reoccupied the next spring/summer.

The context of the film is the period just after Prime Minister Atal Bihari Vajpayee had initiated a peace process with Pakistan in February 1999 with much bonhomie in the air.

The starkness of the situation was that within three months of Vajpayee's Lahore Yatra for peace India was at war to evict the Pakistani occupation.

There were insufficient troops at Kargil to undertake the operations to push back the Pakistani occupation force. That is why Captain Vikram Batra and 13 Jak Rif along with many other famous infantry units which were then doing service in the Kashmir valley at that juncture were moved to Kargil to recover the occupied areas, under 8 Mountain Division. 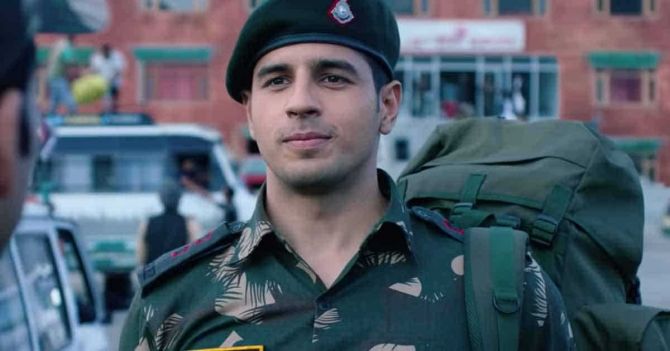 The above context is important to understand the film and the sequence of events without which there won't be informed viewing because almost half the film is set in the Kashmir Valley and the other half in Kargil.

Vikram Batra, the son of a teacher from Palampur, is a gregarious youngster with a passion to be a soldier, an officer in the Indian Army. It's his personality that is the draw; confidence in everything oozes out of him.

The film reveals how quickly after commissioning and arrival at the unit he establishes himself in the eyes of his troops and the local Kashmiri population with his friendly and professional demeanour. In fact as a young lieutenant he gives a couple of lessons in conduct of operations to some seasoned soldiers; among those lessons is empathy.

The Kashmir Valley episodes and young Batra's slow and steady rise in esteem is captured through a series of sequences showing some typical operational situations. It is officers such as Vikram Batra who leave a mark because of their ability to combine the basics of human goodness with the grit and emotionless functioning in many professional situations.

This is again starkly captured and may not be evident to the audience unless one is schooled in the ways of soldiering.

The sequences in the Valley are exceptionally well directed and carry a stamp of authenticity.

13 JAK RIF's camp layout, vehicles, insignias, weapons and tactical conduct have all been very well researched, directed and enacted. It's only a military mind or just someone with experience in the Army who may find some minor faults such as physical training being performed on the roads in a counter terror zone.

However, I was quite clear that I was watching the film to enjoy its authentic story, sequences and depiction and not for nitpicking and fault finding.

Within 15 minutes of its commencement my propensity to look for faults vanished because the sequences got better and better.

The ambush scene in Sopore is authentically directed and some good research appears to have been behind it. It is to the credit of the ongoing proxy conflict in J&K that many young officers have emerged with exceptional experience in command of troops under adversity.

This has helped them achieve much at the LoC in war and warlike situations. Vikram Batra was one of those. 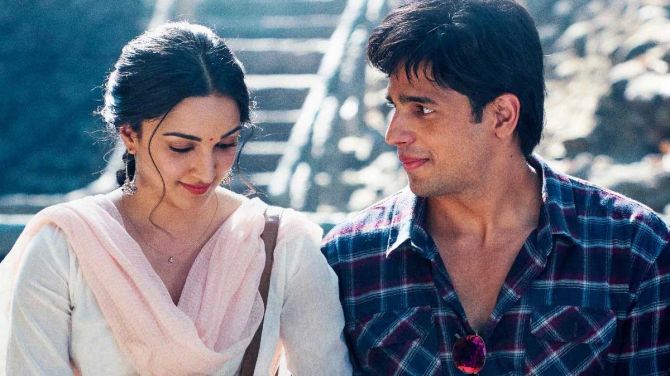 Interspersed with the operational sequences in Kashmir and bits of banter in the officers' mess are scenes of a blossoming romance.

For a man of Vikram Batra's stupendous courage and energy revealing his romantic side was a must even if it had to be done to give the film a balance.

Kiara Advani does a creditable job as Dimple Cheema, Vikram Batra's girlfriend and virtual wife (he is assumed to have married in a gurdwara).

There aren't too many songs, but the few that are, are melodious and lilting.

The scenes of his life away from the army are simple and charming; everything is with balance.

It is his valorous acts in Kargil which made Vikram Batra a national icon.

The film's transition from Kashmir to Kargil may be considered by some as too abrupt and without adequate buildup. But that is exactly how the transition actually happened.

As such symbolically it is right, but the audience may take a little time to absorb the short explanation that is offered in commentary.

Perhaps a scene of a short briefing by a middle level army officer highlighting just what was happening on the entire Batalik-Kargil-Dras front would have been helpful for stamping an image on the public mind.

The best part is that the filming of the Kargil episode is done in Ladakh itself; it adds much authenticity because mountains of this variety could not be found elsewhere.

The one message that the film gives very appropriately and sets right an awkward perception in the public mind is about the position of officers in various operations.

There appears to be an idea that officers sit and give orders from far behind. One can see here how the rank and file of 13 Jak Rif follows its officers in every situation.

Kargil was all about junior leadership and the film projects that more than adequately in the various scenes showing the capture of the foreboding heights.

The film is a biopic no doubt but does not err in getting only the character of Captain Batra to hog the limelight. There is a lot of focus on the other officers of the unit who played stellar roles in the unit's performance.

The character of Lieutenant Colonel Y K Joshi, CO (commanding officer) 13 Jak Rif is also well captured although his actual role in the combat situations was much more.

The public should realise that a CO is almost always right up there with his officers and jawans and not just guiding by radio calls from behind.

Joshi did not win a Vir Chakra for nothing. He is today the Army Commander Northern Command Udhampur and the Indian Army is proud of such leaders.

Shataf Figar plays Joshi although he does not resemble him one bit. But that is not important either. 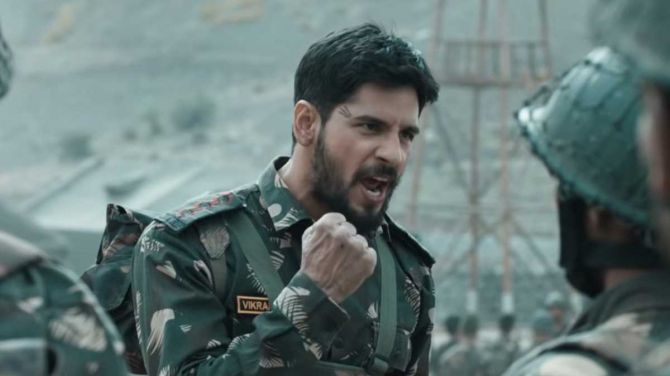 A slight criticism before I take on some other aspects of the film.

The two attacks led by Captain Batra cover a long set of sequences (perhaps 30-40 minutes). They are obviously filmed at the same set leaving the audience to view the same terrain, same bunkers and everything similar over an elongated time.

I was bored and was looking for change. Creating a set of bunkers at a different point may not have been such a challenge, or such a bad idea.

Siddharth Malhotra fits the character of Captain Vikram Batra just perfectly; a very good choice and compliments to him.

Nonchalant, passionate and caring with an easy cheer sums up that character. Soldiers love such officers and will follow them anywhere. I can see this film charging up the nation again just as Uri, the Surgical Strike did.

A word has to be reserved for Vishnu Varadhan, the director. I wish he will be involved in some more biopics of great Indian military heroes. This one is a great job done.

As the joint producers, Karan Johar and Shabbir Boxwala can sit back and take a lot of credit too. 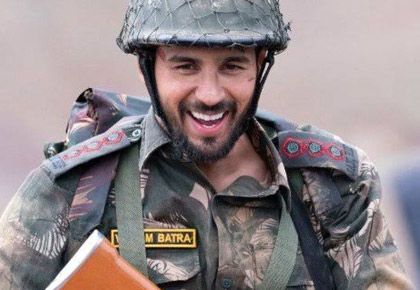 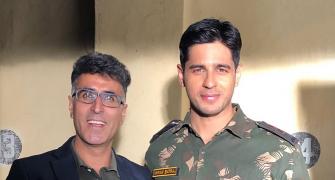