America is in chaos. Hackers are shutting down every computer system and network in the country, and cop John McClane is huddled up with a couple of geeky hackers in a basement that couldn't be any nerdier. The chief baddie, a deranged superhacker, makes his ultimatum clear, via webcam.

A distraught McClane (Bruce Willis) turns to his hacker buddies to start coming up with a plan, placing his hand over the webcam as he talks. He's interrupted by the villain, Thomas Gabriel (Timothy Olyphant). 'Mr McClane, covering the camera does not turn off the microphone.'

'nuff said. Bruce Willis, now 52, isn't the yippee-ki-yay mo*bleep* cowboy he once was -- and even if he were, he's way past his sell-by date. Compared rightly (and obviously All-Americanly) to a Timex watch in a digital age, McClane can't cope with the country taken over by vindictive hackers.

All he knows is that these guys need to be shot. Oh, and he needs to save his daughter -- there's always gotta be some emo-involvement for John. It's as blockbuster as it gets, and the reason we love McClane -- who calls an astonishingly acrobatic villain names like spider-boy -- is because he's old-school.

So here we have this big, big, big film, the most amped-up Die Hard ever, full of explosions and chases. It's not as bloody as the other films, and bald John ain't as given to death and the profanity as we're used to -- though one assumes the latter will be much affected by the DVD release, free of the unholy PG-13 rating the big-screen release is straddled with. This one is more a typically summer blockbuster than the gritty violence the franchise is known for. 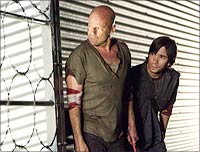 Sure, there's some John McClane 'wit', but while some of it is nostalgic and fun, mostly it's obvious and contrived. He orchestrates a car crashing into a helicopter, and when his hacker sidekick Matt Farrell (Justin Long) marvels at the feat, he shrugs it off. 'I was out of bullets,' McClane tosses at the audience, evoking grin and grimace in equal, simultaneous measure. Yeah, it's that kinda movie -- and heck, it's been a while.

Oh, and about the rejoinder to McClane's unforgettable 'yippee-ki-yay' quote, well, it's there, and a bullet runs through it. Hell, that hurts.

As is convention for any decade-old action hero returning to the big screen, Willis finds much room for fathering his sidekick. Long, the less-malevolent of the genius hackers, starts off unrealistically cocky, but grows to predictably awed admiration. Besides, with a life increasingly under fire, there're few of us who wouldn't feel safer on John's side.

Anyway, as mentioned in the beginning, America is under threat. In this world of Youtube, the hackers trade letters clipped from newspaper headlines for a montage of words taken from various Presidential speeches to piece together their (admittedly goofy) threat to the nation. It's a fun idea, going from Clinton to Nixon to long stretches of George W Bush to make their position clear, reminiscent of all those movies with rubber President masks used for bank jobs. Gabriel and his svelte lover Mai (Maggie Q) are shutting down all systems, one by one.

Is it a coherent plot? Heck, no. It's just a big disaster movie, but thankfully, there's enough raw pace to keep you relatively involved in John's story, without worrying about the inconsistent details -- which include a mysterious computer virus capable of actually making your hard drive explode.

The stunts are massive, yet mercifully not overdone, graphically speaking. The film is pretty old-school in its overall styling, and the meat is well done. You may be a stunning, lethal hacker-assassin, but as Maggie Q discovers, when you try and kick John McClane's bottom, he responds in kind, worrying not about chivalry as he punches the villainess in the chomper, again and again and again. And that's him on mild, of course.

There's lots to whine about, particularly an overlong second half -- a 30-minute trim would have done the film a whole lot of good, as would a lot more Maggie Q, arguably the sexiest hacker ever -- but it's pretty much as good as it gets. The first Die Hard was a savagely funny actioner with a great character, a film that worked outside of traditional action audiences just as well. The second and third films sucked, and this one is a standard-issue Hollywood summer release -- lots of bang and boom, a dollop of avoidable emotion but enough testosterone to soak your popcorn in.

The only reason this film works is because of Willis. He wears John McClane like a raggedy second skin he's more than used to, and it's an irresistible performance from an actor arguably past his prime -- well, his primest, anyway. This is more a roleplaying job than an acting one, and -- exuberant as a 12-year-old with a plastic stengun -- Willis has a blast. It's totally worth it to watch him play.

In the end, of course, it's all about welcoming back John McClane. And you know what they say about old memories.