The Bihar government, realising that it does not have the jurisdiction to probe the case, is now adopting this 'illegal method' of recommending the case to be handed over to the CBI, says Rhea's lawyer. "Bihar DGP (Gupteshwar Pandey) had a talk with the late actor's father K K Singh today. The DGP has informed me that the father has asked for a CBI probe into the case," Kumar said, adding, "The state government would formally recommend the case to be handed over to the CBI today itself after completing all the procedures and formalities."

A close associate of the CM told PTI that Rajput's father made a plea for the CBI inquiry, citing hurdles created by the Mumbai police to the investigating team of the Patna police, who are in the city to pursue inquiry into the FIR lodged by him.

Rhea Chakraborty's lawyer, on the other hand, said the Bihar government cannot recommend a CBI probe as the police from that state do not have any jurisdiction to even investigate the case.

'There cannot be transfer of a case which had no legal basis to begin with for the Bihar police to get involved. At the most, it would be a Zero FIR which would then be transferred to the Mumbai police,' Satish Maneshinde, Chakraborty's lawyer, said in a statement.

The transfer of a case, in which they (the Bihar police) had no jurisdiction, to the CBI has no legal sanctity, he said.

The Bihar government, realising that it does not have the jurisdiction to probe the case, is now adopting this 'illegal method' of recommending the case to be handed over to the CBI, Maneshinde stated. Chakraborty filed a petition in the Supreme Court lastr week, stating that the Bihar police has no jurisdiction to probe the case as the Mumbai police have already registered an Accidental Death Report.

'Rhea Chakraborty has always been living in Mumbai. She was in Mumbai on June 14, 2020. She was not allowed to attend the funeral of Sushant Singh as her name was struck off from the list of 20,' Maneshinde said.

Rhea was summoned by the Mumbai police on June 18 at the Bandra police station, north west Mumbai, her lawyer said, adding that 'her statement was recorded there.'

'Subsequently, she was summoned to appear on July 17 at Santa Cruz police station (north west Mumbai). She appeared and recorded her supplementary statement,' Maneshinde added.

'Later, when the Bihar police came to Mumbai to investigate the case on the basis of an FIR registered in Patna, Rhea approached the Supreme Court and filed a transfer petition on July 30 for transfer of the case to Mumbai in view of the legal position that a case registered beyond the jurisdiction of the local police station where the alleged incident has taken place can only record a 'Zero FIR' and transfer it for the investigation to Mumbai where the criminal law has already been set in motion,' the lawyer explained.

'The Bihar police has no jurisdiction to investigate the case legally and otherwise,' he added.

Rhea's lawyer also said she is cooperating with the Mumbai police and she was always available for the investigation whenever called.

The Bihar police have recorded the statement of Siddharth Pithani, Sushant's friend and creative content manager, in connection with the actor's death, an official said.

Pithani was staying with the actor for the past year, the police earlier said.

The Bihar police also recorded the statement of Rajput's manager Deepesh Sawant, the official said, adding that they have so far recorded statements of 10 people.

Pithani had e-mailed the Mumbai police on July 28, alleging that Rajput's family members had pressurised him to give a statement against Rhea Chakraborty.

"In the mail, Siddharth said he received conference calls from the family members of Rajput and an unknown number on July 22, in which they asked him questions regarding Rhea Chakraborty and her expenses during her stay at the Mont Blanc apartment (in Bandra) with the late actor," a police official had told PTI on July 31.

"He said that on July 27, he again received a phone call, in which a family member of Rajput asked him to give a statement against Rhea Chakraborty to the Bihar police," the official added.

"Siddharth said the family member told him that he would get a phone call soon. Accordingly, he received a call from an unknown WhatsApp number, which ended within 40 seconds and hence he could not give any statement," the official said.

Pithani, who was a flatmate of the late actor, alleged in the mail that he was being pressurised to record a statement against Chakraborty about things which he was not aware of, the police officer said.

Bihar DGP Gupteshwar Pandey lashed out at the Mumbai police saying that if they are 'so efficient", they should reveal their findings in the Sushant case.

"The FIR that has been filed with the Bihar police in Sushant's death case includes criminal breach of trust, misappropriation, embezzlement of property. Sushant was not married and his legal heir is his father," Pandey stated.

"Hence, his father has filed a case in Patna on the basis of a partial cause of action being here as well as he stays here. How will he fight a case in Mumbai as he will not be safe there?" DGP Pandey told ANI.

"If the Mumbai police is so efficient, it must tell the nation and Sushant's father about its findings in Sushant's death case. They have closed the communication channels as they are not responding to my calls as well. There is anger against thr Mumbai police in the entire nation," Pandey claimed. 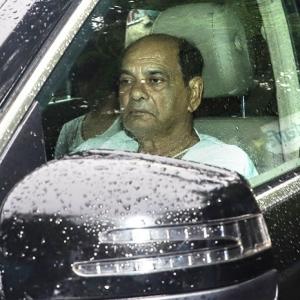