News
Business
Movies
Sports
Cricket
Get Ahead
Money Tips
Shopping
Sign in  |  Create a Rediffmail account
Rediff.com  » Movies » Told cops in Feb that he was in danger: Sushant's dad

Sushant Singh Rajput's father K K Singh has revealed that he had filed a complaint with Mumbai police in February claiming his son's life was in danger. The revelation came as he filed an FIR with Patna police, alleging Mumbai police of inaction even after 40 days of the actor's sudden death.

In a self-made video, Singh alleged that the accused in the actor's death case is on the loose and Patna Police should be provided with help.

"On February 25, I informed Bandra Police that the life of my son Sushant is in danger. He died on June 14 and I asked them to act against people named in my Feb 25 complaint. No action has been taken even 40 days after his death. So, I filed FIR in Patna. Patna Police swung into action. But the accused is running away(on the loose). Patna Police should be given help. I thank Chief Minister Nitish Kumar and his colleague Sanjay Jha who gave support to the truth in this hour of grief," he said.

After the actor's demise on June 14, he asked the police to take action against the people named in the complaint given by him on February 25, said Singh, adding that no action has been taken.

An FIR was filed by Patna Police against actor Rhea Chakraborty in the Rajput's death case under several sections of the Indian Penal Code including abetment of suicide.

Bihar Police started the investigation and dispatched a team to Mumbai.

A controversy erupted after Patna Superintendent of Police Vinay Tiwari, who is probing the case was quarantined in Mumbai.

According to the Maharashtra Police, statements of 56 people have been recorded until now in connection with the case.

In a video statement issued by her lawyers, Chakraborty said that she has faith in the judiciary and she will get justice.

The actor refrained from commenting on "horrible things" being said against her saying that the matter is sub judice.

"I have immense faith in God and the judiciary. I believe that I will get justice. Even though horrible things are being said about me in the electronic media. I refrain from commenting on the advice of my lawyers as the matter is sub judice. Satyamev Jayate. The truth shall prevail," Chakraborty said in the video statement.

Days after Rajput's death, Chakraborty said she was the "girlfriend" of the 'Dil Bechara' actor while requesting a Central Bureau of Investigation inquiry in the case.

Rajput was found dead at his Mumbai residence on June 14.

Chakraborty has also approached the Supreme Court for transfer of investigation to Mumbai in the FIR registered against her in Patna.

ther K K Singh has revealed that he had filed a complaint with Mumbai police in February claiming his son's life was in danger. 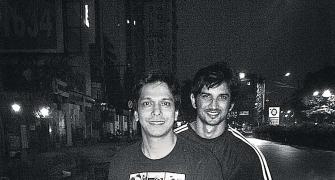