Tamil Cinema 2002: When The Stars Failed

2002 was an interesting year for Tamil cinema. 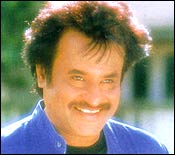 But the film was like a balloon blown so huge that it burst with a bang. It took some time for distributors, theatre owners and Rajni fans to recover from the rude shock.

Then, Rajnikanth stunned everyone. He called all the distributors who suffered losses from Baba's failure and compensated their losses in cash. This was the first time in Tamil film history -- perhaps in Indian film history -- that a star had done something like this.

The developments that followed Karnataka's refusal to release water from the Cauvery river to Tamil Nadu would make a wonderful script.

Director Bharatiraja called all Tamil film artistes to join hands and stop power being sent to Karnataka from the central government's Neyveli power plant, located in Tamil Nadu, in retaliation. Only Rajnikanth objected to what he called a cheap gimmick.

An infuriated Bharatiraja started a tirade against Rajnikanth. He called Rajnikanth (a Maharashtrian who grew up in Karnataka) an outsider who had no love for the Tamil people who had nurtured and loved him abundantly. Rajnikanth refused to be drawn into a verbal duel, but Bharatiraja's attack was so fierce that the star eventually held a press conference, something he has not done for several years, and announced his decision to fast for water from Karnataka.

All the major stars except Rajnikanth assembled at Neyveli at a rally in protest against Karnataka. Except for rhetoric from some stars the rally was a damp squib. The very next day, Rajnikanth went on a fast in Chennai. His fans turned out in large numbers to support him.

Eightyfour Tamil films were released during 2002. Twenty of them ran for 100 days. Not bad, considering the pathetic situation in other states. Superstars Rajnikanth and Kamal Haasan may not have satisfied their fans but a

small film made with unknown faces raked crores of rupees.

Thulluvatho Ilamai was the biggest and surprise hit of 2002. Made for teenagers, the film tackled their problems and the generation gap that exists between parents and children. By taking the children's side and preaching to parents, the film was loved by youngsters. Of course, there were some titillating scenes too.

Two more films brought in crowds -- Gemini, directed by Saran, starring Vikram and Kiran, and Run, directed by Lingusamy, starring Madhavan and Meera Jasmine. Gemini was the most talked about film of 2002. The song O Podu, sung by Anuradha Sriram, such a rage among youngsters that many attributed Gemini's success to it.

Artistically speaking, Bala's second film Nanda, Thankar Bachan's Azhaki and Mani Ratnam's Kannathil Muthamittal were considered the best films of 2002. Bachan's second film released during Diwali, Solla Marantha Katha, disappointed many who liked his earlier film. But like Azhaki, it caught the attention of Tamil audiences and is still running in many theatres.

It was Vikram's year. By the end of 2002, Madhavan had caught up with him with Run's success. If it was a disastrous year for Rajnikanth, it was slightly better for Kamal Haasan whose comedies, Pammal K Sambandam and Panchathantiram, did reasonably well at the box-office, recovering their cost unlike his Aalavandan. For Vijayakant, the year-end brought some cheers as his Diwali release, Ramana, in which he played an elderly college professor, was a winner. But his earlier films, Devan and Rajyam, were disasters.

After the debacle of Red and Raja, Ajit needed a hit. To some extent, Villain, his Diwali release, redeemed his position as the top hero. It was not a great year for Vijay either, but none of his films bombed at the box-office.

Surya caught the attention of audience and critics with his excellent performance in Nanda.

though his films bombed at the box office -- and Srikkant, whose first film Rojakkoottam was a hit, are the Tamil film industry's rising stars. Shaam's Bala -- in which he appeared as an action hero -- and Srikkant's second film, April Maadathil, are doing average business.

Among the actresses, Simran, Meera Jasmine and Sneha made a mark. Simran graduated from glamorous parts to roles with some substance. Tamil audiences were pleasantly surprised to see her as the mother of three children in Kannathil Muthamittal. She also turned in a great performance in Ramana as a mature woman.

Now that Simran has moved to a different niche, Sneha took her slot. Having acted with young heroes in all her six films, she caught the attention of the younger generation. So also Meera Jasmine who bagged several prestigious films, including Bala's Pithamahan.

Complains film historian Theodore Bhaskaran, "There were many new directors but they did not bring any new idiom or style because they had been trained by earlier directors.

"A film that made a difference was Azhaki by Thankar Bachan," Bhaskaran pointed out. "His style was different. B Lenin got the Best Director National Award for Oorukku Nooru Per, but that a Tamil director got the Best Director Award went unnoticed in Tamil Nadu, an indication of the lack of sensitivity to good cinema. Nanba Nanba by Jayabharathy also went unnoticed."

"2002 was a disappointing year except for these three films," he continued. "It is even more disappointing because they could not bring any change in the sensibility of the audience and other filmmakers." 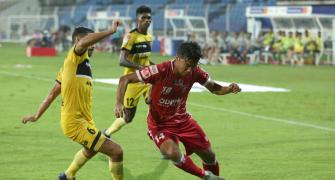